"Israel, as an occupying power, has a responsibility to provide vaccines to the Palestinian people," the first-term congressman asserted in a letter to Israel's acting consul general. 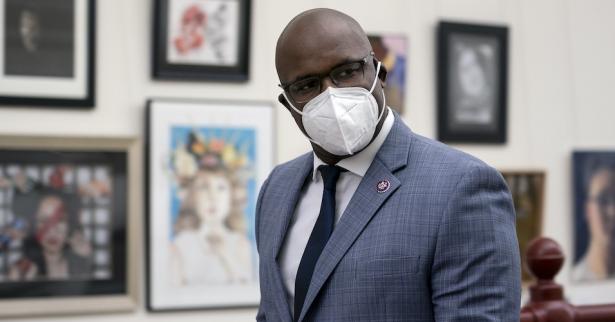 Rep. Jamaal Bowman was widely praised by human rights advocates on Tuesday for his letter calling on Israel's government to vaccinate Palestinians living under Israeli military occupation againt the coronavirus.

"There is no question that the pace of Israel's vaccine rollout with its citizenry has been commendable," Bowman (D-N.Y.) wrote to acting Israeli Consul General Israel Nitzan.

"I was heartened to read that the Israeli government has recently agreed to transfer 5,000 doses of the vaccine to Palestinians to immunize front-line medical workers," Bowman stated, "but the entire population in the West Bank and Gaza must also be covered."

According to the Fourth Geneva Convention, which obligates an occupying power to provide "adoption and application of the prophylactic and preventive measures necessary to combat the spread of contagious diseases and epidemics," Israel, as an occupying power, has a responsibility to provide vaccines to the Palestinian people. It is therefore concerning that Israeli settlers in the occupied West Bank will be receiving the vaccine from the Israeli government, but the Palestinians in the West Bank will not.

"As a Black man living in America, I know the feeling of being neglected by my government and society, of feeling like a second-class citizen or not a citizen at all, in my own home," Bowman wrote. "I can understand the feelings of hopelessness and despair that Palestinians living in the West Bank might feel, reading in the news that the Israeli government has no plans to vaccinate them from a deadly disease wreaking havoc around the globe."

"Every single human being, regardless of their race, gender, sexual orientation, color, or creed, has the right to be protected from a common, invisible enemy of humanity," Bowman concluded. "Covid-19 has already claimed over two million lives around the world. I am hopeful that you will agree, and build on your government's proven success and expertise in distributing the vaccine by expanding access to all people living within Israel's borders and in the occupied territories."

Bowman—who has previously called for an end to Israel's illegal 53-year occupation of Palestinian lands—is one of several U.S. lawmakers to recently criticize Israel for what many human rights advocates are calling its "vaccine apartheid."

"It's really hard to watch as this apartheid state continues to deny their own neighbors, the people that breathe the same air they breathe, that live in the same communities," Rep. Rashida Tlaib (D-Mich.), the first Palestinian American elected to Congress, said last month.

Tlaib and Rep. Ilhan Omar (D-Minn.) were among those who on Tuesday joined human rights groups in praising Bowman's letter.

Many defenders of Israel bristle at the use of the word "apartheid" to characterize the policies and actions of the government of the self-described Jewish nation-state.

However, critics—including survivors of South African apartheid and the Holocaust, Israeli and international rights groups, and former U.S. President Jimmy Carter—have all accused Israel of practicing apartheid, both within its own borders and illegal settler colonies, and in the occupied territories.

Israel—which was established in 1948 largely through the ethnic cleansing of over 700,000 Palestinians from land that was formerly a British mandate and, for 400 years before that, a province of the Ottoman empire—does not officially acknowledge that it is occupying the West Bank and East Jerusalem. Nor do many Israelis and their supporters recognize the existence of the Palestinian people.