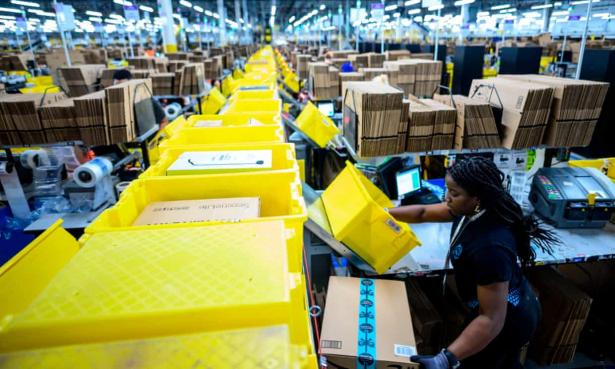 An Amazon warehouse in Staten Island, New York. Efforts to unionize warehouse workers have popped up at fulfillment centers across the country., Photograph: Johannes Eisele/AFP/Getty Images

Amazon warehouse workers in Alabama will be allowed to conduct a union election by mail, the US’s top labor relations agency said on Friday, in a major blow to the online retail giant’s intense anti-union efforts.

The National Labor Relations Board (NLRB) ruled that union ballots for workers at Amazon’s Bessemer fulfillment center, located outside of Birmingham, can be mailed out on 8 February after Amazon raised objections to the vote taking place by mail.

Voting by mail has become commonplace during the pandemic. But in an appeal to the NLRB, attorneys for Amazon argued that a mail-in election would take too long and involve too many resources. Amazon proposed in January that the election take place in person over the course of four days in the fulfillment center’s parking lot, even as Alabama sees about 2,000 new cases of coronavirus every day.

On Friday, the NLRB said in a brief ruling that the company “raises no substantial issues warranting review” and denied Amazon’s attempt to delay the election.

About 5,800 employees are expected to receive union ballots. The Retail, Wholesale and Department Store Union (RWDSU) is leading unionization efforts and will represent the workers if they vote to unionize.

Amazon’s business has been thriving during the pandemic, but the company has been criticized for not implementing safety measures in its warehouse as the virus raged.

Leading up to the union vote, Amazon launched a campaign attempting to strongly discourage workers from voting to unionize. The company set up an anti-union website and sent texts to workers claiming that unionizing means “giving up the right to speak for yourself” and that the union will be taking “your money for nothing”.

“Once again, Amazon workers have won another fight in their effort to win a union voice,” said Stuart Appelbaum, RWDSU president, in a statement following the NLRB’s ruling.

“Today’s decision proves that it’s long past time that Amazon start respecting its own employees; and allow them to cast their votes without intimidation and interference.”