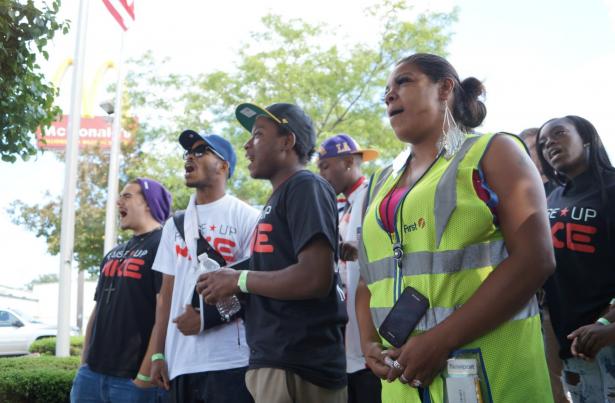 Fast-food workers in 15 cities will hold a Black History Month strike on Tuesday to demand that the McDonald’s, Burger King and Wendy’s restaurant chains pay them $15 an hour.

The action comes as Congress prepares to debate a federal rise in the minimum wage to $15 from its current rate of $7.25, the first federal raise since 2009.

Workers in cities including Atlanta, Charleston, Chicago, Detroit, Houston and St Louis will be joined by home care and nursing home workers in support of a $15 minimum wage and the right to join a union.

Joe Biden pledged to increase the minimum wage during his election campaign but has recently suggested the increase may not make it into the $1.9tn coronavirus relief package he is trying to push through Congress. Biden has said the increase is central to his pledge to narrow racial economic inequality.

Progressive senators including Bernie Sanders, a longtime supporter of the union-backed Fight for $15 movement, which has campaigned for the rise, and others are working to ensure the federal raise remains in the package.

On Thursday Nancy Pelosi, the House speaker, confirmed the wage rise will be part of the House bill but it faces a tougher fight in the Senate where Democrats have only a slight majority. Democrats hope to pass the bill through a process known as “budget reconciliation” which would require only a simple majority in the Senate.

“This Black History Month, we have a chance to make our own history by winning a living wage of at least $15 an hour and lifting millions of families out of poverty,” said Taiwanna Milligan, a McDonald’s worker from Charleston, South Carolina.

Milligan added: “For decades, McDonald’s has made billions in profit off the backs of workers like me, paying us starvation wages. I’m striking today because I need at least $15 an hour to survive and because I know the only way to make change is to stand up, speak out and demand it.”

The eight-year Fight for $15 movement has made significant progress in recent years with states including California, Florida and New York voting to increase their minimum wages to $15 an hour.

While polling shows the increase is favored by the majority of Americans, opposition remains from most Republican politicians, some Democrats and lobby groups.

A Congressional Budget Office report published this week calculated 27 million Americans would benefit from a raise and 900,000 people would be lifted out of poverty. But the report also cautioned the raise would cost 1.4m jobs and add significantly to the nation’s debt. The findings have been disputed by other economists with the left leaning Economics Policy Institute calling them “wrong and inappropriately inflated”.

Gloria Machuca, a 20-year McDonald’s worker from Houston, Texas, said she was currently making $9.50 an hour. “It is not nearly enough,” she said. “Fifteen dollars would mean I could spend more time with my children, not worry about going hungry, paying bills.”

She said passing the bill was even more important during the coronavirus pandemic. “It’s been very worrying,” she said. “It’s very stressful thinking about how I can pay doctor’s bills, having to work when I could get sick.” Missing just one day of work would be a “major setback” for her financially she said.

“My message to President Biden is it’s very important to pass this, it would make a big difference not just for me but for all the others that are struggling.”

Dominic Rushe is business editor for Guardian US. He was part of the Guardian team that won the 2014 Pulitzer prize for public service journalism. Click here for Dominic's public key. Twitter @dominicru

Sign up for the Guardian Today email
All the day's headlines and highlights from the Guardian, direct to you every morning