The Flu Season Didn't Happen This Year. Can We Repeat That?

The promise and peril of this year’s missing flu season. 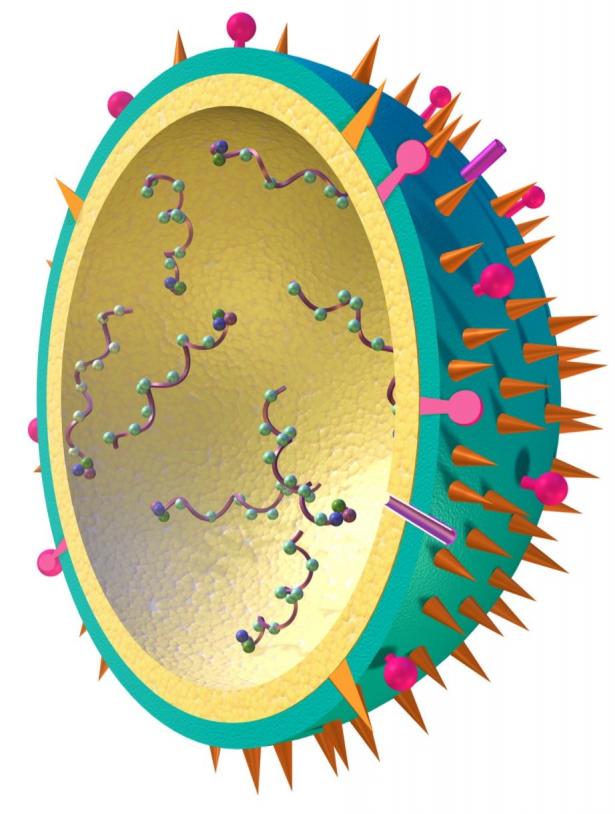 The sum of all our mask-wearing, distancing, business closures, and other, however imperfect, precautions haven’t been enough to stop the Covid-19 pandemic in its tracks. But there’s a silver lining: It has been enough to virtually wipe out the flu this season.

Some of the drop may be because people aren’t going in and getting tested for the flu, or they’re staying home fearing their symptoms might be a Covid-19 infection. But researchers think the decline in actual cases is real and steep.

It’s not just confirmed cases that are down. The CDC’s syndromic surveillance system — which tries to track the disease based on people showing up to clinics with symptoms — is showing historically low levels of the flu. 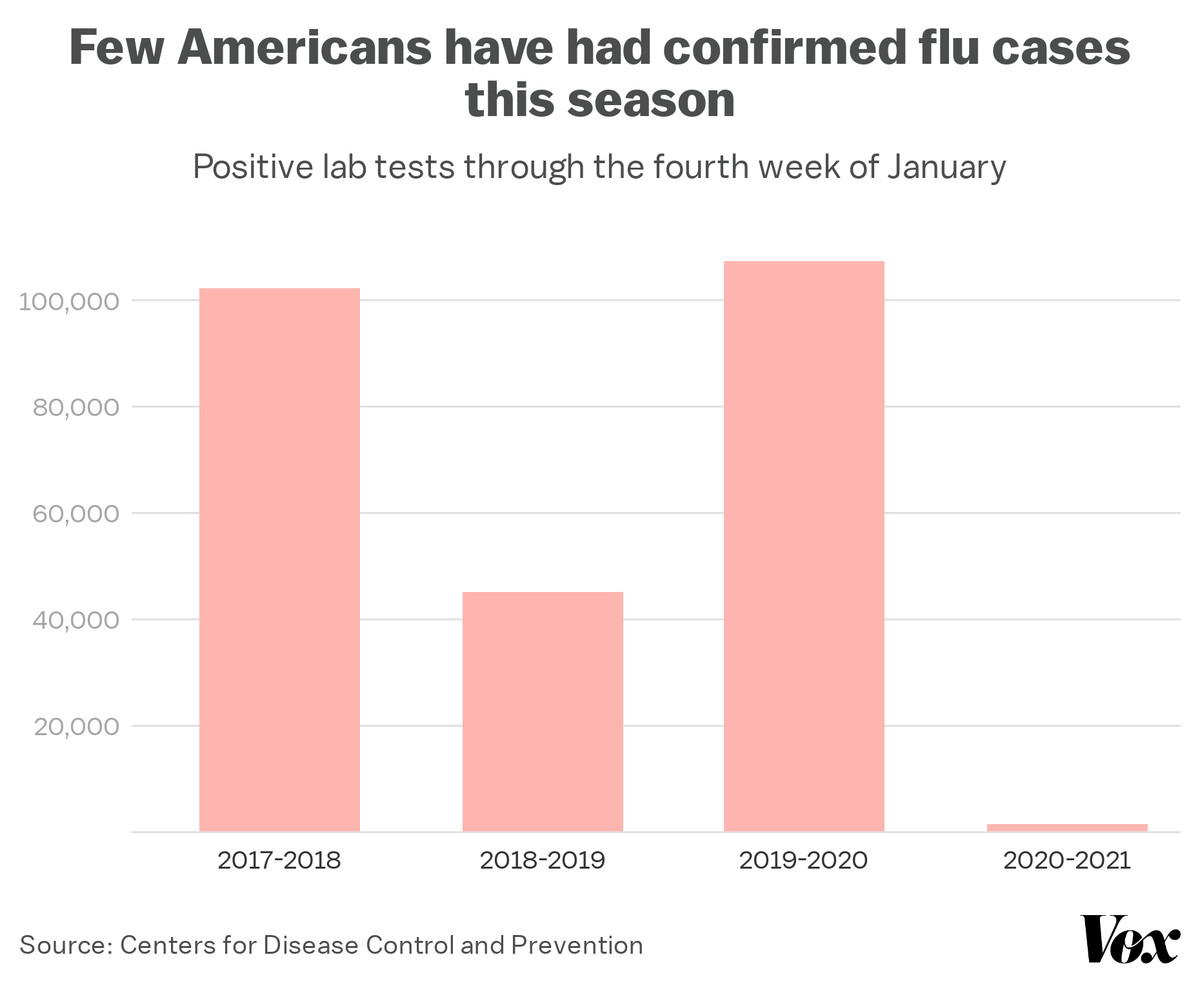 The number of confirmed flu samples in the CDC’s surveillance network. These numbers are more of a snapshot of the seasonal trend; they aren’t meant to be a comprehensive tally of everyone who has the flu in a given season.

The flu trends of this year mean “we have found a way to potentially decrease tens of thousands of deaths each year,” Seema Lakdawala, a flu researcher at the University of Pittsburgh says.

This news contains both a silver lining and a warning.

The good news is that we’ve seen how effective our collective behavior can be in diminishing the burden of the flu. And because of this experience, we may be more prepared to stop a future flu pandemic dead in its tracks.

The warning: Since people aren’t getting the flu this year, that means more people will be susceptible to catching it next year. Kids are especially vulnerable to catching the flu, and next year there will be more children than ever who have never gotten the flu in their lives. This will also make them more likely to spread it. Some adults might also be more vulnerable to get sick with the flu next year. Immunological memory of the virus fades over time, and by the time the next flu season begins, it will have been a year since many adults last received a flu shot.

To lessen the overall burden of future flu seasons, we’ll need to remember some of what we’ve learned during the pandemic. It won’t be tenable to keep all the Covid-19 precautions going after the pandemic wanes. But we should spend some time thinking carefully about what changes ought to remain.

The flu season that wasn’t

This flu season, more or less, hasn’t really happened. It’s not entirely a surprise: During the southern hemisphere’s flu season last year (which occurs during the northern summer — May through September) cases and deaths also fell.

That said, researchers didn’t take it for granted that the flu wouldn’t spread this winter.

“Up until a couple of weeks ago, I didn’t feel like we were out of the woods yet,” Shweta Bansal, a Georgetown University epidemiologist and biologist says. But now that it’s February — typically when the flu season peaks in the US — she feels like a wave of flu just isn’t coming. And it’s not just the flu: Other respiratory viruses, with the exception of rhinoviruses, have fallen dramatically as well.

This is a huge relief: Earlier in the pandemic, scientists were very worried about the strain on our health care systems if the flu was circulating on a large scale alongside Covid-19. The quiet flu season means there are more hospital beds and equipment available for Covid-19 patients, and the health care workers treating those patients are less strained than during a typical flu year.

Researchers don’t think the steep declines are due to more people getting flu vaccines this year. “The vaccination is helping, but there’s absolutely no way that increased vaccination on its own is responsible for this,” Stephen Kissler, an epidemiologist at Harvard says. Yes, flu vaccine uptake is up (around 15.5 million more doses), but it’s not enough to explain what happened to the flu. (The flu is also more commonly spread from contaminated surfaces. So routine surface cleanings may be hygiene theater when it comes to Covid-19, but it could be helping out when it comes to the flu.)

What is responsible? “As far as I can tell, the most consistent explanation is simply that wearing masks and distancing has really done it,” Kissler says.

Why the flu was defeated, but not Covid-19

How could mask-wearing and distancing bring the flu to a halt, while Covid-19 rages on?

It goes back to something scientists were saying at the beginning of the pandemic: Covid-19 is way, way worse than the seasonal flu because it’s more contagious.

Scientists describe the contagiousness of a disease with a figure called R0 (pronounced r-naught). The number describes, on average, how many new cases each case of a disease goes on to generate. For the seasonal flu, the R0 is between 1 and 2. For Covid-19, it’s more likely between 2 and 3, if not a little higher.

To Kissler, this is textbook epidemiology: “Anything that is less contagious [than Covid], but that spreads in a similar way, is going to be brought well below that R threshold of 1, and it’s just going to be wiped out.”

We can feel good that our efforts wiped out the flu. It’s one less burden to deal with during an already difficult year. But there are some optimistic takeaways for the future, too. Let’s say there’s another pandemic respiratory virus, but it’s a little less contagious than Covid-19. If we were to bring the same force of collective action to contain the new virus as now, that pandemic would likely be halted.

Scientists don’t know, precisely, which Covid-19 public health steps are contributing most to the drop in flu cases. But they have suspicions. “﻿It is the lack of travel, the school closures, and the distancing and masking that are making the biggest difference,” says Helen Chu, a physician and epidemiologist at the University of Washington who studies the flu.

It’s hard to definitively say which contributes the most. “The flu disproportionately makes children sick or puts them in the hospital, and so things like school closures have a greater effect on flu than they would for SARS-CoV-2,” Chu says.

But then, “I can’t imagine school closures are doing most of it, because so many places have managed to keep schools open and they still don’t have flu: Australia, for example. They still kept the schools open, and they had no flu.”

While scientists don’t currently know how much each intervention is contributing to the drop in flu this year, they see opportunities to learn more.

“I hope somebody is going to look at this across the United States and try to tease this out by state, because there are so many regional differences in the uptake of masking and social distancing, and school closures,” Chu says. Perhaps those differences in policy and behavior can be correlated with cold or flu outcomes to better understand what worked.

One thing that will help even more: Scientists will watch what happens as Covid-19 precautions are lifted. “We will start to see the circulation of flu and other respiratory viruses,” Kissler says.

So scientists can potentially see which restrictions and behavior changes lead to a higher resurgence in respiratory viruses.

We can use the pandemic to think of how society can shift to prevent more of these infections and deaths in the future. “Seasonal influenza viruses are still a large public health burden,” Lakdawala says. That will still be true after the pandemic ends, and we should remember some lessons from the pandemic to address it.

For instance, in the past, if I had been exposed to someone with the flu, or maybe just a cold, I wouldn’t have thought anything of it. In the future, after the pandemic, I’d consider not getting together with friends or going into the office after an exposure (the flu has a shorter incubation time than Covid-19, so you wouldn’t need to quarantine as long, likely just up to four days). And I’d be sure to wear a mask in public when sick or after being exposed to the virus. The flu, like Covid-19, can spread in the absence of symptoms and people can infect others before they feel sick.

We might even want to be more cautious during flu season and wear masks around others regardless. “Wearing masks in the wintertime, I think it’s something that might be here to stay,” Kissler says. Overall, there should be a greater acceptance of wearing masks in public, so it won’t be as likely to attract stares or confusion.

In the future, employers and employees might have a clearer understanding of the importance of staying home, and getting sick leave when ill with the virus.

“We have many studies that have asked people, ‘Did you stay home because you had the flu? And they would say, ‘No,’” Chu says. “We think coming to work is critical. And we think to stay home when you’re sick is a sign of weakness. I think that’s going to change completely.” Additionally, parents taking care of a child with the flu should be given the time and resources to stay home, so they don’t spread it to others.

All of these actions should come on top of making sure as many people as possible get flu shots. The shots are typically only 40 to 60 percent effective at preventing someone from developing flu symptoms, so even if everyone got vaccinated every year (and typically only about half of Americans do), we should still enlist the new lessons we’ve learned.

We need to be vigilant going into the next flu season

We don’t need lockdowns to mitigate future flu seasons. They would be too burdensome — and unnecessarily excessive — in a typical flu season.

But still, we’ll need a good deal of vigilance, particularly next flu season. Scientists aren’t exactly sure how the flu will evolve in response to this weird new environment.

“We have no idea how obliterating the flu for an entire year affects its evolution,” Kissler says. That might make it harder for vaccine developers to pick the right strains for next year’s vaccines. “We don’t know if it’s going to be easier to predict next year’s flu strain, because it hasn’t been spreading as much. Or if it’s going to be a lot harder, because it’s gone through this really tight what we call an evolutionary bottleneck.”

Here’s what we do know: We can beat back the flu with our behavior. Covid-19, in part, “has shown us how to do it,” Kissler says.

Brian Resnick is a science reporter at Vox.com, covering social and behavioral sciences, space, medicine, the environment, and anything that makes you think "whoa that's cool." Before Vox, he was a staff correspondent at National Journal where he wrote two cover stories for the (now defunct) weekly print magazine, and reported on breaking news and politics.