"This action by Amazon is nothing more than a sad attempt to distract from the facts and shirk accountability for its failures to protect hardworking employees from a deadly virus." 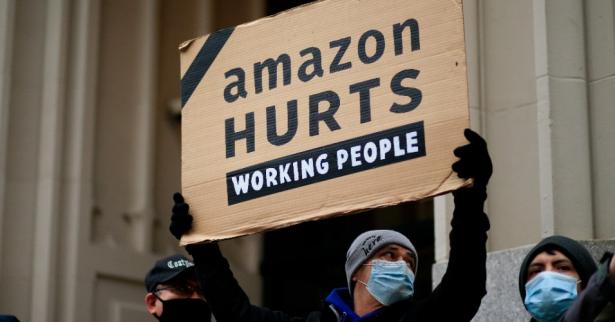 Amazon workers and community allies demonstrate during a protest organized by New York Communities for Change and Make the Road New York in front of the Jeff Bezos' Manhattan residence in New York on December 2, 2020. , Kena Betancur/AFP via Getty Images

New York Attorney General Letitia James responded forcefully on Friday to Amazon's preemptive lawsuit intended to block her from taking legal action against the behemoth corporation over workplace safety during the coronavirus pandemic and the firing of warehouse workers involved in a walkout last spring.

"Throughout this pandemic, Amazon employees have been forced to work in unsafe conditions, all while the company and its CEO made billions off of their backs," James said in a statement about the suit. "This action by Amazon is nothing more than a sad attempt to distract from the facts and shirk accountability for its failures to protect hardworking employees from a deadly virus."

"Let me be clear: We will not be intimidated by anyone, especially corporate bullies that put profits over the health and safety of working people," the state attorney general added. "We remain undeterred in our efforts to protect workers from exploitation and will continue to review all of our legal options."

Amazon on Friday filed a federal suit in the Eastern District Court of New York. The complaint, according to Bloomberg, says James' office "has threatened to sue if the retail giant doesn't comply with a list of demands, which include subsidizing public bus service and reducing production targets required of workers in its warehouses."

The company's complaint also amounts to a lengthy and detailed defense of its actions to protect employees, including a day-by-day chronicle of safety measures it rolled out as the respiratory virus spread around the U.S. in March and April.

"Amazon has been intensely focused on Covid-19 safety and has taken extraordinary, industry-leading measures grounded in science, above and beyond government guidance and requirements, to protect its associates from Covid-19," the company said in its complaint.

James launched an investigation into Amazon after workers—including organizer Chris Smalls, who was later fired—protested conditions at a Staten Island warehouse. The state AG said at the time that "it is disgraceful that Amazon would terminate an employee who bravely stood up to protect himself and his colleagues."

Reporting on the company's move Friday, the New York Daily News noted that "Smalls says that he and another employee, Derrick Palmer, were terminated in retaliation for starting the protests. Amazon has argued that the two employees were terminated for their own failure to comply with health regulations."

The Seattle-based company was founded by the world's richest person, Jeff Bezos, whose wealth has surged during the pandemic. Bezos, who announced this month that he will step down as Amazon's CEO later this year and transition to the role of executive chair, had a net worth of $189.5 billion as of Friday, according to Forbes.

In December 2020, shortly after a global coalition of workers and activists took to the streets on Black Friday to launch the #MakeAmazonPay campaign, 401 lawmakers from 34 countries endorsed the effort with an open letter to Bezos, putting him "on notice that Amazon's days of impunity are over."

Because of people like you, another world is possible. There are many battles to be won, but we will battle them together—all of us. Common Dreams is not your normal news site. We don't survive on clicks. We don't want advertising dollars. We want the world to be a better place. But we can't do it alone. It doesn't work that way. We need you. If you can help today—because every gift of every size matters—please do. Without Your Support We Simply Don't Exist. Please Donate