labor John Sweeney Was Our Era’s Most Influential Labor Leader

The late AFL-CIO leader John Sweeney was an admirable figure who had a vision for reinvigorated US labor unions. But he only tried to reform a union movement that needed a more fundamental refoundation. 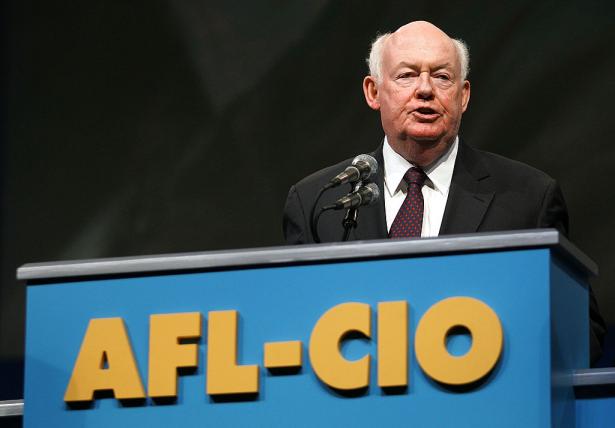 A reflection on the life and work of John Sweeney is challenging because it forces us to distinguish our personal feelings about a man both of us knew and worked with for years from an examination of his historic yet complicated role as a central figure in the US trade union movement.

John Sweeney was probably the single most important US labor reformer of our time. Leading the Service Employees International Union (SEIU), he advanced an internal reform and modernization process that had begun under George Hardy, resulting in the dramatic growth of the union. In 1994, out of disgust with the lethargy in the national AFL-CIO, Sweeney first attempted to move then-president Lane Kirkland out, challenging him and his successor, Tom Donahue, for the presidency of the national federation.  Leading the “New Voices” slate, Sweeney and running mates Richard Trumka and Linda Chavez-Thompson secured a historic win in 1995 and attempted to redirect organized labor.

Assessing John Sweeney in SEIU and the AFL-CIO requires accounting for nuance, personality, and politics. The child of working-class Irish immigrants in New York, Sweeney chose to enter the trade union movement, first through the International Ladies Garment Workers Union and later through SEIU Local 32B/32J in New York City. He became president of SEIU in 1981.

Sweeney was the quintessential labor pragmatist, willing to take big risks, like aligning himself with forces on the Left. But he was not, himself, of the Left. His sensibilities were broadly progressive, and his actions were informed by practical application more than ideology. Sweeney fought for workers, but he was prepared to go only so far due to his acceptance of the parameters of democratic capitalism.

But Sweeney recognized the crisis of organized labor. He and his chief of staff, Bob Welsh, hired left-leaning personnel from across the left-liberal spectrum. You could say that Sweeney turned SEIU staff into the “foreign legion” of organized labor, bringing on board staff from various left political tendencies. Two notable examples were Andrew L. Stern (who would later become president of SEIU and turned against Sweeney in 2005, leading a split in the AFL-CIO) and Anna Burger (who would become secretary-treasurer under Stern). Sweeney looked for capable, experienced organizers, leaders, and educators to revitalize SEIU.

One early test for Sweeney was the Justice for Janitors campaign, directed by Stephen Lerner. Focused on the re-unionization of the building services industry after its neoliberal reorganization had destroyed thousands of unionized positions, this campaign worked in local unions that were progressive or desperate. SEIU employed activist organizing methods like mass mobilizations and community outreach to win.

Sweeney maintained a precarious political balance in SEIU. Conservative leaders had to be reassured that SEIU was not being relinquished to the Left. This meant that certain more conservative local unions were left alone by the International. The exception was where there was demonstrable corruption. That said, Sweeney was not averse to trusteeing locals that were ineffective. Mergers, growth of the public sector, and unity with a large part of 1199/National Union of Hospital & Health Care Employees also grew the Left in SEIU. But while remaining accountable to decisions and mistakes, Sweeney was able to both delegate efficiency to his subordinates and allow staff the room to experiment and fail.

All the while, Sweeney evolved politically. He supported a woman’s right to choose — despite his being a devout Catholic — as well as LGBT rights and leadership development. He encouraged a racially diverse staff and encouraged the union to address matters of racial justice.

He also spoke out when many others were silent. In 1992, when the police were acquitted of the Rodney King brutalization, I [Bill] reported to work and encountered Sweeney. He asked me how I was doing, and I said, “Fine.” Then I stopped and said: “Actually, President Sweeney, I’m not fine. I’m furious about the decision in the Rodney King case!” Sweeney looked at me and expressed his own disappointment with the decision. Later that day, SEIU issued a strong statement against the decision. No such statement would have been posted without Sweeney’s endorsement.

When he won the AFL-CIO presidency, Sweeney brought several senior SEIU staff to the AFL-CIO and attempted to transform the institution. He immediately encountered challenges. Despite repeated requests, he had great difficulty getting needed staff from affiliates. Additionally, Sweeney, did not immediately engage his New Voices coalition, or the other AFL-CIO leadership, in a frank discussion regarding a shared vision of the new AFL-CIO and potential for benefits and risks for the trade union movement. As such, he lacked a binding ruling consensus on the role of the AFL-CIO. This led to fits and starts with various initiatives.

In 1996, I [Fernando] was selected to assess the 602 central labor councils (CLCs) in the United States to determine their capacity to be the foundation for what came to be known as the Union Cities program, i.e., an effort to revitalize regional union movements. A less ambitious effort was undertaken with state federations of labor.

The focus on central labor councils reflected one challenge that Sweeney faced. Union affiliates can ignore the direction of the national AFL-CIO. Central labor councils and state federations of labor cannot. Heading the AFL-CIO was not like running SEIU. The national AFL-CIO cannot control its affiliates in the same manner that a national/international union can, a point frequently missed by people outside of the movement.

Sweeney was hampered by the loss of key allies early in his administration due to the retirement of the Machinist Union president George Kourpias, and the deposing of Teamster Union president Ron Carey. As we noted in our 2008 book Solidarity Divided, this ushered in a breeze from the right wing of the labor movement that discouraged many initiatives.

Reform efforts continued. Of the 602 CLCs, 131 committed to create “union cities,” and some, like the Los Angeles County Federation of Labor (LACFL), revitalized and grew local labor movements. Due to efforts of the LACFL, key affiliates, and immigrant rights groups, the AFL-CIO shifted its traditional anti-immigrant trajectory to become a major national force for immigrant rights. Sweeney also launched the Geographic Organizing Project. A successful effort in Stamford, Connecticut, under the leadership of Jane McAlevey was thwarted when affiliate organizing directors of the AFL-CIO disingenuously undermined the program, feeling threatened by these efforts. When the AFL-CIO was split through the machinations of SEIU president Stern, it was argued that the AFL-CIO paid insufficient attention to organizing. Affiliates’ failure to support the AFL-CIO’s organizing efforts was not mentioned. In 2000, the AFL-CIO sought a new Southern organizing effort, and affiliate support was lackluster. Some were concerned more about money than about the implications for building worker and union power.

In the international realm, there was a breaking with what was known as “AFL-CIA” unionism. Sweeney organized the American Center for International Labor Solidarity (the “Solidarity Center”), and anti-communism was no longer the criteria for support. There were, however, “Cold Warriors” who remained in some leading positions in the AFL-CIO, making this trend inconsistent. That said, relationships were opened with explicitly left-led labor centers, such as the Congress of South African Trade Unions and Central Única dos Trabalhadores (Brazil). Sweeney spoke out regularly against globalization, including through AFL-CIO support for the anti–World Trade Organization demonstrations in 1999. Yet Sweeney’s AFL-CIO sometimes supported retrograde labor centers, as in the case of Venezuela, where the unions were operating against the Bolivarian Revolution.

Sweeney was constrained by the structural limits of the AFL-CIO. Affiliates turned to it for electoral support but were reluctant to defer to the AFL-CIO on much else. Affiliates participated in a pathbreaking member education program — Common Sense Economics — which was designed to engage with workers about capitalism and the need to organize, bargain, and participate politically, but those same affiliates who also benefited from the program were not always prepared to fully implement it.

Sweeney lacked the affiliates’ willingness to prosecute a more ambitious agenda. Steam ran out by 2005. The split in the AFL-CIO, led by Andy Stern, was unprincipled and had little to do with the issues that were raised publicly — it was rooted in certain affiliates’ desire to save money, and the frustration of others about the slowness of progress.

Yet Sweeney does deserve frank criticism. He did not challenge the basic framework of trade unionism (nor, for that matter, did Stern or other national union leaders). Traditional narrowness was challenged, but the movement failed to keep pace with the changes in the working class, global capitalism, and the rise of a virulent right-wing populist movement. What was needed was what the late Jerry Tucker, leader of a progressive reform movement in the United Auto Workers, advocated — a true reformation of organized labor.

That being said, John Sweeney was a remarkable leader, and we both owe him a great deal on the personal and career level. He had a vision for a reinvigorated trade union movement that could energize the US working class and beat back neoliberal globalization. At the same time, he seemed to expect a new accommodation with capital like the New Deal era without a transformation of organized labor and a broader progressive political movement (as opposed to a liberal one) in office.

John Sweeney will be missed and should be venerated. Yet the task of a consistent reformation of organized labor remains. The working class demands nothing less.

Fernando E. Gapasin, PhD, has been an activist in the US union and Chicanx movements for over fifty-five years and is coauthor with Bill Fletcher Jr of Solidarity Divided.]