Texas Could Have Kept the Lights On

Republicans are blaming renewable energy, when it’s the state’s powerful utilities that failed to prepare for the worst. 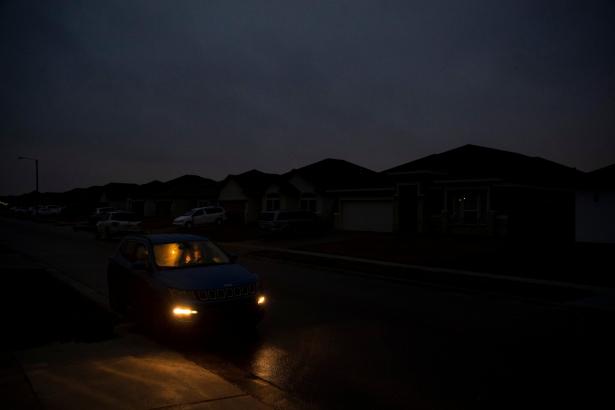 A family in Corpus Cristi, Texas, huddled in the car after the neighborhood lost power on Tuesday.Credit..., Courtney Sacco/Caller-Times, via Reuters Dionne Searcey

On Sunday in San Antonio, April Saenz, a medical worker, went to visit her mother. Because of the terrible road conditions brought on by the ongoing cold snap, she chose to stay the night. Together, they passed 36 hours in the shivering darkness. Food thawed in the freezer, and Ms. Saenz eyed her mother’s insulin in the fridge, worried it would go bad. “It was really upsetting. It was crazy,” she told me. “These were complete man-made failures.”

A cold, sharp dagger has slashed through Texas, America’s largest and proudest producer of fossil fuels, while stranding millions without heat or light. The frigid disaster has also laid bare the fallacy, still prominent in the Lone Star State, that oil and gas are more important than impending climate catastrophe, embarrassing a political class that just weeks ago pledged to defend the oil and gas industry — its own Alamo — from the Biden administration.

The fallacy is hard to unwind even as people are dying. But some Texans are also furious about how their state’s ruinous laissez-faire governance led to a cascade of human-caused disasters of epic proportions. Indeed, this was no act of God.

Last week, 29 million Texans learned that the weather would turn unseasonably cold. It would be no ordinary blue norther: As the planet warms, so does the Arctic, disrupting the jet stream, which usually keeps the polar vortex of frigid air in place there. Now there is an emerging, if not unanimous, view among climatologists that the vortex is wobbling and dipping south, paralyzing Madrid, freezing the American Midwest and blanketing the Sierra Nevada, all since the start of this year.

Yet the folks over at the Texas power grid appear to have been caught flat-footed by spiking demand in energy to keep houses warm and phones charged. In general, there’s a storage problem in Texas when it comes to natural gas. Utility companies often don’t bother to buy gas reserves: It’s easier, cheaper and more profitable to tap the gas in the field with a pipeline — usually.

But the moment to invest in resilience has passed. The spot price in early February was under $3 per million British thermal units; this week those spot prices have soared to all-time highs. After a cold snap in 2011, the power companies were supposed to better winterize their plants. Ten years later, they hadn’t done it. It’s hard to believe they couldn’t afford it: Oncor, the giant power utility serving Dallas, reported $651 million in net income in 2019.

As the cold froze Oklahoma and sent temperatures in Dallas to lows not seen in over a century, the natural gas industry proved unable to deliver more gas even if it was purchased. Wellheads in the Permian Basin froze solid. Pipelines leaked water, which, in turn, turned metal and gas into useless, immovable ice.

The crisis dates back to the 1930s, when the Federal Power Commission gained the authority to regulate interstate transmission of electric power. But politicians in Texas, with their slavish devotion to the fossil fuel industry, didn’t want Washington regulating the electricity business and chipping away at those hefty profits.

So the business went entirely unregulated until the formation of the Energy Reliability Council of Texas (ERCOT) in the 1970s. But ERCOT has been anything but reliable. While it is technically overseen by the state, its board is really just an industry club. Several of its members don’t even live in Texas.

On Saturday, Gov. Greg Abbott solemnly declared the state would not see another accident like Thursday’s deadly 100-plus-vehicle pileup on a frozen Fort Worth highway. On Monday, he reassured Texans that power would return. That day, two million people were plunged into darkness, and many into 8 degree weather. Then four million. By Tuesday, 10 people had died in the Houston and San Antonio area alone. Water pipes burst across the state, forcing people without power to boil water just to drink it safely.

After taking a beating on Twitter, Mr. Abbott spun around on Tuesday and blamed the utilities. He promised an investigation into ERCOT. George P. Bush, the state land commissioner, cravenly blamed the renewable energy industry, a talking point that caught fire among conservatives.

It was all just cowpie, though: Renewables like wind and solar can contribute up to 20 percent of the Texas power grid, but they were forecast to account for just 7 percent of the winter grid, with some 80 percent of electricity in the Lone Star State’s capacity projected to come from natural gas, coal and a bit of nuclear power. And while some wind turbines in Texas froze, many of them kept turning. By Tuesday, renewables were helping to get the power going again. But it wasn’t enough. Each time the power came back up on Tuesday, demand spiked, and the power supply ran right back down. The rolling blackouts would just keep on rolling.

On Wednesday, Mr. Abbott ordered natural gas producers not to let their supply out of the state until Sunday, and to instead send it to the electrical grid. How soon this could help the millions of Texans who continue to shiver in the darkness is unclear. ERCOT has, once again, ordered utilities to cut power.

“It feels colder than 25 degrees outside. I’m shivering in the house. … My hands are freezing. My feet are freezing, and my nose is freezing,” Laura Bettor, a psychologist in Austin, told me as she watched people ski down her street. “People’s phones are down because they can’t charge. And the government here? Everything about the state government here is stupid.”

Richard Parker is an award-winning journalist and the author of “Lone Star Nation: How Texas Will Transform America.”