"It's almost like the American people want government to meet the scale of the crisis," said New York Congressman Mondaire Jones. 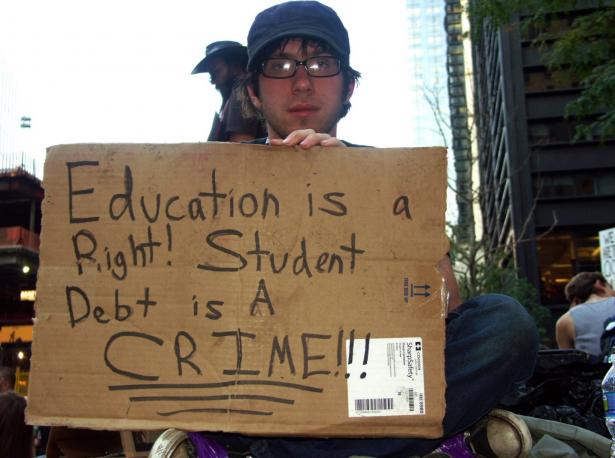 A college student voices his opinion on education and student debt in Zuccotti Park on the 23rd day of the Occupy Wall Street movement in New York City,Phineas Azcuy CC BY-SA 2.0

As President Joe Biden faces sustained criticism for dismissing calls to cancel $50,000 in federal student loan debt per borrower, new polling released Thursday reveals strong support for him to "go big" and carry out that proposal.

Data for Progress found (pdf) that 54% of likely voters think Biden should use his executive authority to cancel $50,000 in student debt compared to just 37% who said he should not forgive that debt.

"It's almost like the American people want government to meet the scale of the crisis," wrote Rep. Mondaire Jones (D-N.Y.)—a co-sponsor of legislation introduced in December calling on Biden to cancel up to $50,000 in Federal student loan debt—in a tweet responding to the poll.

As Data for Progress' Prerna Jagadeesh wrote in a blog post analyzing the findings, Biden should view student debt cancellation as "not a liability but rather an opportunity, given how popular student loan debt cancellation is with the American people."

The progressive group also queried respondents about cancelling just $10,000 in student debt per borrower. It found that 52%  backed that proposal compared to 38% who said Biden should not forgive that amount of student debt.

"As the chart shows, support was slightly higher in the $50,000 condition, though within the margin of error," wrote Jagadeesh. "There is no evidence that going smaller will help Biden."

Data for Progress' poll came the same week Biden said at a CNN town hall that he "will not" cancel $50,000 in student loan debt, telling the audience that he objected to the forgiveness of "billions of dollars of debt for people who have gone to Harvard and Yale and Penn" and said the funds should instead be directed "for early education for young children who... come from disadvantaged circumstances."

"Who cares what school someone went to?" Rep. Alexandria Ocasio-Cortez (D-N.Y.), another co-sponsor of the debt cancellation proposal, tweeted in response to Biden's comments. "Entire generations of working class kids were encouraged to go into more debt under the guise of elitism. This is wrong."

"Nowhere does it say we must trade-off early childhood education for student loan forgiveness. We can have both," she added.

Further evidence against Biden's objection to cancelling $50,000 in student came Thursday with a report from social science research group Jain Family Institute showing how the action would lessen the nation's economic inequality.

"With rising debt levels seen in all groups and states, coupled with the current pandemic-induced recession and its unemployment effects, any forgiveness policy is also an opportunity to stimulate the economy, in addition to its egalitarian effects," the report said.

"There is no evidence that going smaller will help Biden."
—Prerna Jagadeesh, Data for Progress Passage of the $50,000 debt cancellation proposal would mean "[n]early 85% of young borrowers in the poorest communities would become free of student debt."

Data for Progress' Jagadeesh also noted that "cancelling a full $50,000 of student loan debt per person via executive order won't just be a one-time handout to college educated people—it will help people who did not receive a college degree too." She continued:

Cancelling student debt will improve the economy overall and strengthen every component of President Biden's pandemic recovery package. Every month, the average American student debt holder makes loan payments of $200 to $300. Cancelling that debt would be akin to giving those people an extra stimulus check every month. That's not to mention that people drowning in student loan debt are considerably less likely to start a small business or buy a home—cancelling $50,000 of their debt will enable these people to meaningfully participate in the American economy for the first time in their lives.

Speaking with Democracy Now! Thursday, filmmaker and Debt Collective organizer Astra Taylor stressed that President Biden possesses the authority to cancel all student debt. "It was granted by Congress decades ago. And he can erase all federal student loans. And he should," she said.

Joining Taylor on the segment was Braxton Brewington, a digital strategist with the Debt Collective. He called the decision not to cancel student debt "policy assault" and said that those who "would benefit the most from student loan debt [cancellation] are individuals like me, Black and Brown borrowers, mostly Black women borrowers, who, frankly, have upwards of $35,000, $50,000, hundreds of thousands of dollars' worth of debt."

But, Brewington added, "this is an intergenerational issue," noting that seniors can get part of "their Social Security checks garnished for student loan debt, which is insane."

Taylor, in her remarks, said student debt cancellation should be framed as "an economic justice issue, it's a racial justice issue, and canceling student debt is also a democracy issue, because we all are entitled to live in a society where our fellow people can pursue education."

Common Dreams is the nonprofit news source for the 99%. Subscribe.