The much renowned poet, political insurgent and countercultural pioneer put on trial for publishing Allen Ginsberg’s Howl went on to become a beloved icon of San Francisco and a respected poet worldwide. 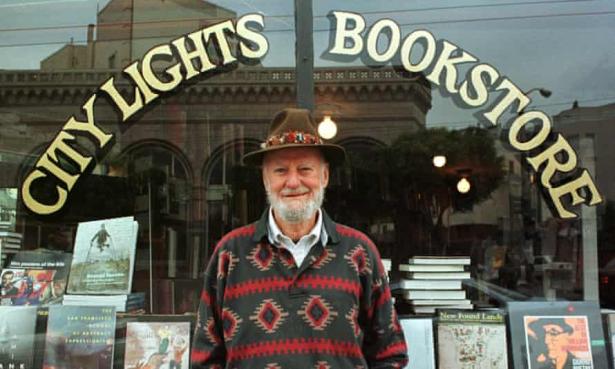 Lawrence Ferlinghetti, the poet, publisher, painter and political activist who co-founded the famous City Lights bookshop in San Francisco and became an icon of the city himself, has died aged 101.

Ferlinghetti died at home on Monday night. His son Lorenzo said that the cause was interstitial lung disease.

Ferlinghetti was born in Yonkers, New York in 1919. His father died before he was born and his mother was committed to a mental hospital, leaving him to be raised by his aunt. When he was seven, his aunt, then working as a governess for a wealthy family in Bronxville, abruptly ran off, leaving Ferlinghetti in the care of her employers. After attending university in North Carolina, he became a journalist in 1941, then joined the US navy during the second world war. While studying for his doctorate at the Sorbonne in Paris on the GI Bill, he began to write poetry.

Returning to the US in 1951, he was drawn to California as a place to start afresh. “San Francisco had a Mediterranean feeling about it,” he told the New York Times. “I felt it was a little like Dublin when Joyce was there. You could walk down Sackville Street and see everyone of any importance in one walk.”

In 1953, he co-founded the City Lights bookshop and publishing company with friend Peter Dean Martin, who left soon after, with the mission to democratise literature and make it accessible to all. “We were young and foolish,” he told the Guardian in 2019. “And we had no money.”

While most bookshops across the US closed early and on weekends at the time, City Lights stayed open seven days a week and late into the night, fostering a countercultural community that attracted the likes of Jack Kerouac and Allen Ginsberg. City Lights initially focused on selling paperbacks, which were cheaper but looked down on by the literary establishment, and publishing poetry, offbeat and radical books by the likes of Kerouac, Ginsberg, Paul Bowles, Gary Snyder and Gregory Corso.

In 1955, Ferlinghetti heard Ginsberg’s seminal poem Howl read for the first time at the Six Gallery in North Beach. The next day, he sent a telegram to Ginsberg: “I GREET YOU AT THE BEGINNING OF A GREAT CAREER. STOP. WHEN DO I GET MANUSCRIPT OF HOWL?” The epic poem was printed in Britain and shipped to San Francisco, where the copies were seized. Ferlinghetti and Ginsberg were arrested on obscenity charges in 1957.

“I wasn’t worried. I was young and foolish. I figured I’d get a lot of reading done in jail and they wouldn’t keep me in there for ever. And, anyway, it really put the book on the map,” Ferlinghetti told the Guardian. Having already sent the poem to the American Civil Liberties Union, “to see if they would defend us if we were busted”, the ACLU successfully defended the poem at a trial that lasted months. The verdict set an important precedent for reducing censorship, and heralded a new freedom for books around the world, while also making both men internationally famous.

In 1958, Ferlinghetti published his own first collection, A Coney Island of the Mind, which sold more than 1m copies. He went on to write more than 50 volumes of poetry, novels and travel journals. As a publisher, he maintained a lifelong focus on poetry and books ignored by the mainstream, even as it became harder in the face of behemoth, profit-driven presses.

In later decades, Ferlinghetti became an icon of his city. In 1978, when San Francisco was rocked by the double assassination of the city’s mayor, George Moscone and city supervisor Harvey Milk, Ferlinghetti wrote a poem that ran two days later in the San Francisco Examiner. It was titled An Elegy to Dispel Gloom, and he was personally thanked by the city for helping maintain calm. In 1994 a street was named after him, and four years later he was named San Francisco’s first poet laureate.

He remained active in City Lights until the late 2000s, chatting with fans and tourists who popped in just to meet the legend. “When he was still here every day, fixing a lightbulb or some other little thing, he never refused somebody who wanted to talk to him,” Elaine Katzenberger, the current manager of the shop, said. “He usually looked for some commonality to have a little conversation with them.”

Though mostly bed-bound and nearly blind in his later years, he remained busy, publishing his final book, Little Boy, on his 100th birthday. A loosely autobiographical novel, Ferlinghetti refused to describe it as memoir: “I object to using that description. Because a memoir denotes a very genteel type of writing.”

In 2019, San Francisco named 24 March, his birthday, Lawrence Ferlinghetti Day to mark his centennial, with celebrations lasting all month. In an interview from his bed to mark the occasion, he told the Guardian that he was still hoping for a political revolution, even though “the United States isn’t ready for a revolution … It would take a whole new generation not devoted to the glorification of the capitalist system … a generation not trapped in the me, me, me.”

When asked whether he was proud of his achievements, Ferlinghetti said: “I don’t know, that word, ‘proud’, is just too egotistic. Happy would be better. Except when you get down to try and define the word happy, then you’re really in trouble.”

[Essayist Sian Cain is the Guardian's books site editor. A collection of her cultural writing for The Guardian is available HERE.]

Through these turbulent and challenging times, millions rely on the Guardian for independent journalism that stands for truth and integrity. Readers chose to support us financially more than 1.5 million times in 2020, joining existing supporters in 180 countries.

With a new administration in the White House, America has a chance to reset. The pandemic has laid bare the country’s gaping inequalities, but new leadership has a historic opportunity to address the country’s deepest systemic challenges, and steer it toward a path of fairness, justice and stability.

It won’t be easy. Misinformation, white nationalism, and crackdowns on voting rights remain clear threats to American democracy. The need for fact-based reporting that highlights injustice and offers solutions is as great as ever. In 2021, the Guardian will also continue to confront America’s other longstanding problems – from the climate emergency to broken healthcare to rapacious corporations.

Unlike many others, we have never put up a paywall. We have chosen to keep Guardian journalism free and open for all readers, regardless of where they live or what they can afford to pay. We do this because we believe everyone deserves access to fact-based, accurate news and thoughtful analysis.

In the last year alone, we offered readers a comprehensive, international perspective on critical events – from the Black Lives Matter protests, to the US presidential election, Brexit, and the ongoing pandemic. We enhanced our reputation for urgent, powerful reporting on the climate emergency, and made the decision to reject advertising from fossil fuel companies, divest from the oil and gas industries, and set a course to achieve net zero emissions by 2030.

If there were ever a time to join us, it is now. Every contribution, however big or small, powers our journalism and helps sustain our future. Support the Guardian from as little as $1 – and it only takes a minute. Thank you.