The find supports the idea that dogs accompanied the first humans who set foot on these continents—and that both traveled there along the Pacific coast. 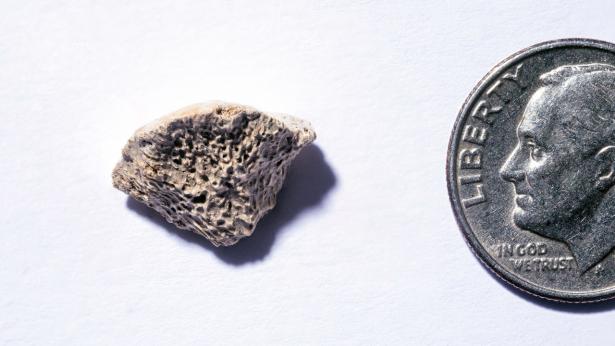 DNA analysis of this fingernail-size fragment of bone showed it once belonged to the oldest known dog in the Americas. , DOUGLAS LEVERE/UNIVERSITY AT BUFFALO

When researchers began to excavate a tunnellike cave on the west coast of Alaska in 1998, they were hoping to discover the remains of ancient bears. Instead, they unearthed something even more intriguing: a tiny chip of bone belonging to the first known dog in the Americas. The find supports the idea that dogs accompanied the first humans who set foot on these continents—and that both traveled there along the Pacific coast.

“This is a fantastic study,” says archaeologist Loren Davis of Oregon State University, Corvallis, who was not involved in the research. “If the coastal migration theory is correct, we should expect to see exactly the kind of evidence reported in this study.”

Researchers once thought humans initially entered the Americas about 12,000 years ago. That’s when thick glaciers that covered much of North America began to melt. This opened a corridor, which allowed people to trek from Siberia across now-submerged land in the Bering Sea, and then into North America on the hunt for mammoth and other big game.

But over the past decade, archaeologists have shown people might have begun to move into North America much earlier. To get around the glaciers, they would have island hopped by boat and walked along shorelines exposed by low sea levels. They traveled from Siberia through the Alaskan archipelago about 16,000 years ago, eventually making their way down the Pacific coast.

The sliver of dog bone supports this hypothesis. Recovered from among more than 50,000 prehistoric animal and human remains excavated near Wrangel Island, researchers didn’t realize it came from a dog until they analyzed its DNA. “We started out thinking this was just another bear bone,” says team leader Charlotte Lindqvist, a biologist at the University at Buffalo (UB). “When we went deeper, we found out it was from a dog.”

The bone is about 10,200 years old, making its owner the oldest dog known in the Americas, the scientists report today in the Proceedings of the Royal Society B: Biological Sciences. (The previous record holders were two 10,000-year-old dogs unearthed in the U.S. Midwest.) And the dog’s DNA holds clues to an even earlier time.

The pup’s genome revealed it was closely related to the first known dogs, which researchers think were domesticated in Siberia about 23,000 years ago. Based on the number of genetic differences between the Alaskan dog and its Siberian ancestors, the team estimates the two populations split 16,700 years ago, plus or minus a few thousand years.

That’s a clue that dogs—and their humans—left Siberia and entered the Americas thousands of years before North America’s glaciers melted. “Here we have the genetic evidence, if not the physical evidence, [showing] dogs were already in the Americas with humans 16,000 years ago,” says Durham University archaeologist Angela Perri, who was not part of the team.

The dates also line up with DNA-based estimates for when modern Native Americans split off from ancestors in Siberia, providing another line of evidence to pin down when the first migrations happened. “Understanding how the dogs moved also shows you how the humans moved,” says Flavio Augusto da Silva Coelho, a graduate student at UB who did the DNA and other analyses.

Perri agrees. The study shows dogs are a useful way to track ancient human migrations, especially when human remains are missing or can’t be sampled because of descendant community concerns, she says. Even without human samples, “dogs can tell us some really interesting things” about our history, she says.

For example, chemical isotopes in the dog bone suggest the pooch ate marine animals. Because dogs aren’t much good at fishing, their masters likely gave them scraps of fish, seal, or whale that they themselves hunted. “It’s a strong indication people are feeding dogs,” Perri says. “Everything in this study points to coastally adapted people and their dogs moving into the Americas.”

Andrew Curry is a journalist in Berlin.

Join American Association for the Advancement of Science.  Choose the membership that’s right for you.
Science depends on us.  We depend on you.  Help us advance science by becoming a member today.