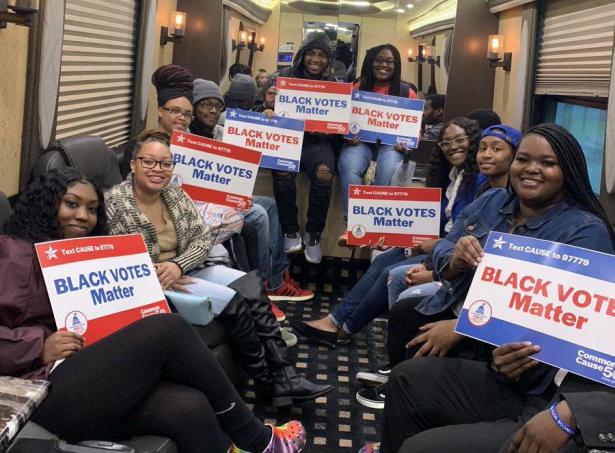 Students in North Carolina headed to the polls by bus on Super Tuesday. African Americans in Southern states showed their power as a voting bloc in the this year's Democratic primaries, but they also showed there's a big generational divide.,Democracy NC Twitter page

The fear of black power drives today’s right wing politics.  Since Barack Obama’s election, a virulent stream of racism has coursed through the Republican Party, stimulating the Birther campaign which catapulted Donald Trump to prominence. More recently, it drove the paranoia about “fraud” in Philadelphia, Atlanta, and Detroit.

There is nothing new to this antagonism. Anxiety about black voting is as old as the Republic, as are repeated attempts to exclude those voters.

During and after Reconstruction, formerly enslaved “freedmen” elected two thousand of their own to office in the former Confederacy.  After 1890, however, Jim Crow Democrats succeeded in excluding all but a handful. Not until 1965 did the Voting Rights Act finally overturn racial disfranchisement in the South, but this victory for democracy proved as temporary as Reconstruction. Since 2000, Republicans committed to the New Jim Crow have used new tools to disfranchise African Americans via voter identification laws, purges of voter rolls, closing polling places, and other underhand tactics.

Most of the above practices should be familiar to those who follow politics and history. Far less documented are the stories of free black men who voted since the Founding, although in 1857 Abraham Lincoln cited those facts to denounce the Dred Scott ruling's claim that persons of African descent had never been citizens and had no voting rights.

Before the Revolution, most colonies allowed only Protestant men to vote and hold office. Religious qualifications were voided after 1775, but the Constitution gave the states control over voting, and there was great variation. This lack of consistency gave rise to many myths, including:

Only men could vote. From 1776 to 1807, New Jersey’s constitution enfranchised all “inhabitants” meeting a property requirement, including unmarried women.

Only men with property could vote. Some states retained the English requirement of a “forty pound freehold,” but five of the original thirteen authorized taxpayer suffrage in some form, and Vermont’s 1786 constitution enfranchised “all freemen.” As universal male suffrage became common, Rhode Island kept its property qualification until 1842 (maintaining it for naturalized citizens) and Virginia retained its until 1850.

Only white men could vote. Of the original thirteen, only Virginia, South Carolina, and Georgia put a racial qualifier in their constitutions. When South Carolina tried inserting “white” into the Articles of Confederation’s definition of citizenship in 1778, it was overwhelmingly rebuffed. Certainly, after 1790 most new states legislated “white suffrage,” and some older ones moved to disfranchise. The exclusion of black voters culminated with Tennessee, North Carolina, and Pennsylvania in the 1830s. It is hardly the whole story, however.

In the 1790s and early 1800s, free black men voted and were courted by the likes of John Hancock in Massachusetts and Aaron Burr in New York. Up to the Civil War, Southern newspapers and Northern Democrats expressed their rage over black voting power by constantly attacking black people in New England cities where they held office and gained patronage, including Portland, Boston, Providence, and New Bedford.

Historians have emphasized how African Americans were disfranchised everywhere in antebellum America except Maine, New Hampshire, Vermont, and Massachusetts, without noting that they actually regained the vote in other key states.

In Ohio, an 1831 Supreme Court decision specified any man “preponderantly white” was legally Caucasian. The Black Republican John Mercer Langston (Oberlin’s elected town clerk) clarified “anybody that will take the responsibility of swearing that he is more than half-white, shall vote.  We do not care how black he is.”

In Rhode Island, “Law and Order” conservatives re-enfranchised the state’s substantial black electorate in 1842 to hold off a populist insurgency demanding universal white male suffrage. In New York, black men allied themselves to the Whig and later Republican parties led by William Seward, and worked to meet the property requirement, with as many as eleven thousand voting by the 1850s. And from 1855 to 1860, Democrats excoriated Ohio’s Salmon P. Chase as a “Negro Governor,” whose winning margin came from black votes.

The controversy over black voting culminated in 1860. On election eve, the leading Democratic newspaper, the New York Herald, proclaimed that given the Dred Scott decision, the Democrats controlling Congress should “throw out the fourteen thousand negro votes in Ohio,” depriving Lincoln of an Electoral College majority, so that Congress could pick the president.

Uncovering the true history of black voting tells us something important. Since the Revolution, we have been fighting over who is an American, and whether or not real Americans were and are white, with everyone else a guest or second-class. Forget myths of inevitable progress; that fight is hardly over, nor is its result preordained. It helps to know that at the Founding, in Lincoln’s words, “free negroes were voters, and, in proportion to their numbers, had the same part in making the Constitution that the white people had.”

Van Gosse is Professor of History and Chair of Africana Studies at Franklin and Marshall College and the author of The First Reconstruction: Black Politics in America from the Revolution to the Civil War (University of North Carolina Press, 2021).

Welcome to the History News Network (which is popularly known as HNN).

Our mission is to help put current events into historical perspective. Given how public opinion is shaped today, whipsawed emotionally on talk shows this way and that in response to the egos of the guests, the desire for ratings by the hosts and the search for profits by media companies and sponsors, historians are especially needed now. They can help remind us of the superficiality of what-happens-today-is-all-that-counts journalism.

HNN depends on the generosity of its community of readers. If you enjoy HNN and value our work to put the news in historical perspective, please consider making a donation today!