One of the country’s leading progressive political strategists and visionaries, Cobble never stopped believing that ‘a better world is possible.’ 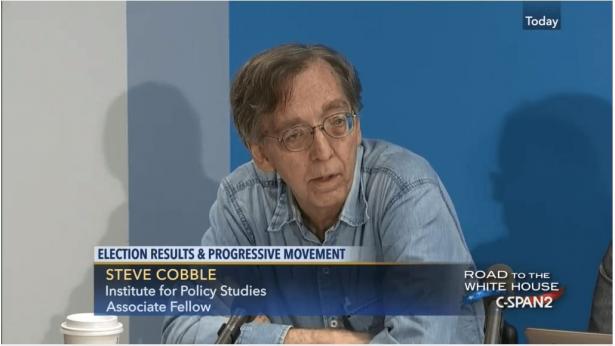 In the 1980s, Bob Borosage, then the director of the Institute for Policy Studies, brought into our fold a young activist he’d gotten to know through their work with Rev. Jesse Jackson’s Rainbow Coalition. Steve Cobble would go on to become one of the country’s leading progressive political strategists and visionaries. And we are proud to say he remained a member of the IPS family for the rest of his life, including as an Associate Fellow for the past two decades.

Steve died way too early on February 26, 2021 at his home in his newly adopted state of Texas.

We often kidded Steve by introducing him as someone who’d worked on every great failed presidential campaign since George McGovern. He was Jesse Jackson’s delegate coordinator in his historic 1988 race for Democratic Party nomination and a close Jackson advisor until his death.

He also had a savant-like understanding about ground-level politics, recalling district-by-district data in the same way some people know obscure baseball statistics (which Steve also did).

When we were confused about the state of politics, we would phone Steve and make sure we had an hour to listen and take notes. And when we convened election analysis panels or political discussions with our Board, we would often kick them off with Steve because we knew he would have synthesized the results more profoundly and more quickly than anyone else. We all got smarter in his presence. 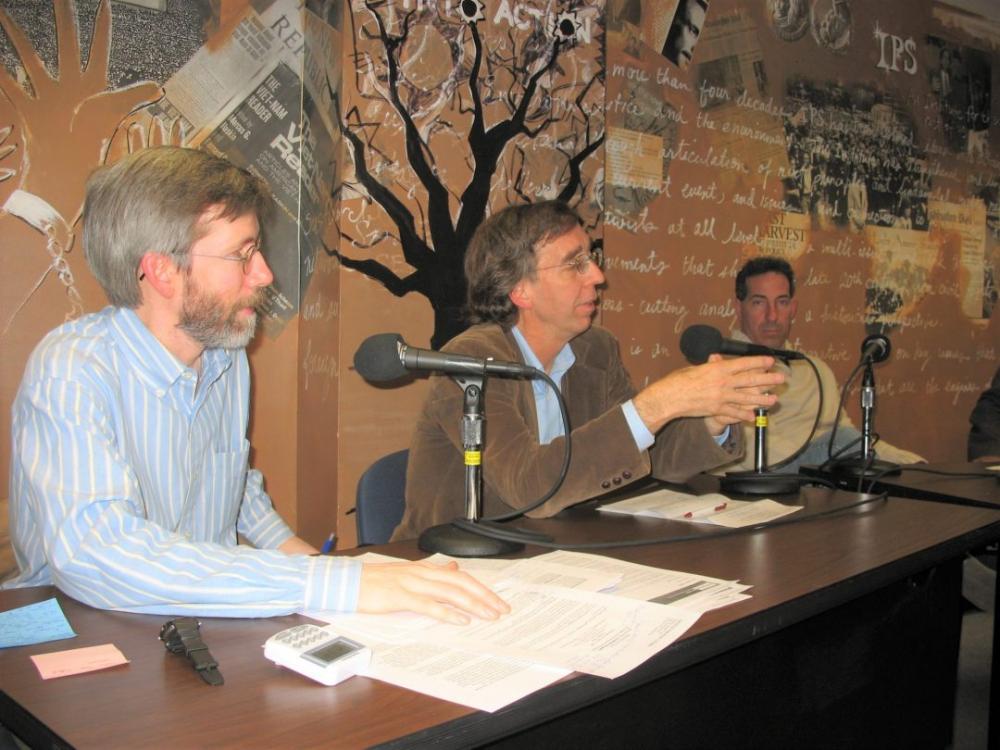 Rep. Jamie Raskin, who joined Steve in one of those “morning after” election analysis panels in 2006 (pictured below), describes Steve as “a hardcore practitioner of grassroots electoral politics who urged progressives not just to dream big but to organize seriously and systematically in order to win. He helped me in every campaign I ever ran, and I will miss him sharply.”

Steve also shared his political advice with IPS Board member and Busboys and Poets creator Andy Shallal. “Steve spent endless hours at my dining table talking about campaigning and political strategy when I ran for mayor,” Shallal said. “I was forever grateful for his friendship and advice and I, like so many, will miss him immensely.” 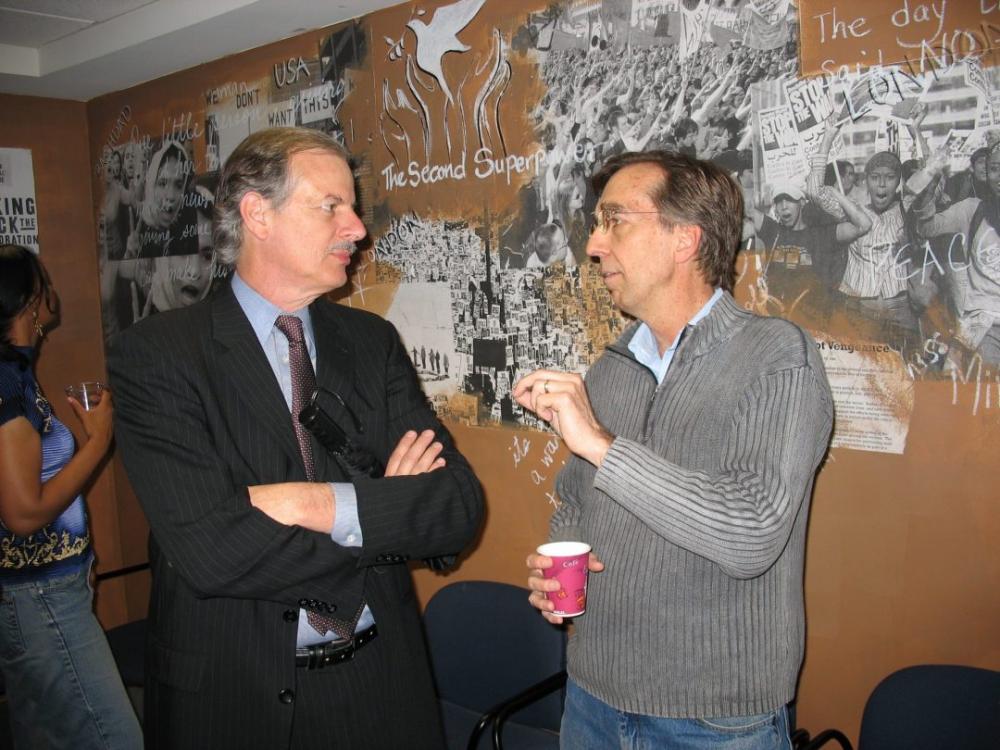 In addition to his IPS work, Steve served as political director for the National Rainbow/PUSH Coalition and as Director of the Arca Foundation (where he funded IPS’s Bring Pinochet to Justice project). He co-founded Progressive Democrats of America, the organization that started the “draft Bernie” effort, and the first national organization to endorse Sanders for President. He co-founded the web site www.afterdowningstreet.org

Steve spent the formative years of his life in the great state of New Mexico, and was incredibly proud of the IPS New Mexico Fellowship. He was a co-author of the IPS visionary 2007 report: “Just Security: An Alternative Foreign Policy Framework.” He embodied the IPS ethos of being equally at ease discussing domestic or foreign policy, and he understood how the two were interlinked.

Steve was among the most decent human beings that any of us at IPS ever met. He possessed one of the highest ratios of smarts-to-humility — so, so smart, and yet so, so humble. That combination of qualities made him a total pleasure to be with. He loved to talk about his family, his teacher wife extraordinaire Molly, his daughters Liz and Julie, and his grandchildren.

On the morning after the 2016 election of President Trump, Steve appeared on a panel in our conference room that was televised by C-Span. After a sobering analysis of the results, he ended on a positive note: “We need the energy and smarts of the millennials. We need their ideas. We need a hopeful vision. The lines are clear and the right is going to fail. They’re going to fail because their ideas don’t make any sense. A better world is possible — however far away it seems this morning.”

Steve’s family has asked that donations in his name be given to help build the endowment of the Institute for Policy Studies New Mexico Fellowship, which brings outstanding young people from New Mexico to IPS for a year of mentorship in public scholarship for social justice. Steve was a New Mexican through and through and wanted others from his home state to have the opportunity to develop their skills to make a better world. You can donate here.

John Cavanagh has been Director of the Institute for Policy Studies since 1999. He directed IPS’ Global Economy Program from 1983-1997. Cavanagh is the co-author of 12 books and numerous articles on a wide range of social and economic issues. He co-authored (with Richard J. Barnet) Global Dreams: Imperial Corporations and the New World Order, which sold over 60,000 copies with Simon & Schuster. Cavanagh co-led a 24-person team to create the International Forum on Globalization book Alternatives to Economic Globalization, which sold over 20,000 copies and was translated into 12 languages.

Cavanagh sits on the boards of the Congressional Progressive Caucus Center, the International Forum on Globalization, International Labor Rights Forum, the Fund for Constitutional Government, and the New Economy Coalition.

Cavanagh worked as an economist for the United Nations Conference on Trade and Development (1978-1981) and the World Health Organization (1981-1982). He served on the Civil Society Advisory Committee of the UN Development Program (2000-2012). He received a Bachelor degree from Dartmouth College, and a Masters from Princeton University.

Support Social Change. Thanks to supporters like you, the Institute for Policy Studies has been strengthening social movements with independent research, visionary thinking, and links to the scholars, activists, organizers, and officeholders since 1963.
Give Now to Turn Bold, Progressive Ideas to Action for People, the Planet, and Peace