tv Into the Storm: A Film-maker's Bizarre Quest to Figure Out QAnon

In a new HBO series, Cullen Hoback falls deep into a rabbit-hole while investigating the conspiracy theory-spreading cult 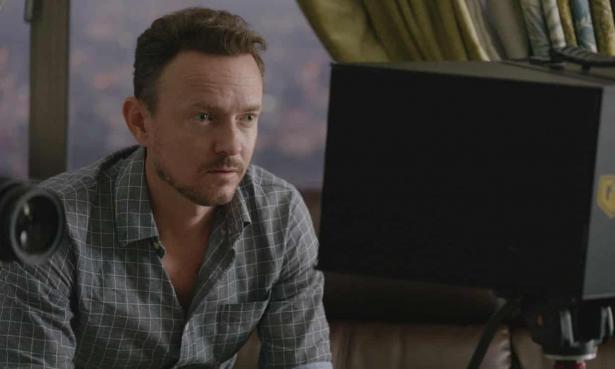 Director Cullen Hoback of Q: Into the Storm., Photograph: HBO

Anyone who spends enough time online will eventually have one of those rabbit-hole experiences, in which late-night hours slip away as one click after the other draws a person deeper into an engrossing vortex of information. Mostly, it’ll be a perfectly innocent obsession with the history of curling or the various shapes of pasta. But thousands of web-surfers have gone through this with the world of QAnon, a difficult-to-define movement combining cult-like religious fervency, the ideological action-plans of a political party, and computer games connecting the virtual dimension to reality.

For many of its adherents, their engagement won’t extend beyond the laptop they use to track the never-ending series of updates, clues and theories pertaining to their clandestine war waged against an imagined global cabal of infant-eating satanists in the highest halls of authority. For some, that battle brings them to places like the Comet Ping-Pong pizza parlor or the steps of the US Capitol for shocking displays of violence.

For documentarian Cullen Hoback, his rabbit-hole moment launched a journey that’s taken him from the States to Japan to a secluded Philippine pig farm miles outside Manila. He’s the director of the new HBO docuseries Q: Into the Storm, an effort to make sense of the massive, nasty jumble that is QAnon and the following this uniquely toxic conspiracy theory has inspired. He gets closer to the truth than anyone who’s come before, finding answers in a culture defined by deception through back-to-basics shoe-leather investigation. His dogged mission to get to the bottom of things acquainted him with elusive cyber-legends, risked his safety, and plopped him in the middle of a bizarre identity crisis for the whole internet.

“The first time I reached out to [executive producer Adam] McKay’s team, one of the things I said was, ‘My mind hasn’t melted too much from working on this,’” Hoback tells the Guardian over a Zoom call. “I’m an on-off switch, and when I’m on, I’m really on. I threw myself completely into this world. I realized quickly this couldn’t be researched online alone, and required some in-person work. ”

Like a goodly slice of the public, Hoback first became aware of QAnon when megasite Reddit banned the chat boards being used to exchange swastika art, memes about slavery and other pseudo-ironic hate material popular among residents of Planet Q. “It was another testament to how the Streisand effect works, but I became curious about what this pernicious, possibly dangerous thing was that could’ve merited a banning,” he says. “Was that a good idea, to ban them, and could it have the opposite of its desired effect? And of course, I was just curious about who Q is.”

An even briefer summing-up of the six-episode series’ brief primer on this complicated subject: “Q” is the username of the shadowy mastermind behind the whole enterprise, stoking the paranoid fires with regular “drops” of vague hints to be decoded by those “patriots” in the know. Though bigotry-fueled posting had gotten the Q community booted from Reddit, they still had a welcome home on the anything-goes free-speech-absolutist haven 4chan, which Q himself had been using as the primary channel for his cryptic announcements. Murky real-world drama compelled Q to migrate from one site to the next, from 4chan to rival site 8chan to its later rebranded form 8kun. That’s where Hoback saw his in.

He wanted to find the people behind these developments and discern their motivations, in the knowledge that the controllers of these controversial sites could bring him closer than anyone to comprehending and hopefully ensnaring the slippery fish of Q. “At first, I was trying to lay a foundation of vernacular so my audience can play investigator along the way as well,” Hoback says. “But when it came to getting in touch with the major guys, it was tricky. The only way to reach them directly was Twitter. I reached out to Fred Brennan, who was a little more public facing than everyone else. Jim and Ron Watkins were unknown quantities at the time, Ron a little more so, even though he’s the only one mentioned in Q-drops. He’s named by his username, but he himself was virtually unknown.”

The aforementioned men emerge as the key players in the cockeyed tragedy Hoback traces with his series, exposing what appears to be a sea change in the climate of the internet as the result of infighting between a small handful of weirdoes. The computer programmer Fredrick Brennan, an oddly imposing figure despite his diminutive stature and wheelchair due to brittle bone disease, created 8chan in the first place as a monument to unfettered, uncensored content-sharing. All the child abuse images and white supremacist imagery that flooded his Frankensteinian creation soon gave him second thoughts, which put him at odds with the site’s new owner, Jim Watkins, and its head admin, his son Ron. Jim, a Trumpite fountain pen collector with an increasingly creative series of facial hair designs, and Ron, a more dialed-back anime fan exercising by punching a post until his knuckles go bloody, declared war on Brennan as he made it his life’s mission to close their unchecked channel to power. 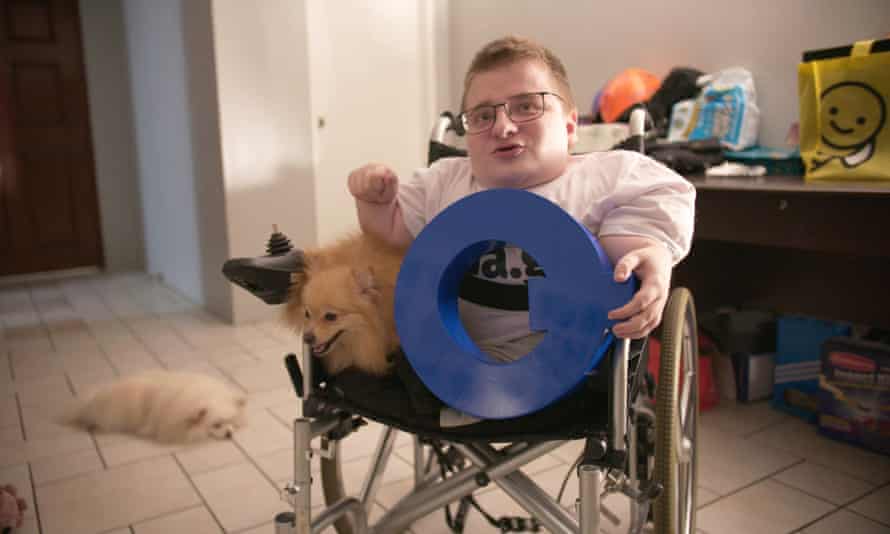 Fredrick Brennan in Q: Into the Storm. Photograph: HBO

Hoback methodically illustrates how the Watkinses, who had set out to create a friendly haven for their fellow trolls, came to be absorbed by the conspiracy they’d initially defended on principle. “Ron and Jim sort of embody the website they run,” Hoback explains. “People post and they’re not sure if they’re joking, not joking, post-ironic, if they believe the things they’re saying. In any case, they eventually come around to believing the things they’re saying. Pretend to be something long enough, and you’ll become that thing.”

Over a course of years that yielded about 1,700 hours of footage, Hoback observed this phenomenon over and over again. His aperture expands to include QAnon YouTubers (known as QTubers, of course), self-described activists, and fringe candidates like Marjorie Taylor Greene bringing their pernicious influence to Congress. Dealing with these soundbite-generating wackjobs and people monikered “TracyBeanz” and “CodeMonkey” adds a layer of darkly surreal levity to a situation already oriented around the suspicion that Hillary Clinton subsists on the blood of children. As Hoback puts it: “You chart an absurd silliness that belies something far more devious and sinister.”

These sociological ripples all originate with the machinations of Brennan and the Watkins duo, a thicket of misdirection and outright falsehoods Hoback was forced to navigate. “The only way that I was going to be able to tell this story was by setting some ground rules and taking a certain position of neutrality, with exceptions,” he says. “That was necessary, because I was bouncing back and forth between these two sides that hate each other. They also saw me as a conduit for information, or possibly disinformation sent to mess with each other, or straight-up lies to mess with my narrative. I always had to be conscious of that. If they ever asked me something I felt would be damaging to each other’s case, I told them, ‘Look, there are some things I can’t answer, and I’d say the same thing if your opposition asked me.’ That was a shield of sorts, and they respected it.” 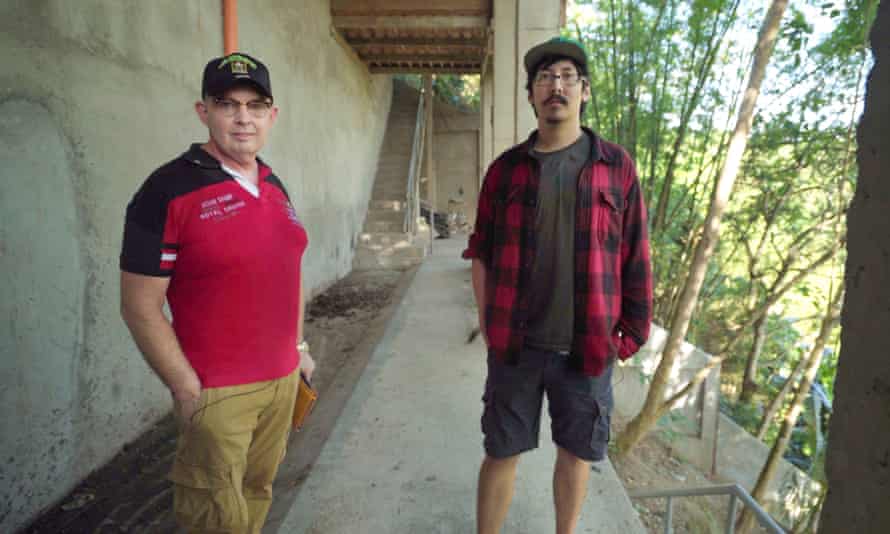 Hoback adopted a do-no-harm policy that landed him in a sticky predicament once Jim Watkins filed a cyber-libel suit against Brennan in their adopted nation of the Philippines. Duterte’s spartan justice department would lock Brennan up and his unique medical needs would almost certainly lead to his death, so Hoback hauled over to Manila to extract the young man before Philippine authorities could apprehend him. Their mad dash through the airport to get on the last plane out of the country the full pandemic shutdown last year makes up the series’ most gripping passage. “It was a terrible day,” he laughs. “I get anxious watching that whole scene. I was on a plane the day after Fred called me, 24-hour turnaround. It’s not representative of how intense things usually were, but my wife’s grandmother had just passed away from coronavirus, I had to get back, last flight let in from Hong Kong to Manila. We could’ve done a whole episode chronicling that day.”

That’s just the order of the day in the upside-down Q-niverse, which Hoback may have very well conquered; unlike so many investigative docs of this ilk, he delivers the goods, presenting a sturdy case that Ron Watkins is the keyboard chaos agent behind Q. But for all his muckraking, Hoback’s most valuable insights concern the pathologies that compel someone to take refuge among the Q-ers. In a post-Trump America, QAnon itself appears to be losing steam, with Ron instructing the remaining members of 8kun to “go back to our lives as best we are able”. But some loyalists continue the windmill-tilting, and others will bring their exploitable behaviors to the alt-right, white nationalists, neo-Nazis and other camps all too eager to integrate them. Even if QAnon disbands – and the “barrage of messages from the usual suspects” in Hoback’s inbox suggests that they’ve still got some fight in them – the US will be dealing with the attendant mentality for generations to come.

“I got a better sense of why people believe what they believe,” Hoback says. “One of the things we’ve got to face as a society is the quandary of why people are turning to QAnon. Why this radical rejection of expertise, and of ‘elites’? It gives a sense of hope, community and purpose. It fills needs for people who don’t always have much else. That’s why it gets compared to religion a lot of the time, for fulfilling a lot of the same desires. Except instead of waiting for heaven and hell, they exist right here on Earth, and they exist in the form of these bad guys … It’s a false narrative, but to them, that hardly matters. What you see in this series, is that by the end, something fantastic and ridiculous can meme itself into reality.”