Meals on screen can convey a lot about history and culture. 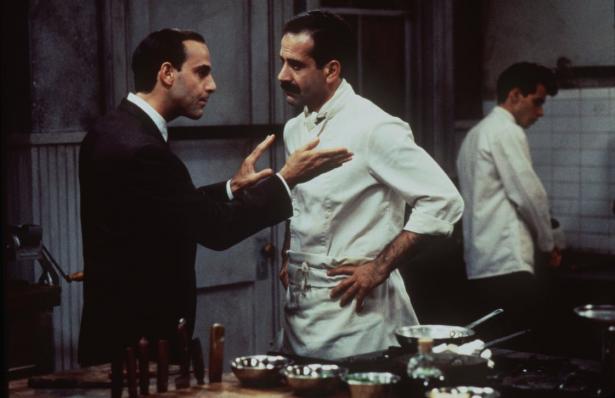 "Food is love" is something you've heard a million times if you've watched "Top Chef" or just about any series where the stars wield saucepans. But in the movies, food is not just love. It's everything.

The classic example is "Like Water for Chocolate," where an unfortunate young woman's dreams are thwarted by her family. In both the movie and the novel on which it's based, her emotions — passion, disappointment, sorrow — become ingredients in the food she cooks. The characters who eat what she whips up experience sensual pleasure, worry, even death (it's a tragedy).

Many films, including "Babette's Feast," "Tampopo" and "Eat Drink Man Woman," focus on chopping and flambéing, but movies don't have to be about food to be about food. Just like a movie protagonist who pets (or kicks) a dog, characters' responses to food are a quick way to convey information, even in a movie that doesn't have a feast at its center.

Think of the relationship between Elio in "Call Me by Your Name" and a very ripe peach, or the wholesome milk with which Cary Grant intends to poison Joan Fontaine in "Suspicion." Of how the iconic line "Leave the gun. Take the cannoli" encapsulates the importance of family even in the violent world of "The Godfather." How Jimmy Cagney weaponizes breakfast in "The Public Enemy. How Jessie Royce Landis reveals nouveau riche coarseness in "To Catch a Thief" by stubbing out her cigarette in a sunny- side-up egg. Remy the rat's dedication (and a food critic's eloquence) in "Ratatouille." How both leads figure out who they are as they master cooking techniques in "Julie & Julia."

A scene in that last movie in which Meryl Streep's Julia Child chops a mountain of onions is one of many in which Streep has proved herself the Escoffier of actors. Her character in "The Hours" casually using the cup-of-your-hand method of separating eggs neatly sums up an expert party-thrower who neglects her own life to keep others happy. Streep's food columnist character cooks throughout "Heartburn." It's crucial to who she is, so it's meaningful when she smashes a pie she made in her cheating husband's face. And the room her baker character presides over in Nancy Meyers' "It's Complicated" is so kitchen-porn perfect it's almost worth sitting through the tedious family dynamics to see it.

The way actors deal with food can also have a lot to do with whether we buy them in roles. This trope seems to have vanished, but for a few years the movies thought it was amusing to include characters who ate nonstop but somehow were still played by rail- thin actors. (To keep that bod, Julia Roberts' food critic in the otherwise awesome "My Best Friend's Wedding" would have to have done a lot of exercising that we never saw.) And who hasn't been distracted from a scene by an actor who supposedly chomps on a burger that is later shown to have a mouse-sized nibble missing?

Obviously, food reveals a lot more than "She knows how to make macarons." It can convey history and culture. In "Soul Food," a matriarch played by Irma P. Hall dishes up comfort food to remind her clan who they are. A diabetic, she can't eat much of it but tells her family, "During slavery, us Black folks didn't have a whole lot to celebrate so cooking became the way we expressed our love for one another."

Class also is delineated in "The Cook, the Thief, His Wife and Her Lover," although that food-centric film about haves and have-nots is not much fun to watch. The following are fun and, as a bonus, provide food for thought.

Long before "Stanley Tucci: Searching for Italy" became a hit for CNN, the actor was raving about pasta and, in this movie's over-the-top climax, literally planting a smooch on it. Tucci runs a failing New Jersey restaurant while his chef brother (Tony Shalhoub) fumes about "criminals" who don't understand the integrity of thoughtful cooking. In the opening bit, a customer reveals his oafishness by forcing Tucci to grate about a pound of Parmesan on his entree while his wife demands risotto with a side of spaghetti, leading Shalhoub to scream, "I need to talk to her!"

A grilled cheese sandwich is certainly not the fanciest dish, but the most profound impact a movie has had on my cooking is a scene in which Jon Favreau's chef shows his kid how to make one. I'm a butter guy (he uses mayo and oil), but slathering it on the pan not the bread, swirling the bread around the pan, letting cheese ooze out so it gets fried and pushing the cooking time until it gets crispy are all crucial elements in making cheese and bread plus fat equal deliciousness.

The movie is named after an entree, so you know it's crucial. It's a favorite dish of an Iranian musician (Mathieu Amalric) whose wife (Maria de Medeiros, from "Pulp Fiction") breaks his violin during a fight. A decades long feud ensues in this fable, which is like a sadder "Amélie," and which culminates with her making him the dish as a test of his will to live. The lesson (paraphrasing an old truism about London): If you're tired of chicken with plums, you're tired of life.

Macaroni and cheese, ham and collard greens look incredible in a movie that's centered around a Sunday family tradition. Bickering and even serious ruptures happen in between Sundays, but no matter what, the table is packed with a ridiculous amount of food in a boisterous comedy/drama where a matriarch (Hall) teaches her daughters (Vanessa L. Williams, Nia Long, Vivica Fox) that food is a way to connect to their past and future.

The pros and cons of a tight-knit clan are demonstrated best with food. Sarah Jessica Parker plays a fiancée who is not welcomed by the Stones. Feeling insecure, her worst behavior comes out in a family dinner where there's more questionable conversation than consumption. Then, to try to earn their love, she prepares a breakfast strata that ends up all over the floor before it's even seen an oven. Turns out sliding around the kitchen in spilled food, and the shared vulnerability created by the mess, can bring people together even faster than eating.

In a reverse "Like Water for Chocolate," its title character (Keri Russell) is a "pie genius" who translates her emotional ups and downs into the confections she bakes for a diner (including "I Can't Have an Affair Because It's Wrong and I Don't Want Earl to Kill Me" pie). Writer/director Adrienne Shelly's movie inspired a not-as-good musical that was a hit on Broadway and on tour.

England is usually a punchline when it comes to food. "The Trip" argues that, while its cuisine may once have sucked, it's now world-class. The improvised comedy features comics Steve Coogan and Rob Brydon as versions of themselves, traveling around rural England, competing to see who does a better Michael Caine impersonation and enjoying the heck out of the fare at country inns. The two enact a toxic relationship but they've reunited, nevertheless, for sequels in Italy, Spain and Greece.

Theater critic Chris Hewitt previously worked at the Pioneer Press in St. Paul, where he covered movies and then theater. Also, he occasionally gets to write book reviews.