Cuba's Dream: Come For A Vacation, Get A Homegrown COVID Vaccine

Cuba has a dream — to have so much COVID-19 vaccine that not only could everyone on the island get immunized but Cuba would give it away to friends and allies around the world. 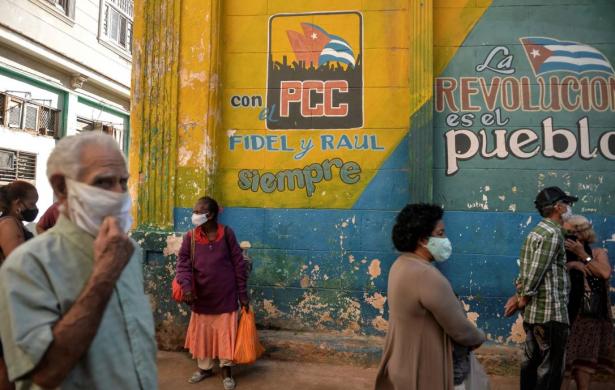 Cubans line up to buy food in Havana on March 3. The island nation is working to develop a vaccine against COVID-19. If successful, the island nation hopes to produce 1 to 2 million doses a month., Yamil Lage/AFP // NPR

There would be so many doses, Cuban officials would even offer free inoculations to tourists on arrival at the airport in Havana.

And that's not just wishful thinking. Even as the island nation faces a devastating economic crisis, with people lining up for basic food necessities, scientists are developing multiple vaccine candidates. And at least one of them looks like a winner. If successful, Cuba would be the first Latin American country to make its own vaccine — and it's not a farfetched scenario. The island has a history of vaccine development, including a lung cancer vaccine now in trials at a U.S. cancer center.

This odd situation is a reflection of how much Cuba is an outlier — one of the last Communist countries in the post-Soviet era. And it's been an outlier in the COVID pandemic as well.

For much of 2020, Cuba kept COVID numbers at incredibly low levels, some days reporting only 1 or 2 cases. The virus only took off when Cuba reopened to tourists in November. Now in need of COVID immunizations like every other country in the world, Cuba is attempting to develop and manufacture a homegrown vaccine.

Earlier this month, Dagmar Garcia Rivera, the research director at the Finlay Vaccine Institute in Havana, announced that one of Cuba's five vaccine candidates, the Soberana 2, appears to be highly effective and is entering the final stage of clinical trials.

"This is the first Cuban and Latin American vaccine to advance to phase 3 trials," Garcia declared proudly at a news conference. The phase 3 clinical trial will involve 44,000 people and is the last test of the vaccine before it's sent to Cuba's national regulatory agency, the Center for State Control of Medicines, Equipment and Medical Devices (CECMED) for approval.

A second Cuban candidate called Abdala has also entered a phase 3 study. The names of the vaccine candidates say a lot about what this effort means to Cuba. "Soberana" is Spanish for sovereign. "Abdala" is the protagonist in a dramatic poem by the hero of the Cuban revolution Jose Marti. "Mambisa," a vaccine administered as a nasal spray, is named after anti-colonialist Cuban guerillas who fought Spain in the late 1800s.

In that same revolutionary spirit Cuba isn't even attempting to buy COVID vaccines from multinational pharmaceutical companies. Nor has it bothered to sign up for the WHO-led COVAX dose sharing initiative, providing free or reduced cost vaccines to low resource countries. There hasn't been a clear explanation for this decision.

Developing a new vaccine usually takes a decade or more, but Eduardo Ojito, the head of the Cuban Center for Molecular Immunology, says the country should have enough doses of Soberana 2 to immunize the whole country by the end of summer. This is assuming the vaccine candidate sails through phase 3 trials and wins regulatory authorization.

"We are preparing to produce between one and two million doses each month," Ojito says. Despite being in the midst of a foreign currency crisis that's limited imports of vital raw materials for vaccine production, he says the country is on track to have 1 million doses available in April.

Cuba's government is already talking about distributing the vaccine in Iran, Mexico and Venezuela. Officials say they hope to produce enough of the vaccine to be able to distribute in other parts of the world, too.

The big question: Does this island nation of 11 million people have the capacity to pull this off?

"Yes," Helen Yaffe says definitively, "Cuba has the capacity." Yaffe is a Cuba specialist at the University of Glasgow. She has written about the country's pharmaceutical sector and its previous success developing its own vaccines.

Yaffe was in Cuba most recently in December and January. She says there's great excitement and pride about the potential to soon offer a domestically produced vaccine. If Soberana 2 proceeds on schedule, Cuba would have vaccine to spare before many countries have even gotten started with mass immunizations. And Yaffe says there's talk about offering immunizations on arrival at the airport in Havana.

"They have said clearly they will offer them to tourists," she says. "We don't know whether they will sell them or offer them free as part of a package holiday — sun, sea, sand and Soberana 2!"

This incredibly rapid development of a COVID vaccine in Cuba is happening in the midst of one of the worst economic crises to hit the communist nation in decades.

"In many ways this is similar to what we lived after the collapse of the Soviet Union," says Pavel Vidal, a Cuban economist. During that so-called "Special Period" in the 1990s, the island ran out of food, fertilizer and fuel.

Vidal used to work for the Central Bank of Cuba before emigrating to Colombia ten years ago. He says Cuba's often-troubled economy is right now facing serious shortages of many consumer goods including food, cleaning products and even medicines. Vidal says ordinary Cubans spend much of their day queuing in lines for basic necessities and searching for chicken meat. "So we are trying to develop sophisticated vaccines, but people don't have painkillers. That's the paradox," he says.

But he says no one should underestimate the Cuban government's ability to manage its acute fiscal crisis in the midst of a global pandemic while at the same time trying to develop an entirely new vaccine. "The Cuban government has like a Ph.D. in managing this kind of a complex crisis."

He says Cuba has the capacity and more important the political will to develop a COVID vaccine. A vaccine would not only protect Cubans, it would allow the communist nation to fully reopen its international tourism industry, which is one of its largest sources of foreign revenue, and bolster another longstanding revenue source: pharmaceutical exports.

[Jason Beaubien is NPR's Global Health and Development Correspondent on the Science Desk.

In this role, he reports on a range of issues across the world. He's covered the plight of Rohingya refugees in Bangladesh, mass cataract surgeries in Ethiopia, abortion in El Salvador, poisonous gold mines in Nigeria, drug-resistant malaria in Myanmar and tuberculosis in Tajikistan. He was part of a team of reporters at NPR that won a Peabody Award in 2015 for their extensive coverage of the West Africa Ebola outbreak. His current beat also examines development issues including why Niger has the highest birth rate in the world, can private schools serve some of the poorest kids on the planet and the links between obesity and economic growth.

Prior to becoming the Global Health and Development Correspondent in 2012, Beaubien spent four years based in Mexico City covering Mexico, Central America and the Caribbean. In that role, Beaubien filed stories on politics in Cuba, the 2010 Haitian earthquake, the FMLN victory in El Salvador, the world's richest man and Mexico's brutal drug war.]