We saw George Floyd die onscreen. We need to see this too. 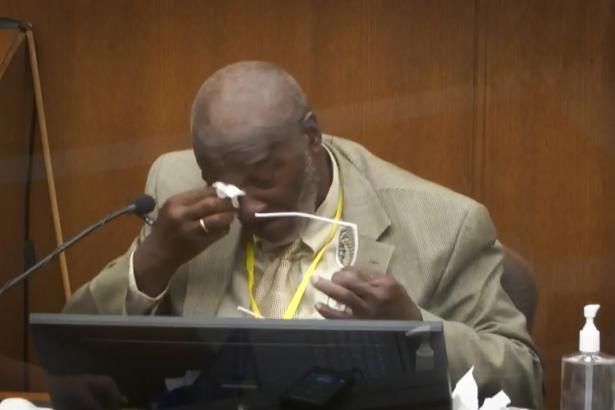 During witness testimony on March 31, bystander Charles McMillian, 61, sobbed on the stand as he listened to himself tell Floyd, “You can’t win!” , Court TV/AP

The trial of Derek Chauvin wasn’t going to be broadcast. Minnesota trials never are. It took a pandemic and a decision by Judge Peter Cahill to change that over the objections of the prosecution. Attorney General Keith Ellison’s office argued that televising the hearings live might intimidate the witnesses, making them hesitant to testify. A coalition of news outlets, the defense, and, ultimately, Cahill disagreed.

Members of the public usually have the right to observe courtroom proceedings. It’s typically also safe for a crowd to gather peacefully in a courtroom, or in an overflow room with closed-circuit TVs. But we’re not living in normal times, and this is not a normal trial.

In requesting the change to the Minnesota court system’s standard procedures, news outlets argued that “given the enormous public interest in this trial, the limitations imposed by the pandemic, and the options created by modern technology, meaningful access equates to remote access.” Essentially, they said Chauvin’s trial is not just about what happened in Minnesota. It’s about what is happening across America.

Chauvin, a former officer in the Minnesota Police Department, is charged with second-degree unintentional murder, third-degree murder, and second-degree manslaughter in the May 25, 2020, death of George Floyd.

Floyd’s death ignited months of protests and unrest across the country and around the world, and for some, it marked the first time they were moved to take to the streets. The footage that emerged was damning. It was devastating. And it evoked an emotional response in a way that news reports, no matter how hard-hitting or well-edited, sometimes can’t: Chauvin held his knee on Floyd’s neck for nine minutes and 29 seconds. We know because we saw it happen. We saw the video.

Or did we? The footage we saw showed Chauvin pinning down Floyd for eight minutes, 46 seconds. That precise span of time, established by a widely circulated video a bystander shot with their phone, has become such a symbol — of the horrors of police brutality in general and of Floyd’s death in particular — that it has its own Wikipedia page filled with examples of politicians, corporations, activists, and entire cities using the number to commemorate Floyd and raise the alarm.

Long stretches of silence are uncomfortable; they spur people into a contemplative state. And while eight minutes and 46 seconds can be a short time, it’s an eternity if you’re staring mortality and brutality in the face.

But it turns out Chauvin forcibly restrained Floyd even longer than most people thought. Prosecutors revealed the full extent of their encounter during the first week of the trial — nine minutes and 29 seconds of Chauvin’s knee on Floyd’s neck — and the revelation was shocking. Reality was worse than the footage.

It is a succinct embodiment of this moment in history that a number drawn from a video — shot on a phone, uploaded to the internet, and seen all over the world by viewers frozen in place by a virus — became such a profound symbol.

Before Cahill’s decision allowed TV cameras into the courtroom for Chauvin’s trial, the situation was already mediated to us through phone cameras and Twitter, through videos of protests and unrest, each one putting a frame around Floyd’s death and the events that followed, each one with a narrative in mind. Every video told a particular part of a story — some spotlighting the size and passion of peaceful crowds, others zooming in on property damage — and as the protests raged on, sometimes those stories conflicted.

But sometimes the stories harmonized. As other video emerged (from nearby security cameras, for instance), journalists worked to widen the frame, to fill in the picture of what happened to Floyd. New angles and voices entered the story; the meaning of the events on May 25 became clearer. We can now witness bystanders screaming, hear what they said, understand their helplessness, and see more clearly how Floyd was treated at the hands of police.

The result is that, while almost none of us were there, it may feel as though we were. That’s not new. We have seen videos of police brutality before, as far back as the beating of Rodney King in 1991. With time and technological advances, such videos have picked up force and clarity. Reading about beatings and brutality is one thing — seeing them happen is something entirely different.

Questions to ask yourself before sharing images of police brutality

Smartphones have turned citizens into reluctant documentarians. Major catastrophic or violent events are increasingly caught on camera. There’s almost always one snapping nearby, on someone’s phone or within a surveillance system, and from there it’s just one click to virality. Floyd’s death was recorded, but so are those of many others, and they have been for a long time. We’re all everywhere now, seeing everything. And what we’re seeing adds to an increased awareness of systemic racism and injustice.

So it’s a little jarring what we don’t see while watching news footage of Chauvin’s trial. In his ruling that the trial should be televised, Cahill gave strict instructions: Floyd’s family and any witnesses who are minors could not be filmed without their consent. The cameras are not permitted to zoom in on the tables where counsel is seated, meaning no one can shoot close-ups of Chauvin or either set of attorneys. No cameraperson can create meaning by capturing reaction shots during testimony, the way you would in a cinematic courtroom drama. 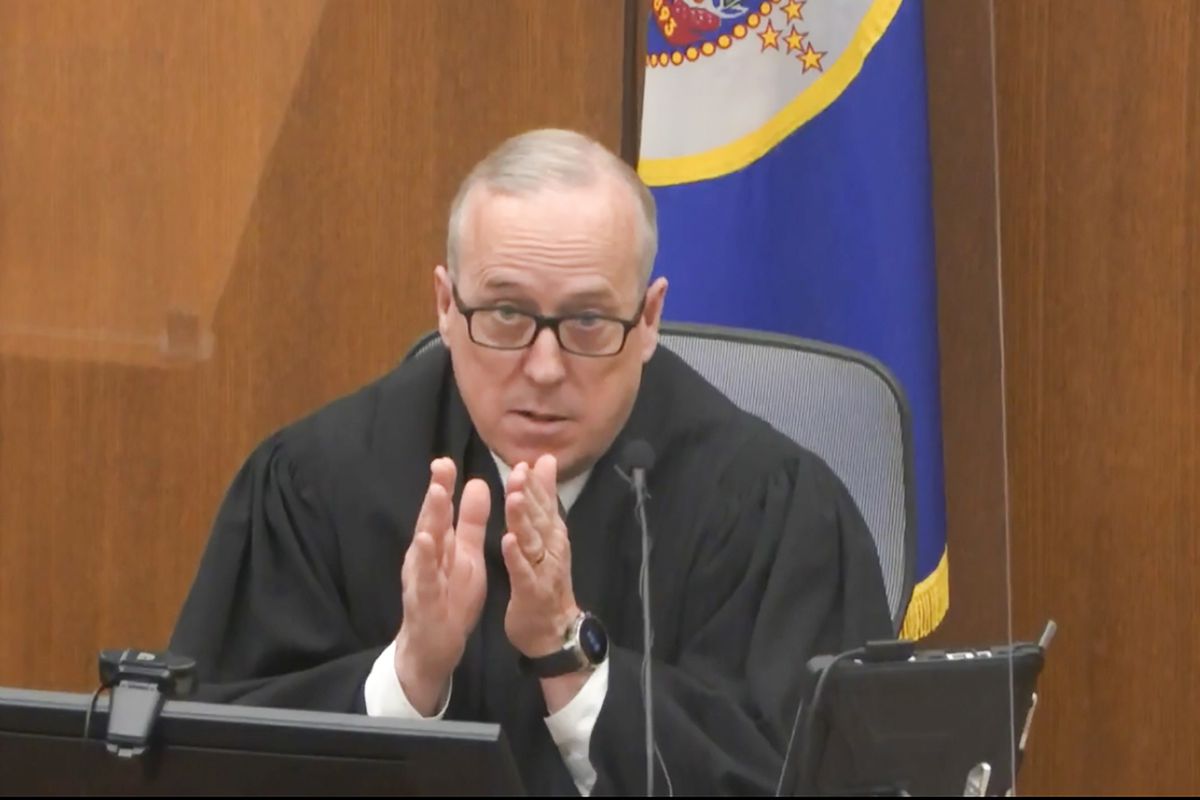 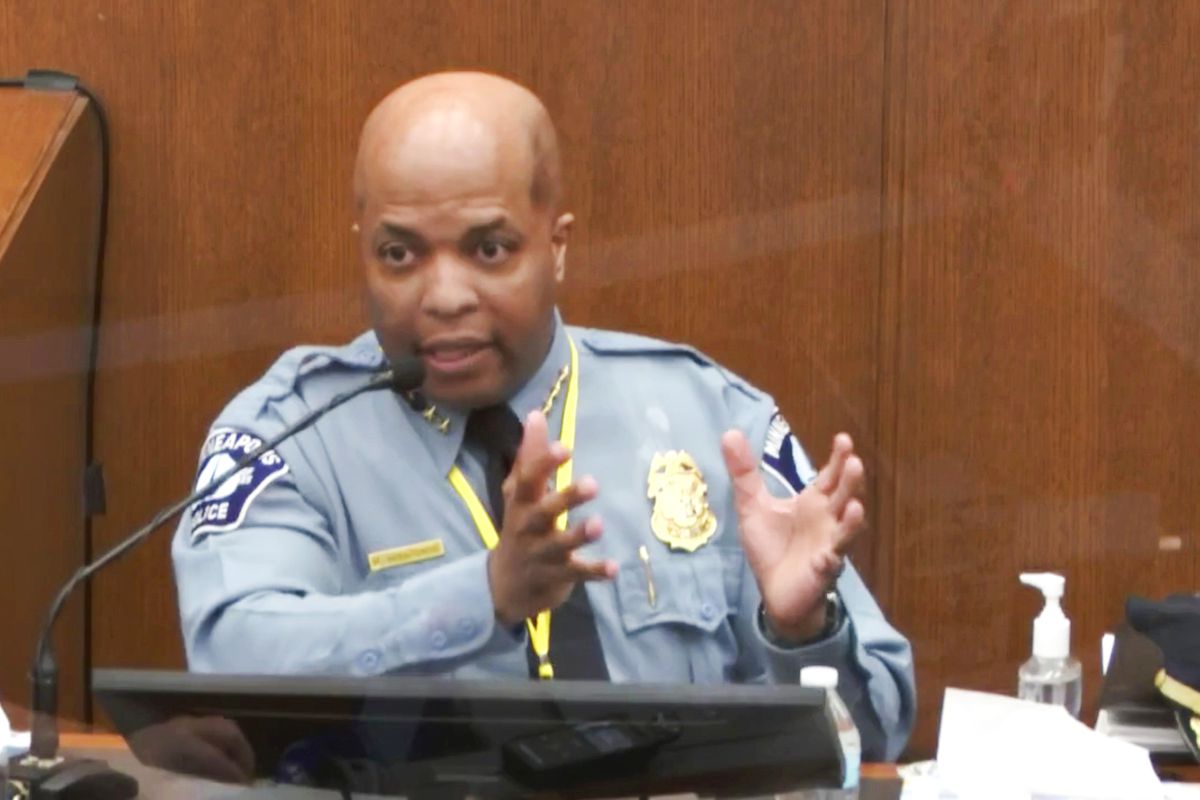 Cahill’s rules seem designed to not only protect people in the room but also to buck the genre conventions of courtroom shows and movies. This is not fiction. This is not an action movie or a drama about characters based vaguely on real-life figures. It is not a political battle, and it is not a triumphant story of a scrappy lawyer taking on the establishment. It’s actually happening. Real lives remain at stake; actual justice is in process. Few people are in the room, but we should act like we are.

There’s one more rule: Jurors must be kept off camera completely. This is so important that Cahill ordered a plexiglass partition removed during jury selection because a potential juror’s face was partially reflected in it.

In doing so, Cahill was nodding to the same sentiment the prosecutors expressed in their case against a televised trial: that broadcasting the proceedings to the whole world would not just give access to the public, it would also encourage the kind of harassment that virtually anyone whose face appears on the internet can experience. In a highly politicized and volatile case such as this one — even with the rise in support for Black Lives Matter and a distrust of police that happened in the wake of Floyd’s death — that’s a real, frightening possibility.

Having to balance those objectives — transparency in courtroom proceedings and privacy for those who participate — reflects with crystal clarity the quandary both journalists and the justice system face today. When we’ve all seen the footage and feel like we were there, how do you select an impartial jury? And when the audience isn’t limited to those in the room but expands to include everyone watching the live broadcast — when the whole world can tune in — does that affect the outcome?

High-profile trials have been televised for decades, and many have drawn considerable public interest. Chauvin’s is hardly the first to become a broadcast event. And yet it feels different. Some of that feeling is due to the inextricable link between the public interest in this case and smartphones and the internet.

And some may be due to audio of the eyewitnesses’ testimony and the footage emerging from the courtroom. There’s power to those images that isn’t captured in text. We have a new framework for listening to these eyewitnesses tell the story, one that has moved away from seeing victims as criminals receiving their just deserts and toward focusing on the injustice of the system around them. This trial proves something simple: No matter how viral a video of police brutality becomes, its power and pain are not diminished.

The sympathy and authority of the witnesses in the Chauvin trial

The most striking images in the first days of the trial came from witnesses who testified and sobbed in court, testifying to feeling guilty that they couldn’t do more to stop the police who held Floyd down. Watching video footage of the arrest and listening as Floyd cried out for his mother in his last moments of life, bystander Charles McMillian broke down in tears on the witness stand.

“I feel helpless,” McMillian told the court, explaining why he was crying. “I don’t have a mama either. I understand him.”

The jury watched the footage, and several were similarly moved. On March 31, the proceedings were halted when one member of the jury, a white woman in her 50s, stood up and left. She felt ill — or had a “stress-related reaction,” as Cahill put it — and later returned.

While it all happened (or hours or days later, on YouTube), we watched. We, the public, could watch the jury watch the videos and break down. Just as we did last summer, we have the opportunity to form opinions about what we’re seeing, based on images and framed by our TVs, phones, and laptops. The televised trial gives us another chance to participate, to fill in our mental pictures of what happened. To decide that we’re part of this story, too.

Chauvin’s trial is airing on TV, but it isn’t acting like television. It has no intentional entertainment value. This isn’t the trial of O.J. Simpson or Casey Anthony. At every turn so far, Chauvin’s time in court has reminded us as viewers of our involvement, or at least our feelings of involvement, in Floyd’s death.

More broadly, every day of the trial reinforces what some always knew and what some only started to learn last summer: There is something deeply wrong when someone dies like this, and it’s impossible to divorce emotion from logic when evaluating someone’s life. That the only reason a lot of people know about George Floyd at all — the only reason anyone’s watching Derek Chauvin’s trial in the first place — is that we’ve turned into a nation of documentarians, stitching together a narrative that’s much bigger than ourselves.

Floyd’s death represented one breaking point, evidence for some who had turned away before that something was deeply wrong. But for the American public, the weeping witnesses and gut-churning testimony should be further evidence — in a way that no newspaper article or evening news segment could capture — that the story won’t end when the trial is over.

Vox turns 7 this month. Although the world has changed a lot since our founding, we’ve held tight to our mission: to make the most important issues clear and comprehensible, and empower you to shape the world in which you live. We’re committed to keeping our unique journalism free for all who need it. Help us celebrate Vox’s 7th birthday and support our unique mission by making a $7 financial contribution today.