Organizing is sacred work. We’re dealing with the most difficult material to build with: people. If the first person you’re trying to organize rejects you, that’s okay, go to the next person. Know that there are people who want to hear and join. 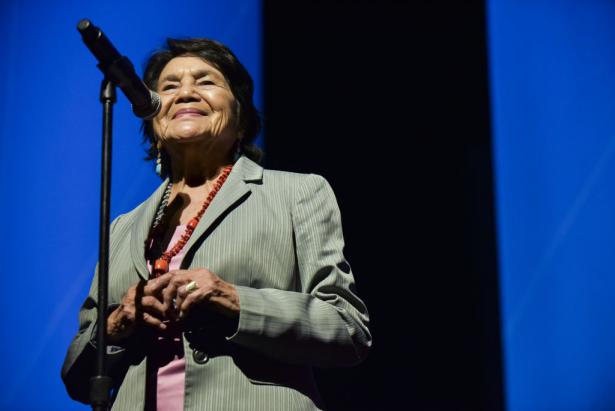 For over 60 years, Dolores Huerta’s vision and conviction have shaped workers’ rights activism in the U.S. With César Chávez and Larry Itilong, Huerta helped orchestrate and lead a coalition of Mexican American and Filipino farmworkers in the Delano grape strike from the late 1960s into the 1970s. The strike reshaped the labor movement and gave birth to the United Farm Workers in 1962, a landmark organization dedicated to elevating the voices and demands of farmworkers.

At the peak of the Delano grape strike, nearly 17 million consumers had stopped purchasing grapes. The strike forced agribusiness owners to come to the bargaining table and led to increased wages, benefits, and better working conditions for farmworkers. The boycott also led to the passage of the California Agricultural Labor Relations Act in 1975. Three decades later, Huerta’s presence on the picket line, in Sacramento, and at the bargaining table led to a series of revolutions in labor organizing and labor law.

Huerta turns 91 years old on April 10, and her birthday has been recognized as Dolores Huerta Day in her home state of California since 2018. In a conversation with Prism, Huerta reflected on the importance of changing organizing strategy to meet current socio-political circumstances, as well as the challenges of figuring out where to place organizing energy—either by targeting the White House or members of Congress.

Ray Levy Uyeda: How are you doing during quarantine?

Dolores Huerta: Well, I’m still alive. Our foundation is doing a lot of work. We’re raising money to give to families who aren’t able to get resources, like a lot of undocumented families. We’re also canvassing with face shields and face masks and going door to door to give people information about what resources are available to them and passing out masks. Lastly, we’ve been working in four different California counties to distribute food.

Uyeda: When you started organizing with the Community Services Organization in the mid-1950s, what movements and which movement leaders did you draw inspiration from?

Huerta: We were all aware of the conditions around us, like the racism against our people and our communities, so we kind of thought that this is the way it is and there’s nothing you can do to change it. Back in the ‘50s the larger movements hadn’t really started. This was about the time of the Montgomery bus boycotts, but because of the way information traveled, a lot of the work in the South didn’t get media play until later. It wasn’t until I learned in the Community Service Organization that you could organize, take direct action, and pass laws. The person that inspired me was an Anglo, Fred Ross Jr., and he’s the one who taught myself, César Chávez, and many others how to organize.

Uyeda: In what ways has there been growth in civil rights efforts? What has become more difficult?

Huerta: I think in some respects it’s easier because social media can inform, educate, and mobilize people. We saw how incredible that mobilization was during the women’s marches after Trump was elected, to the Black Lives Matter movement protests, to the Parkland, Florida, students marching to end gun violence. There were international Black Lives Matter and Women’s March protests as well, so social media mobilized people quickly.

Despite this, we should be cognizant of the fact that there are a lot of people who aren’t informed who have racist, discriminatory, and reactionary views that manifested [themselves]—for instance, in the Jan. 6 Capitol attack. So a lot of deep organizing still has to be done in terms of reaching out to those folks who are really misinformed so that we can get people to see what’s wrong with racism and discrimination.

It’s not enough to say you’re not racist—you have to be anti-racist. One thing that’s different from the civil rights movement to what’s going on today is that people have to reveal themselves. Now people have to take a position: racist or not racist, sexist or not sexist, homophobic or not homophobic, whether they believe in science or they don’t. Rev. Al Sharpton said something like, “They took off their hoods and they put on their suits.” We’ve got to identify those folks and make sure that they have no place in any kind of public office.

Uyeda: Many people hoped that the election of President Joe Biden would lead to a wave of progressive policies, but the Biden administration isn’t following through with some of their campaign promises. What are some organizing challenges around holding a neoliberal president like Biden accountable?

Huerta: Well, it’s not just Biden; he is really hamstrung by the Senate. In order for him to get what he wants to get done, he’s got to have congressional support because he can’t do it by himself. He can only do so much with executive orders and executive actions, but some of these things have to be turned into law. Right now the Senate is considering the For The People Act, which would reinstate voting protections, limit campaign contributions, and institute more robust public camping financing so people don’t have to be millionaires in order to run for office. However, none of this is going to happen unless the Senate works with the White House. Immigration reform, the Equal Rights Amendment, and other important legislation will only get passed if there’s a huge effort by people like ourselves to put pressure on the senators to vote for these measures.

Uyeda: United Farm Workers organized to ban certain applications of pesticides in the fields, but in 2021 we’re still seeing an increasing rate of agribusiness chemical development and consolidation. Do you think it’s possible to be ahead of the curve and ahead of those business adaptations as protesters? Is there a way to organize preemptively and not reactively?

Huerta: I think that’s a really great question and I think that’s something that we’re not really exploring enough. I think that in holding corporations accountable and thinking about, for example, the efforts in Georgia to unionize Amazon workers, we have to remember that in right-to-work states this kind of organizing is really hard.

We learned in the Farm Workers Union that the only way we were able to get the grape growers to come to the table and give workers in the fields things like cold drinking water and the right to organize was by boycotting their products. Now there are a lot of laws that prohibit boycotts. Instead, we have to implement informational campaigns. So if you can’t say “boycott Amazon,” you could say, “Hey, did you know how Amazon is treating its workers?”

There’s also an old saying that this question makes me think about. These two people by the side of a river see a child floating down, drowning, and they run to help. But then there’s another child coming down, and another. One person who was helping starts running upstream, and the others ask, “Hey, where are you going? Can’t you see that you’ve got to rescue the children?” And the one who was running responds, “I’m gonna go see who’s throwing them in the water.” It’s the same with organizing: Let’s go to the source of Trumpism, racism, and climate denialism.

Uyeda: Do you have a message that you’d like to communicate to young organizers who are just starting this work?

Huerta: I want to thank them. I believe that organizing is a profession and it’s very sacred work. We’re dealing with the most difficult material to build with, and that is people. You have to have a lot of patience and never give up. If the first person you’re trying to organize rejects you, that’s okay, go to the next person. Sometimes people are not ready to hear your message yet. Know that there are people out there who do want to hear the message and be invited to join the movement.

Ray Levy-Uyeda is a Bay Area-based freelance writer who covers justice and activism. Find her on Twitter @raylevyuyeda.