On Tax Day, there’s more than one elephant in the room, and they’re all in mansions. 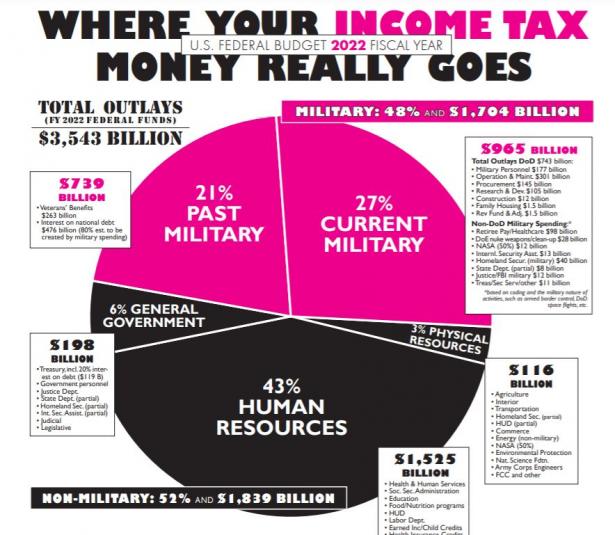 Elephants occupy the bulging mansions of 657 American billionaires, 43 of them new this past pandemic year.  Their combined wealth soared to $4.2 trillion – up $1.3 trillion – between March 21, 2020 and February 6, 2021. Nor do these billionaires pay taxes on the new wealth unless they sell these assets at a profit.  During this same period, more than 78 million working people lost their jobs.

Someone has spotted these elephants in their mansions: Senator Elizabeth Warren and colleagues in the House have proposed the Ultra-Millionaire Tax Act.  Millionaires would pay 2 cents on every dollar of wealth above $50 million and billionaires, 3 cents on every dollar of wealth above a $1billion.  Would they even feel it?  Couldn’t these mega-rich afford more like a nickel and 10 cents tax on a dollar respectively, given that most of the 2017 Trump-Republican tax cuts accrue to them?

But the biggest tax day elephant in the room resides in the 5-sided military mansion, the Pentagon, with its criminally large budget – nearly a trillion dollars each year siphoned from our tax dollars.  Why criminal?  Consider these five facts:

Wars unwon, trillions spent, and millions of innocent dead: Since the early 1950s Korean War, the US has waged both short, quick and long, large unwinnable wars against non-Western and darker skinned people and overturned governments “not in out national interest” (translate “we don’t like them”): from Iran, Vietnam, Granada, Libya and Panama, to Afghanistan and Iraq.  Even the majority of recent US war veterans do not support the wars they fought in.

In a 2013 lecture at Lafayette College, former US president and Korean War veteran, Jimmy Carter spoke bluntly about American militarism: “Almost constantly since World War II, our country has been at war.” He added that he could not think of any place on earth today where the United States is working to promote peace – nor could the then Secretary of State John Kerry when Carter queried him.

Arming the world:  The US supplied 37% of major weapons to 96 countries in 2020, thereby feeding war and starving people.  Saudi Arabia received ¼ of our arms, creating the world’s worst humanitarian crisis in waging its war and blockade on Yemen, with our tax dollar weapons. What God blesses America for starving, maiming and killing the children of Yemen?

Our wars have also poisoned countries with Agent Orange and depleted uranium as well as our own soldiers who were also exposed to open-air toxic burn pits on bases throughout the Middle East.

Ruse of “national security”:  our politicians never consult the public about what makes us feel secure in order to give us a voice defining national security.  Were we polled, I would wager that a quick recovery from the pandemic; secure jobs with a living wage; quality education for children; safe roads and bridges; affordable housing, and investing in renewables to protect from climate crises would rank up there, above threats from China, as our national security.

But inside the Pentagon mansion the reverse priorities rule.   The Department of Defense and their weapons contractors want to increase defense spending annually by 3-5% to ready for war with China, which is now seen as our #1 national security threat for its economic and military power.   And the Senate and Congress, with the exception of 50 House Democrats, buy into this Beltway obsession with national security through military superiority, even though we don’t win wars and our veterans have a higher rate of suicide than the rest of the population.

“Congress awarded $130 billion more than requested to defense contractors for the nuclear-armed Columbia class submarine program” while they “whittled down the second round of stimulus payments to Americans to $600…” reports Trystan Guyette of Beyond the Bomb.  Since the inception of the pandemic, the Washington consensus assured that major weapons makers, such as Lockheed Martin and Raytheon, would receive larger payments in advance of work.

The chief pandemic profiteer Lockheed Martin received an estimated $450 million to keep its supply chain for weapons funded.  So generous was the advance funding that the company advertised thousands of new jobs during the pandemic.  Major weapons contractors Raytheon and Northrop Grumman reported being satisfied in meeting their customers’ needs throughout the pandemic.

Will Roper, who led acquisitions for the US Air Force, bragged, “I really felt like Covid was just as much about sending a signal to adversaries that no domestic crisis can disrupt military readiness.”  Financial Analyst Jim McAleese recently described the major weapons of contractors as “swimming in excess cash” thanks to a mix of government efforts – this largesse, while 24 million Americans are hungry, one-half of them children.

Let’s take a look at what our tax money went to this past year.

57 cents of each dollar we paid in our discretionary taxes went to support the military, our wars, weapons, and bases, including 800 military bases abroad and military operations in an estimated 150 countries.

No wonder military readiness stayed intact during year 1 of Covid while most other sectors of national life suffered.

President Eisenhower captured this tradeoff in privileging weapons over people in his 1953 speech to the American Society of Newspaper Editors:

…Every gun that is made, every warship launched, every rocket fired signifies, in the final sense, a theft from those who hunger and are not fed, those who are cold and are not clothed. This world in arms is not spending money alone. It is spending the sweat of its laborers, the genius of its scientists, the hopes of its children…This is not a way of life at all, in any true sense…it is humanity hanging from a cross of iron.

This timeless wisdom from a man seasoned by World War II was proffered as the Cold War with the Soviet Union was building ominously in the early 1950s.  Has our government learned nothing in the ensuing 70 years as it continues to use the lion share of our tax dollars to ensure global military supremacy while neglecting our security and well being at home?

I wonder: has this fanatic quest for weapons-based dominance globally come home to afflict us with the January 6 armed insurrectionists’ attack on Congress, many dressed in old and new military garb?  Has the War on Terror come home to roost when the major terrorist threats to the US are largely angry, armed white men from within, as even the Pentagon acknowledges.

Is this our cross of iron?

We know where national priorities lie when the military weapons’ contractors were thrown a lifeline and every other sector was doled band aids through whittled down temporary relief acts.  This will only shift if the child social security becomes permanent, a living wage of $15 or more is mandated, we invest in an inspired, committed public sector, and we skill up to use and prize diplomacy in contexts of potential conflict.

[Pat Hynes, a retired Professor of Environmental Health, directs the Traprock Center for Peace and Justice in western Massachusetts.]