"With sufficient political will and swift action, your administration can finish the job." 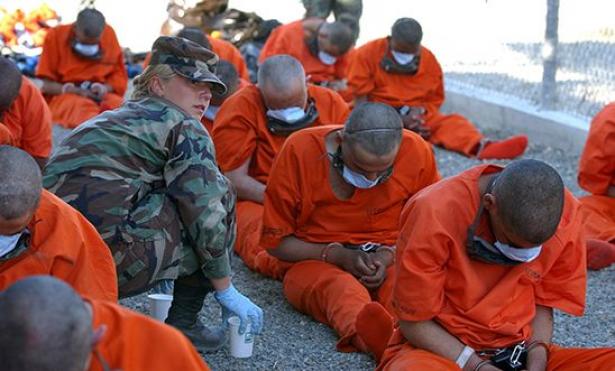 Detainees on arrival to Camp X-Ray, the holding facility at Guantánamo Bay, Cuba., US DoD

Echoing recent demands from human rights advocates and former detainees, two dozens members of the U.S. Senate Democratic Caucus on Friday pressed President Joe Biden to finally close the Guantánamo Bay offshore military prison, where 40 men are still being held despite global outrage over the facility and its long record of torture.

"As a symbol of lawlessness and human rights abuses, the detention facility continues to harm U.S. national security by serving as a propaganda tool for America's enemies and continues to hinder counterterrorism efforts and cooperation with allies," declares the letter (pdf), spearheaded by Senate Majority Whip and Judiciary Committee Chair Dick Durbin (D-Ill.) as well as Appropriations Committee Chair Patrick Leahy (D-Vt.).

"For nearly two decades, the offshore prison has damaged America's reputation, fueled anti-Muslim bigotry, and weakened the United States' ability to counter terrorism and fight for human rights and the rule of law around the world," the letter continues. "In addition to the $540 million in wasted taxpayer dollars each year to maintain and operate the facility, the prison also comes at the price of justice for the victims of 9/11 and their families, who are still waiting for trials to begin."

"After years of indefinite detention without charge or trial; a history of torture and cruel, inhuman, and degrading treatment; and multiple attempts at a thoroughly failed and discredited military commission process, it is past time to close Guantánamo's detention facility and end indefinite detention."
—24 senators

In February, National Security Council spokesperson Emily Horne said that "we are undertaking an NSC process to assess the current state of play that the Biden administration has inherited from the previous administration, in line with our broader goal of closing Guantánamo."

White House Press Secretary Jen Psaki subsequently confirmed that shuttering the prison permanently "certainly is our goal and our intention."

Welcoming the White House's review, the senators point out that all 40 Gitmo detainees are aging, many with complex health problems, and six have been approved for transfer for years, in some cases for over a decade.

"After years of indefinite detention without charge or trial; a history of torture and cruel, inhuman, and degrading treatment; and multiple attempts at a thoroughly failed and discredited military commission process, it is past time to close Guantánamo's detention facility and end indefinite detention," the lawmakers emphasize, adding that "with sufficient political will and swift action, your administration can finish the job."

"Strong and effective leadership from the White House will be necessary," the senators write, calling for a senior official specifically tasked with handling the closure.

The lawmakers add that "because indefinite detention at Guantánamo is at its core a human rights problem—one that demands solutions rooted in diplomacy and that uphold U.S. human rights and humanitarian law obligations—the National Security Council's human rights directorate should play a leading role in both the review you have ordered as well as throughout the closure process."

They further demand that the president immediately re-establish the special envoy for Guantánamo closure at the State Department, rebuild related infrastructure at the Defense Department, and, as it relates to the remaining detainees, "make use of our federal court system in ways that are consistent with current law but that have been underutilized by previous administrations."

"Given the current statutory prohibition on transfers to the United States," the letter says, "we urge you to direct the Justice Department to explore pursuing plea agreements remotely, via video conference, with detainees for whom there are federal charges available and against whom the department has sufficient untainted evidence to bring such charges."

"After the unprecedented damage of the last four years to America's standing in the world, closing the Guantánamo detention facility is more important than ever for sending a message about what we stand for as a nation."
—24 senators

"In the event that a detainee is sentenced to a period of incarceration beyond time already served at Guantánamo," the letter continues, "your administration could negotiate with foreign governments to allow the remaining time to be completed in the transfer country subject to the terms of the plea agreement."

The senators also call on Biden to "reverse erroneous and troubling legal positions taken by the Trump administration regarding the application of relevant international and domestic legal protections to Guantánamo, including in particular the position that the Constitution's Due Process Clause does not apply to the men detained there."

"After the unprecedented damage of the last four years to America's standing in the world, closing the Guantánamo detention facility is more important than ever for sending a message about what we stand for as a nation," the letter concluded. "We urge you to act swiftly to ensure that message is loud and clear."

This work by Common Dreams is licensed under a Creative Commons Attribution-Share Alike 3.0 License. Feel free to republish and share widely. Common Dreams is a non-profit independent newscenter created in 1997 as a new media model. By relying on our readers and tens of thousands of small donations to keep us moving forward—with no advertising, corporate underwriting or government funding—Common Dreams maintains an editorial independence our readers can count on.