AOC and Ed Markey Want a Civilian Climate Corps. Here's What It Could Look Like. 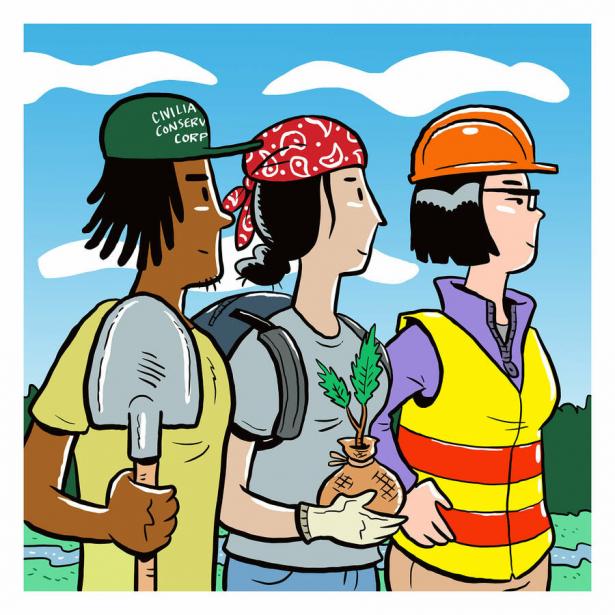 1. A new, national program to put Americans to work on environmental projects that slow climate change and mitigate its effects.

What’s the ETA on a Civilian Climate Corps?

On Tuesday, Rep. Alexandria Ocasio-Cortez (D‑N.Y.) and Sen. Ed Markey (D‑Mass.) introduced the Civilian Climate Corps for Jobs and Justice Act of 2021 at a news conference reintroducing the Green New Deal. The Corps will compensate at least $15 per hour for its 1.5 million workers, provide full healthcare coverage, support transportation, housing, and childcare for workers, and offer educational grants of $25,000 per year of service. It also includes ​“explicit antiracist language” to ensure ​“environmental justice communities” benefit from of at least 50% of the projects. The bill also requires coordination with local labor unions.

Rep. Ocasio-Cortez emphasized the importance of putting marginalized communities first in all efforts to transition to a clean energy economy. ​“Those who have been left behind come first,” she stated at the conference. ​“We are going to transition to a 100% carbon-free economy that is more unionized, more just, more dignified, that guarantees more healthcare and housing, than we ever have before.”

There are plenty of ideas for what these workers could do: ​“Conserve and restore public lands and waters, bolster community resilience, increase reforestation, increase carbon sequestration in the agricultural sector, protect biodiversity, improve access to recreation, and address the changing climate.”

The bigger question is how to make it happen.

Ideally, no. AmeriCorps and other service programs geared toward young people provide readily available (and cheap) models. They dole out grant funding to nonprofits for them to pay a stipend near the poverty line to their workforce. These participants, often college graduates, work short-term in communities that are impoverished by the same system that sends aid by way of AmeriCorps. We need something that offers good wages and a long-term commitment for projects with substantial local support and input.

An alternative model is the one alluded to in the name: the Civilian Conservation Corps (CCC), established by FDR in 1933, which employed around 3 million men in its nine years. Roosevelt’s famous ​“Tree Army” planted 3 billion trees in that time as part of the program. The CCC paid $30 a month, which translates to $611 a month today, and included healthcare and dental care. The new Civilian Climate Corps could improve upon this model.

Other states have nonprofit or AmeriCorps models of the conservation corps.

How do we avoid the mistakes of New Deal-era programs?

While Roosevelt’s CCC enjoyed broad popularity, it had problems. Work camps were segregated and women were excluded entirely. Eleanor Roosevelt’s ​“She-She-She” camps, the equivalent program for women, were short-lived. Most of the projects ultimately benefited predominantly white, rural areas.

The new Civilian Climate Corps must center Black, Brown, Asian, and Indigenous communities, which have been disproportionately affected by environmental injustice (and Covid-19). That means ensuring the jobs themselves are well-paying and open to everyone. It also means the projects must address issues like Indigenous land sovereignty and remediation in fence-line communities.

According to recent polling from Data for Progress and The Justice Collaborative Institute, 79% of likely voters support the creation of a Civilian Climate Corps. If done right, it could be a game-changer

This is part of ​“The Big Idea,” a monthly series offering brief introductions to progressive theories, policies, tools and strategies that can help us envision a world beyond capitalism. For recent In These Times coverage of climate policy, see, ​“Look at How Much Sense It Makes to Do the Green New Deal Right Now, ​“The Climate Movement’s Reckoning with Black Lives Matter,” and ​“CO2 Now at Levels Unseen in 3.6 Million Years.”