The Green New Deal is all about a jobs and justice approach to climate policies, so I think that the new climate corps proposal really encapsulates that. One of the most popular programs from the New Deal is making a comeback, nearly 90 years later.

One of the most popular programs from the New Deal is making a comeback, nearly 90 years later.

President Joe Biden recently signed an executive order to create a Civilian Climate Corps. The initiative, he wrote, will provide “good jobs” for young people and train them for environmentally friendly careers, putting them to work restoring public lands and waters, planting trees, improving access to parks, and of course, tackling climate change.

[Everything you need to know about Biden’s climate policy spree]

Climate advocates celebrated Biden’s move. Naomi Klein, the activist and author of This Changes Everything, said Biden’s announcement was a “hard won victory.” Representative Alexandria Ocasio-Cortez of New York had reportedly sold Secretary of State John Kerry on the idea of a climate corps. The resemblance to the New Deal program — it even has the same acronym, CCC — may explain why the proposal sounds like part of a Green New Deal.

“The Green New Deal is all about a jobs and justice approach to climate policies, so I think that the new climate corps proposal really encapsulates that,” said Danielle Deiseroth, a climate analyst at Data for Progress, a progressive think tank. Not that you’ll hear Biden saying much about a Green New Deal, since commentators on Fox News have turned the slogan into a synonym for “socialist plot that’ll take away your hamburgers.”

The CCC employed 3 million men from 1933, in the depth of the Great Depression, to 1942, after the country had joined World War II. Lasting reminders of the CCC are all around us. Go into a state park or national park anywhere in the country, and you’ll likely see buildings, trails, and hiking shelters built by the program’s volunteers. 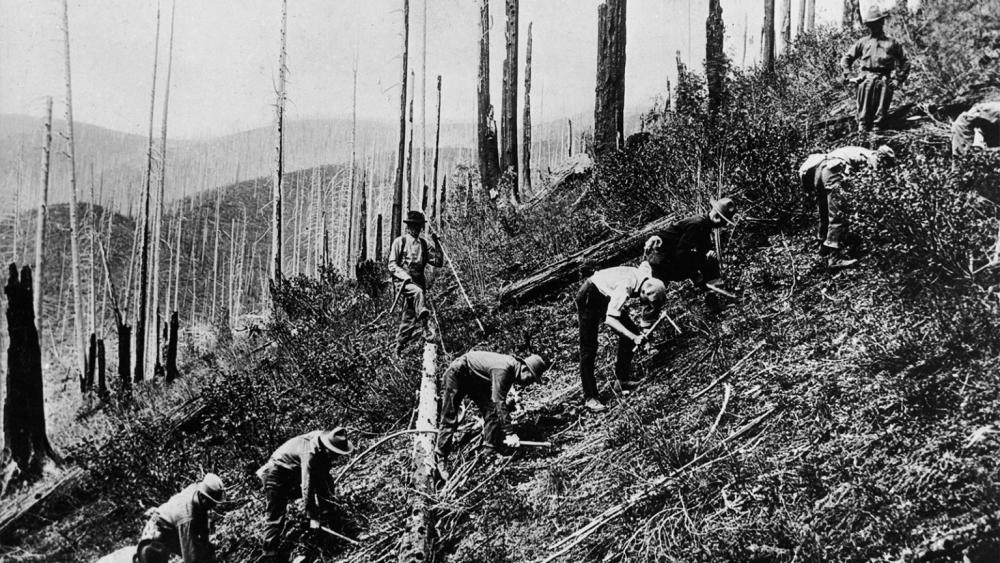 Reviving the CCC resonates right now, Deiseroth said, because the pandemic has sent the country into crisis mode with some 18 million Americans receiving unemployment benefits. The Congressional Budget Office recently said that it doesn’t expect the workforce to recover from the blow until 2024.

According to a December survey from the Yale Program on Climate Change Communication, some 85 percent of Americans support reestablishing the Civilian Conservation Corps, though that survey didn’t mention anything about the climate. A different poll from Data for Progress last May found that nearly 70 percent of the public supports the idea of a new, climate-focused corps. Even a majority of Republican voters, 62 percent, liked the idea.

But making it work could prove to be a complicated task. “The original CCC was extremely popular, but it also had some problems,” said Neil Maher, the author of Nature’s New Deal and a history professor at the New Jersey Institute of Technology. The Corps’ history provides insights — encouraging signs and cautionary lessons — for how the Biden administration could structure and promote the program.

In the worst years of the Great Depression, nearly a quarter of the country was unemployed, suicides skyrocketed, and people started hopping on freight trains — “riding the rails” — in search of work. An estimated 2 million Americans wandered the country, many of them young folks who’d felt like a burden to their cash-strapped families. Then came Roosevelt’s New Deal and a slew of new acronyms with the Civil Works Association, Social Security Administration, Works Progress Administration, and the CCC. The Corps took many young men off the streets and gave them a purpose, putting them to work in the wilderness.

Americans came to love the Corps. “Young men, when they came home for visits, would wear their CCC uniforms, and people would sort of flock around them,” Maher said. “There were stories of other young men stealing the uniforms to try to pretend that they were CCC guys.”

Enrolling was seen as so desirable that companies started incorporating images of it into their advertising. In 1935, an ad for the American Fork and Hoe Company showed a young man’s face, smothered in shaving cream, being “shaved” with an ax normally used for chopping wood (“… and it didn’t hurt a bit!”) as men in CCC uniforms waited in line behind him. The next year, the Mapleine Syrup Company put out an ad showing its “lickin’ good” product poured over a stack of steaming pancakes set in a forested camp. “Boy! That’s Swell Syrup,” a grinning CCC enrollee says.

This followed the federal government’s promotion campaign. The Corps put out films, newsreels, and countless press releases. “It was a real publicity machine,” Maher said. The CCC was one of Roosevelt’s favorite programs, and he often talked about it during his famous “fireside chats” on the evening radio. The program, he explained, was “killing two birds with one stone” by “conserving not only our natural resources, but also our human resources.”

The CCC had some critics, of course. Early on, locals in rural areas weren’t so sure about all these city boys coming in and dancing in town with their daughters, Maher said. “But as soon as the money started flowing from the camps into the local communities, a lot of that opposition evaporated very quickly.” On average, each camp spent about $5,000 per month on local goods, helping keep small businesses afloat. The men in the Corps also sent most of the money they earned back home to help their families through the Great Depression.

Much of the Corps’ success had to do with its visibility. In addition to all the ads, locals were also invited into camps for dinners, social events, and tours of the conservation projects.

“During the ’30s, the CCC was not really politicized,” Maher said. “Once it got up and running, it really became sort of untouchable when it comes to real criticism from either party.”

Of course, a government program from the 1930s isn’t going to be the perfect model for today. One big one issue with the CCC, and other New Deal programs, was discrimination. About a tenth of CCC volunteers were Black, and while camps outside the South were originally integrated, officials ended up caving to racist pressure and segregating them into separate work sites. On top of that, only men could join. Eleanor Roosevelt kept pushing her husband to allow women into the corps — and eventually, a sister organization was formed. But the “She-She-She Camps,” as they were called, were a much smaller operation.

A reenvisioned version of the CCC, Maher said, would “obviously have to be open to all people, regardless of age, gender, skin color, sexual orientation, and all that.” The Civilian Climate Corps could be about more than conserving public lands, expanding its focus to other pressing problems, like cleaning up polluted towns. In his executive order, Biden declared that the corps should “bolster community resilience” and “address the changing climate.”

Maher envisions a CCC that builds green stormwater management systems, installs solar panels on homes, helps clean up toxic waste sites, and develops urban gardens. He also hopes that locals will have some say in the Corps’ projects.

The program’s popularity could get a boost from an advertising blitz similar to what the country saw during the initial launch of the CCC in the 1930s, but adapted for modern times. “Looking ahead,” Deiseroth said, “it’d be great to use the power of social media to showcase how these projects that the Biden administration is promoting are tangibly impacting communities.” Once they get up and running, CCC camps could start showing locals what they’re up to. The program will be more visible if people see the real-life projects underway in their towns and cities — and, of course, know who’s behind them.

Biden’s initiative will likely face some criticism once the details get figured out. Some have expressed concern that problems could arise if the new CCC were modeled after AmeriCorps, as some have proposed — a program that sends people all over the country to help with disaster recovery, support build affordable housing, conserve the National Parks, and more. This could be a relatively cheap and fast way of reestablishing the CCC, but modeling it on AmeriCorps might mean low wages instead of good-paying jobs, or sporadic investments in projects dedicated to tackling climate change.

The program is also likely to get some negative press from the conservative media. “It’s very likely that talking heads on Fox News, they’re going to talk about this as, you know, ‘another part of a radical socialist Green New Deal,’” Deiseroth said.

So far, however, Biden’s approach seems to be working against such talking points, Deiseroth said. He’s been countering those narratives by talking about the tangible benefits of job creation, leaving a more sustainable world for future generations, and making sure the country has clean air and clean water for our kids and grandkids. The best way to counteract criticism, Deiseroth said, “is the way that Biden’s doing it right now.”

[Kate Yoder is the news editor at Grist, a nonprofit environmental news site in Seattle, where she covers climate change with a special focus on language and culture. Her work has been republished by The Guardian, Mother Jones, and Wired, and she has appeared on NPR's On Point, among other radio programs.]