Bernie Sanders to Rally With Charles Booker in Kentucky

"Everyone expects progressives to lose in 2022," Sanders' team said, "but if we fight early, we're going to shock them all." 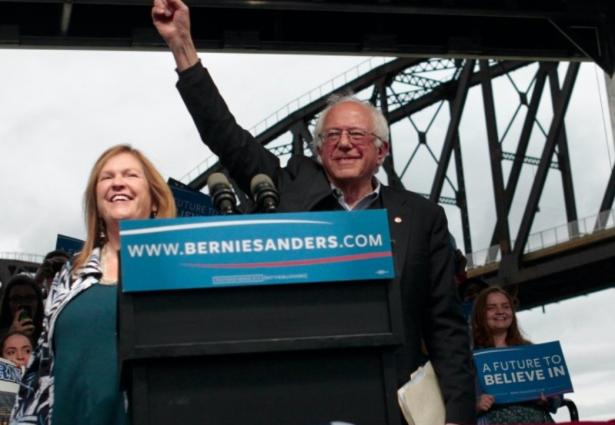 Sen. Bernie Sanders announced Friday that he will head to Kentucky on Sunday, where he and potential 2022 U.S. Senate candidate Charles Booker will contrast their pro-working families agenda with the inimical policies and obstructive actions of  the state's Republican senators—especially Minority Leader Mitch McConnell.

"Working families are right now living in more desperation than at any time since the Great Depression," Sanders (I-Vt.) said in tweet inviting followers to the rally on May 2, the day after the Kentucky Derby, at PARC Plaza on South Sixth Street in Louisville in at 2:30 pm local time.

In a press release announcing the event, Sanders said that "our country has an historic opportunity to address the long-standing crises facing the working families of Kentucky, Vermont, and the entire country." He added:

We cannot go down the path of 'trickle down economics' where the rich become much richer while working families continue to struggle. Unlike Sen. McConnell, I believe that we need to raise the minimum wage to $15 an hour, guarantee healthcare to all Americans as a human right, lower the cost of prescription drugs, provide high-quality childcare for the children of this country, make college affordable for all, and significantly reduce student debt. At a time of massive income and wealth inequality, we must also demand that large profitable corporations and the rich finally begin paying their fair share of taxes.

The Sanders team said in a message to supporters Friday afternoon that the chances of Booker winning in Kentucky are better than many people realize—but that organizing will be key. "Everyone expects progressives to lose in 2022, but if we fight early," they said, "we're going to shock them all."

Booker is a former Democratic state representative who ran for the U.S. Senate in 2020, falling less than three percentage points short of victory in his primary race against former Marine Corps fighter pilot Amy McGrath, who would in turn lose to McConnell by nearly 20 points in the November general election.

While Booker hasn't yet formally announced that he will try to oust Sen. Rand Paul (R-Ky.), who is up for reelection in 2022, earlier this month he formed an exploratory committee.

"We will transform Kentucky—and Rand Paul, you know it too," Booker says in a video announcing the move.