The thing that makes the Biden child credit so revolutionary, its universality, is also what makes it controversial. Policymakers disagree on whether all families merit direct financial assistance from the government... 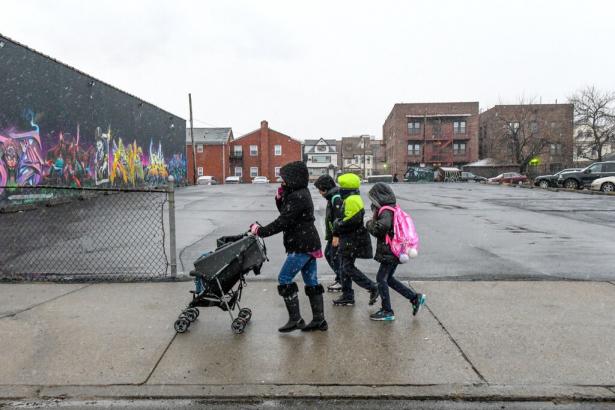 Social conservatives have become more open to government spending to support families. “The right has dropped the ball on family policy,” said Brad Wilcox, a sociologist at the University of Virginia., Credit: Desiree Rios for The New York Times

American mothers have always been sorted and divided — deemed worthy of aid or not — by race, by class, by marital status, by what their husbands do, by whether they’ve had too many children or not enough.

All these fault lines, though, will be ignored by the federal government this summer when it begins delivering a monthly check of $250 to $300 per child to all but the richest families in the United States. It will go to families whether they have one parent or two, and whether their mothers have an income or not.

The simplicity of the plan cuts through old ideas of who’s deserving, “narratives that we know are grounded in stereotypes and moral measuring sticks,” said Celeste Watkins-Hayes, a sociologist at the University of Michigan. Instead, the proposal “just makes sure parents have the resources they need to raise their families.”

Yet the thing that makes the Biden child credit so revolutionary, its universality, is also what makes it controversial. Policymakers disagree on whether all families merit direct financial assistance from the government, or whether it should be reserved for parents — including single mothers — who work for pay.

The answer, in American policies, has long depended on characteristics like their income, family structure and, especially, race, researchers said.

“What it means essentially is that when white women stay home and work without pay for the family, that’s a great thing,” said Jacqueline Jones, a historian at the University of Texas at Austin. “When Black women attempt to stay home and care for their children, if they don’t have the means or the husband to do so, they’re vilified.”

The question of work could be the largest obstacle to reimagining federal support for families. It adds to a growing tension on the right between promoting work and promoting traditional families: While some Republican policymakers, including Senator Mitt Romney of Utah, support a near-universal child credit, others, like Senators Marco Rubio and Mike Lee, believe it should have a work requirement.

A divide on the right

More Republicans have recently joined Democrats in agreeing that families with children need government support, as the problems families face have shifted. Teen parenthood has sharply declined. But the opioid crisis has ravaged rural families. Wages have stagnated for many families even when they have two working parents.

“That’s definitely created a degree of working-class consciousness on the right,” said Samuel Hammond, the director of poverty and welfare policy at the Niskanen Center. “Maybe in the ’90s, when you talked about single moms, that was disproportionately a dog whistle for Black single moms. Now, if you’re a Republican, you have plenty of single moms in your constituency.”

The pandemic has further made clear how much parents rely on outside support when raising children, and how quickly any family can fall into an economic or health crisis.

“There’s always been a lot of overlap between social and economic conservatives: Two-parent families are better off economically,” said Angela Rachidi, who studies poverty and safety net policies at the American Enterprise Institute. “But the last few years, social conservatives have become more open to using government spending in ways that make economic conservatives uncomfortable.”

She aligns with the economic conservatives, who cite evidence that work requirements can decrease child poverty and model a strong work ethic for children. She does not want government aid to encourage people to forgo work. (The previous child tax credit was not available in full to families with no or low income; the earnings threshold to start benefiting from that credit was $2,500 when the tax law passed in 2017.)

“By lessening the importance of work,” she said, “we’re harming the most vulnerable families.”

Social conservatives have become more open to government spending if it encourages more women to have children and enables them to stay home with them. They cite research that children benefit from strong attachment to their parents.

“The right has dropped the ball on family policy,” said Brad Wilcox, a sociologist at the University of Virginia, in a recent panel at A.E.I. where the divisions on the right were on full display. “I’m not looking for more measures that will put parents into the labor force than spend time with their kids. We need less workism and more familyism.”

This is also why social conservatives generally do not support government funding for child care, while some economic conservatives do — child care makes it easier for mothers to work.

The history of who’s deserving

Debates over American motherhood, amplified by the pandemic, have deep roots. “It really does go back to this idea that there’s this assumption that certain women should work, and that Black women in particular should work,” said Elisa Minoff, a senior policy analyst with the Center for the Study of Social Policy who has researched the history of work requirements.

Slavery laid the groundwork for the stereotype that Black people don’t want to work, Ms. Minoff said, and helped establish a narrow conception of work: as servants, domestics and field hands. Throughout this history, Black women have been viewed more as laborers than as mothers, said the Cornell historian Louis Hyman (any virtue attached to the title of “mother,” he adds, invariably vanishes when a Black woman is a “single mother”).

Black mothers were largely excluded from the earliest experiments in welfare after the Civil War, with widow’s pensions specifically designed to keep women at home with their children. (If they were found to be working, they lost the benefit.)

In the 1930s, a federal program, Aid to Dependent Children, extended help to more mothers and replaced those pensions. But Southern Democrats demanded that states run the program, allowing them to set rules effectively barring Black mothers from benefits. State caseworkers would spot-check whether women were keeping their homes clean enough, or keeping a man around. Some states automatically kicked women and children off benefit rolls during picking seasons when they were needed in the fields.

Such standards, many enduring until the 1960s, weren’t applied to white women. And it was only after they were struck down, and more Black mothers began to rely on the aid, that political momentum grew to attach work requirements.

“It’s a response to the program doing more to actually serve families of color that people start to say, ‘These women should be working,’” said H. Luke Shaefer, a professor at the University of Michigan who studies poverty and social welfare policy.

The typical mother getting government help became, in politicians’ telling, a “welfare queen,” with too many children and not enough personal responsibility. That stereotype led to the 1996 welfare reform law that attached time limits and stricter work requirements to cash assistance.

Employment of single mothers increased, and child poverty decreased in the following years. But both effects were helped by a booming economy in the late 1990s. And many mothers were left without jobs or government benefits, or in jobs that were precarious and poorly paid, while their children were often in low-quality child care.

In the debate over the Biden child allowance, policymakers have focused on its potential to decrease child poverty, a goal with support on both the right and the left. A variety of research shows that growing up in poverty has long-term consequences for children’s physical and mental health, family stability, and educational and career outcomes.

“If this expanded child tax credit becomes a permanent policy, it would really serve as a pillar of a reimagined social safety net, and one that actually is focused on promoting the well-being of children and families, not just increasing the number of hours parents worked,” Ms. Minoff said.

Much of the debate, though, still reflects these old divides. Senators Rubio and Lee, who have supported expanding the child tax credit, want a work requirement because, as they said in a statement, “an essential part of being pro-family is being pro-work.”

Many progressives, in addition to supporting a universal child benefit, say they also support work — but that the way to encourage work and decrease poverty is to improve jobs, such as by increasing the minimum wage and providing predictable hours.

“I would say to those who want to see work requirements as part of this benefit, move that impulse into building a stronger labor market,” Professor Watkins-Hayes said. “The universal child credit was a way to acknowledge the reality that the labor market isn’t able to support families to make sure their kids are happy and progressing well.”

[Emily Badger writes about cities and urban policy for The Upshot from the Washington bureau. She's particularly interested in housing, transportation and inequality — and how they’re all connected. She joined The Times in 2016 from The Washington Post. @emilymbadger

Claire Cain Miller writes about gender, families and the future of work for The Upshot. She joined The Times in 2008 and was part of a team that won a Pulitzer Prize in 2018 for public service for reporting on workplace sexual harassment issues. @clairecm • Facebook]