Elite media would have us believe they are engaged in a serious reckoning with the racism of the US criminal justice system, that they care about over-incarceration and prison conditions. Yet elite media continues its silence about Mumia.

May 8, 2021 Janine Jackson FAIR
Printer friendly
If Mumia Abu-Jamal’s Case Is a ‘Non-Issue,’ Why Have Media Gone to Such Lengths to Silence Him? Published May 8, 2021 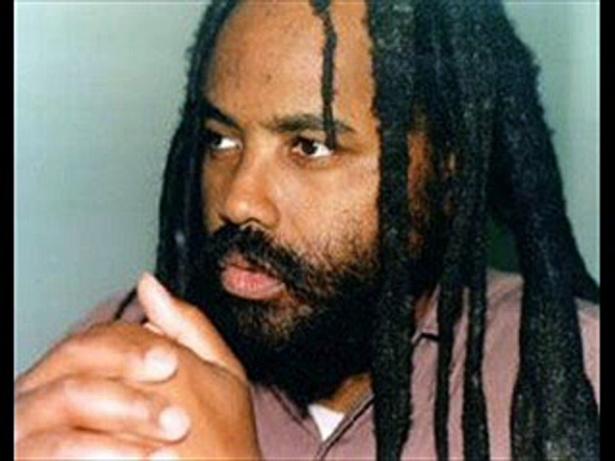 Philadelphia public broadcaster WHYY (4/24/21) was one of the few outlets to report on an April 24 rally seeking the release from prison of Mumia Abu-Jamal. The story included important information on Abu-Jamal, who is serving a life sentence for the 1981 killing of Philadelphia police officer Daniel Faulkner.

It noted that the case has “drawn scrutiny” over claims of police, prosecutorial and judicial bias and misconduct. It cited new evidence released as part of the appeal process, including a note from a key prosecution witness asking the prosecuting attorney for money—the sort of evidence that Johanna Fernandez, a history professor and part of Abu-Jamal’s legal team, notes has in other instances led to a defendant either being set free or getting an immediate new trial.

Along with Fernandez, the piece includes the voices of Abu-Jamal’s brother Keith Cook, and MOVE member Pam Africa, as well as people who traveled from around the country to call attention to Abu-Jamal’s case, his current state of health—he has a number of debilitating conditions, and has just had heart surgery—and to put his story in a context of political prisoners here and around the world.

I confess I was still irked by WHYY using its lead paragraph to frame the story like this:

The case has pitted Abu-Jamal’s supporters, including a long list of national and international celebrities who say he was framed, against police and their supporters, who resent the attention given to a man convicted of murdering a fellow officer.

It bugs me, because those were the themes decades ago when Abu-Jamal was first convicted and sentenced to death (Voices With Vision, 4/27/21). That he was a “cause celebre”—and therefore, wink wink, something something about liberal Hollywood, no need to pay attention—and that the upset of anyone concerned about his deeply flawed trial or his inappropriate sentencing was merely theatrical, because, after all, he was “convicted,” wasn’t he?

Elite media at the time were open to straight-up lies: A 1995 Washington Post story (5/18/95) led with a macabre account from Faulkner’s widow, Maureen Faulkner, about how when her husband’s bloody shirt was held up in court, Abu-Jamal turned around and smiled at her. Except attorney Leonard Weinglass and the court record show that Abu-Jamal wasn’t in court when the shirt was displayed (Extra! Update, 8/95). 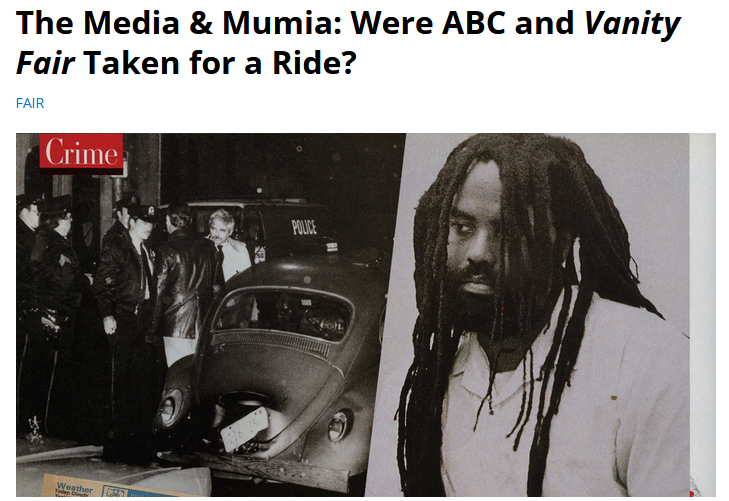 ABC‘s investigative news show 20/20 (12/9/98) employed a number of techniques for their big 1998 piece—stating prosecution claims as fact, even when they were disputed by some of the prosecution’s own witnesses or the forensic record; stressing how a defense witness admitted being intoxicated, while omitting that prosecution witnesses said the same (Extra! Update, 2/99).

At one point, actor and activist Ed Asner is quoted saying, “No ballistic tests were done, which is pretty stupid”—but then host Sam Donaldson’s voiceover cuts him off: “But ballistics test were done,” he says, referring to tests that suggested that the bullet that killed Faulkner might have been the same caliber as Abu-Jamal’s gun. But he didn’t note that tests had not been done to determine whether that gun had fired the bullet, or whether it had been fired at all, or if there were gunpowder residues on Abu-Jamal’s hands.

Producers from People’s Video Network told FAIR at the time (Extra! Update, 2/99) that ABC not only used clips they’d recorded from Abu-Jamal without permission, but they added layers of echo, making him sound, they said, “like a cave-dwelling animal.”

No one was too surprised when it was revealed that in a letter asking permission from the Pennsylvania Department of Corrections to interview Abu-Jamal (a request that was denied), 20/20 pointed out that “we are currently working in conjunction with Maureen Faulkner and the Philadelphia Fraternal Order of Police” (Extra! Update, 2/99).

The main story has been no story

After that, the main story has been non-coverage.

For instance, in 2006, when Abu-Jamal won the right to appeal on three grounds—including a jury purged of Black people, the prosecutor lowering jurors’ sense of responsibility by saying their decision “would not be final,” and the fact that judge Albert Sabo was all kinds of biased—the Philadelphia Daily News told reporter Dave Lindorff that it was a “non-issue” (Extra!, 3–4/06)—although when a judge overturned the death sentence in 2001, the paper (12/19/01) found time to editorialize: “Let Mumia Rot in Darkness.”

The late great media critic Ed Herman (Extra!, 9–10/00) reported how the Philadelphia Inquirer wouldn’t cover rallies and tribunals in support of Abu-Jamal, calling them “stunts,” but when the Fraternal Order of Police bought a full-page ad in the New York Times, that merited a story.

In 2000, when Amnesty International declared that the original trial was “deeply flawed,” the Inky (2/18/00) made it the fifth “news brief” on page 2B.

But if Mumia Abu Jamal’s case is a non-issue that only celebrities care about, why the active silencing? 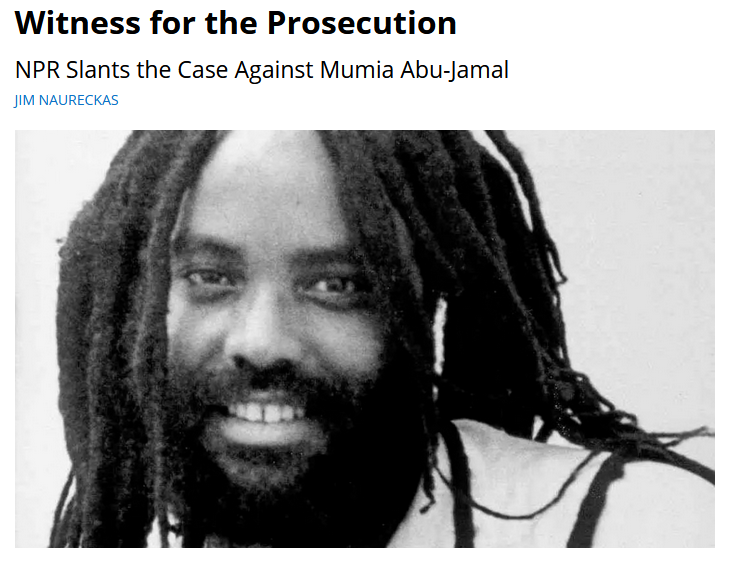 In 1994, NPR cancelled plans for a series of commentaries from Abu-Jamal—who is, after all, a journalist, a former head of the Philadelphia Association of Black Journalists—after Senator Bob Dole threatened their funding. They said it was because it was a “highly polarized and political controversy”—which they proceeded to say nothing about for the following year (Extra!, 11–12/95).

When Democracy Now! prepared to air commentaries, station KRTI, out of Philadelphia’s Temple University, cancelled the show and all of Pacifica news (Extra! Update, 4/97), with a station VP explaining: “What’s good enough for NPR is good enough for me.”

And when a Vermont college aired a taped commencement address from Abu-Jamal, it led Philadelphia lawmakers to throw together something called the Revictimization Relief Act, allowing crime victims  or prosecutors to sue inmates whose behavior behind bars “creates mental anguish” for the victims. Clearly unconstitutional, violating both free speech and due process rights, it was dubbed the Silencing Act by many, who noted that it didn’t just curtail prisoners’ right to speak, but journalists’ and all of our rights to hear them (FAIR.org, 10/22/14).

Elite media would have us believe they are engaged in a serious reckoning with the racism of the US criminal justice system, that they care about over-incarceration and prison conditions. And keeping people behind bars just because powerful people want them there, and not due to the merits of their case? Well, that’s what Other Countries do.

If only there were a case, 40 years’ worth of case, that would allow them to explore those ideals—if not to do justice by Mumia Abu-Jamal (they can’t return what’s been taken from him), then to do some semblance of justice by their own claims of concern.

Janine Jackson is FAIR’s program director and producer/host of FAIR’s syndicated weekly radio show CounterSpin. She contributes frequently to FAIR’s newsletter Extra!, and co-edited The FAIR Reader: An Extra! Review of Press and Politics in the ’90s (Westview Press).  Her articles have appeared in various publications, including In These Times and the UAW’s Solidarity, and in books including Civil Rights Since 1787 (New York University Press) and Stop the Next War Now: Effective Responses to Violence and Terrorism (New World Library). Jackson is a graduate of Sarah Lawrence College and has an M.A. in sociology from the New School for Social Research.

We rely on your support to keep running. Please consider donating. DONATE