Leaving no One Behind in the City: Ensuring Just Transitions for Public Transport Workers

We need a just transition for workers in the transport sector – workers that will be key to our recovery from Covid and to any attempts to tackle the climate emergency.

May 15, 2021 Alana Dave and Bruno Dobrusin Equal Times
Printer friendly
Leaving no One Behind in the City: Ensuring Just Transitions for Public Transport Workers Published May 15, 2021 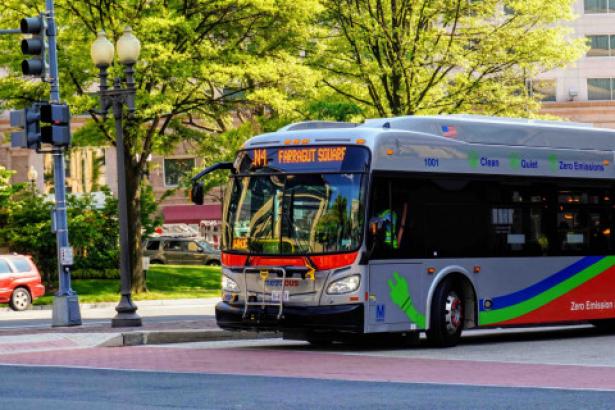 There is a general consensus that cities and public transport will play a central role in the recovery from Covid-19. Some have called this the “urban opportunity”. From investments in sustainable mobility, to enhancing the role of public transport and the electrification of transport, these discussions have often centered on the potential for the transport sector to provide green jobs, lower emissions, to create access and reshape society along more equitable lines in the post-Covid world. The International Labour Organization (ILO) recently published a report highlighting the massive potential for jobs and for lowering emissions if we focus on investments which double down on public transport and electrification.

Often missing from this narrative, as with other narratives on sustainable transport and smart cities, is the role that workers and their representatives will play. In particular, the need for a just transition for workers in the transport sector – workers that will be key to our recovery from Covid and to any attempts to tackle the climate emergency. Similarly, the much-vaunted ‘smart’ city rarely has a clear role for transport workers other than as passive recipients of change. The level of detailed planning that goes into introducing technological advancements is rarely extended to explorations of the effects of these advancements on workers and their livelihoods.

The story of workers in transport in our cities is not only limited to public transport drivers (who are usually the most visible group). There are also maintenance staff, administration, ticketing, cleaners, conductors, workers who intervene in transport through apps (in passenger transport and delivery), and in cities of the Global South, a large section of these worker (in some cities as much at 85 per cent) have informal working conditions, meaning that they do not have access to social security, stable pay, safe working conditions and union recognition. An International Transport Workers’ Federation (ITF) commissioned report from 2018 identified more than 30 occupations linked to informal public transport services in Nairobi.

The climate emergency, coupled with the key role of these workers during the Covid pandemic, means that investments in transport will have to consider, negotiate and include a just transition for workers that climate measures might displace. It is often the most vulnerable transport workers who are worst impacted by the consequences of climate change (through air pollution and extreme weather events), and who are displaced by policies that have good intentions, but are imposed from above, without negotiation at the base.

Transport workers on the frontline of the climate emergency

Introducing mass transit without a just transition for the workers and communities who are central to the functioning of these systems is already leading to displacement and marginalisation. In the Philippines, the Jeepney Modernization Program is threatening the livelihoods of thousands of drivers, who will not have the financial capacity to access new licences for electric vehicles, as mandated by the government. The ITF commissioned two labour-impact assessments showing that the introduction of Bus Rapid Transit in cities like Dakar and Nairobi is leaving behind thousands of workers, mostly in the informal transport economy, who will be displaced from their jobs without a just transition to formal employment or an alternative livelihood to rely on. In Bogotá, the electrification of the Transmilenio system is directly threatening over 6,000 workers in the traditional bus system, whose jobs it will phase out by the end of this year.

Transport workers, and especially those in informal employment, are at the frontline of the climate emergency. They are more exposed to air pollution, flooding, and congestion by the nature of their long hours in cities that have yet to implement serious mitigation and adaptation strategies. They are expected, and needed, to provide their service through extreme weather events, even though many do not have access to decent working conditions and healthcare.

We often hear about transport solutions for cities that do not incorporate the views of the workers who keep cities alive and running. They deserve a just transition that focuses on their immediate and medium-term needs. A just transition for transport workers in cities means many things: access to formal, secure employment; extreme weather pay; access to social security; improved health and safety in their working conditions; recognition of their employee status for app-based workers; ensuring a road to formalisation within the transport system for informal workers; technological changes that benefits workers; special attention paid to the gender implications of the transition, and the specific needs of women workers, who are the most affected by informality and climate change.

A just transition also means redefining who we organise the transport system for, who benefits and how we change the structural conditions that have produced and reproduced existing inequalities. If a policy deepens privatisation, displaces workers and leads to further precarity and informalisation, it may be green and low carbon, but it is certainly not fair for those at the bottom.

These transitions will not be easy or cheap. They will require substantial public funding, and given the complexity of the negotiations, the public sector will need to play a leading role. As the regulator of the city space, and as the only institution with the capacity to manage a just transition that focuses on tackling the climate crisis for workers and communities, it must prevent further encroachment for private use of the common spaces in our cities alongside remunicipalising vital public services.

Alana Dave is the director of urban transport at the International Transport Workers’ Federation (ITF).