Unionizing animators at Floyd County Productions say the company has failed on multiple accounts to live up to its progressive values. 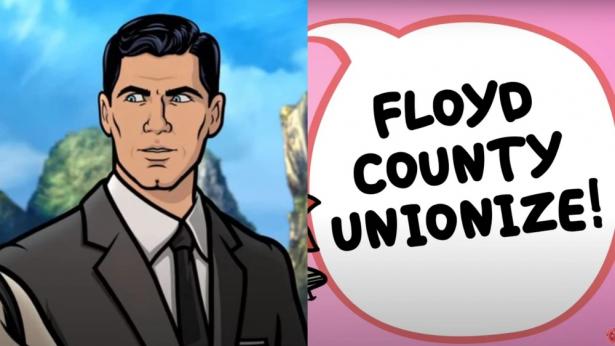 In the first season of the popular animated TV series, Archer, employees at the intelligence agency ISIS discuss unionizing for better pay and benefits. "Deep down, we all know we're being exploited," one worker says in an attempt to agitate reluctant colleagues.

The episode is an homage to the labor movement, with references to socialist union organizer Eugene V. Debs—and jabs at union-busting employers. Their boss, Malory Archer, isn't pleased when she learns workers have decided to strike for a cost of living adjustment. She describes picketing outside the office as “entitled crap," mocking her employees, "'I can’t make ends meet,' 'I'm on food stamps,' 'my child died because I couldn’t afford new bone marrow.' Just me me me me me."

In an ironic turn of events, employees at Floyd County Productions, the animation studio behind Archer, are now unionizing. Floyd County Productions, which has regularly touted progressive values, has not recognized the union, and the union says that the company has hired a union busting firm, has held a mandatory 'captive audience' meeting during work hours, and, according to a charge against the production company filed with the National Labor Relations Board, has "implemented a policy requiring employees to obtain management approval for any media publications or social media postings regarding their employer." The charge states that this policy was implemented "in retaliation for its employees engaging in union organizing." Employees are unionizing with the Communication Workers of America.

A letter written by Mesha Mainor, a Georgia state lawmaker, noted that "a majority of employees … have chosen to be represented for purposes of collective bargaining by the Communication Workers of America." Mainor also noted that Floyd County Productions "refused to cooperate with [the] card check process," a step that is taken in the voluntary recognition of a union.

In a statement to Motherboard, Floyd County Productions denied it was trying to bust the union but did not explain why it has not recognized the union.

"Floyd County Productions generally declines to publicly comment on matters of this nature," Thompson said in a statement. "However, the Company has done nothing to infringe upon its employees’ rights to participate in union-organizing efforts and has not engaged in any activity whatsoever that would amount to an unfair labor practice in any way, shape, or form."

The campaign follows a high stakes union drive at an Amazon warehouse in Bessemer, Alabama, where management engaged in a full-blow union busting campaign and successfully crushed a union drive.

But unlike the Amazon drive, the majority of workers have publicly pledged their support for the union in public. Elected officials and politicians in Georgia, including Stacey Abrams, have written to Floyd County Productions CFO Matt Thompson, asking him to voluntarily recognize the union.

"It is my understanding that a clear majority of employees, who are eligible to be represented by the union, have properly demonstrated interest in and signed a request for unionization," Stacey Abrams wrote to Thompson, Floyd County Production CFO, on March 16. "If that is the case, I strongly encourage your company to listen to their voices and recognize their mobilization."

Floyd County Productions also makes the FX shows Unsupervised and Chozen. Unlike animation studios in California, such as Walt Disney Animation Studios, Amazon Studios, Sony Pictures Animation, and Nickelodeon, which have been unionized for decades, the animation industry in Georgia has yet to successfully unionize.

Workers say they believe a union at Floyd County Production could have a galvanizing effect across animation studios in Atlanta that lag behind the animation studios on the West Coast in terms of protections and benefits. "We are the largest of these studios," said Moe Balinger, a character designer on Archer. "That’s why we felt strongly about this. We want animation workers on the East Coast to have the same conditions as those on the West Coast who are unionized."

Workers at Floyd County Productions began organizing in secret in 2019 with the hopes of increasing their job security in a high-turnover industry, where shows are cancelled, studios downsize, and jobs are frequently outsourced. When a show ends, workers are often placed on "hiatus" and apply for unemployment. Workers say that with a union they could bargain for clearer contracts, end at-will employment, and create an independent healthcare plan that protects workers who are on hiatus. The union encompasses all 153 non-management positions, including artists, animators, IT workers, engineers, editors, and background and layout artists.

"The animation industry is pretty volatile," Heather Hendrix, an illustrator on Archer, told Motherboard. "We’re looking for job security. Within the industry any job can get canned. With a union, we can protect our jobs."

"You are working on something, and you get laid off, no other projects are coming and they downsize or Disney buys the studio," said Brenden Lewis, an illustrator on Archer. "Any of that could happen and you’d be out of a job."

On April 15, three days after the union posted an animated video on YouTube explaining their intent to unionize, human resources announced a new 'NDA' policy via email that “any social media post/interviews that involve [Floyd County Productions] must be received prior approval” according to the unfair labor practice charge filed with the National Labor Relations Board.

The union believes with this new policy, management is illegally retaliating against workers for their union activity. Under the National Labor Relations Act, it is illegal for employers to retaliate against workers for engaging in union organizing or other concerted activity to improve their working conditions.

Management denies the allegations. "[Floyd County Productions] does not prohibit employees from communicating about the Company on social media, unless it relates to confidential content or client communication," Thompson told Motherboard.

"To put this in perspective, in the past, Floyd was a studio that actively encouraged employees to share shows they had worked on," Lindsay Meissner, a compositor at Floyd  County Productions who worked on Archer, told Motherboard. "We had a culture of talking to fans about aired material but suddenly without warning, there was this NDA addendum floating around."

Members of the Floyd County Productions Guild say management has instead pushed forward the idea of holding an National Labor Relations Board election. The union says it will only agree to the election if the company commits to ending its union busting campaign and discontinuing its work with Hawkins, Parnell & Young, the law firm which specializes in representing management in union organizing drives. The firm highlights "successfully defeat[ing] a union organizing campaign on behalf of an international airline manufacturer" on its website.

"We would agree to an election if the company weren't engaging in anti union tactics and hiring union busting lawyers," said Balinger, the character designer. "But the company is not neutral. If they allowed people to vote on what they perceive is their best interest, we'd be happy to go that route."