Molecular anthropologist Christina Warinner, graduate student James Fellows Yates, and a large international team looked at the oral bacteria stuck to the teeth of Neanderthals and preagriculture modern humans that lived more than 10,000 years ago. 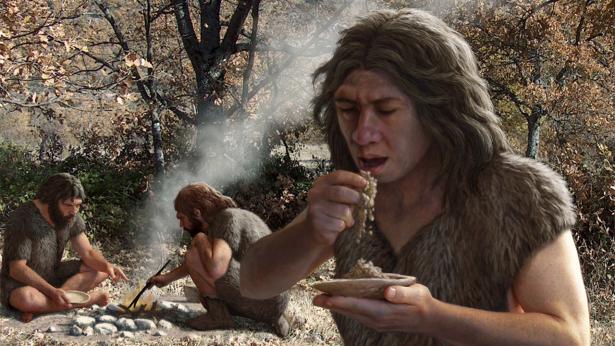 Here’s another blow to the popular image of Neanderthals as brutish meat eaters: A new study of bacteria collected from Neanderthal teeth shows that our close cousins ate so many roots, nuts, or other starchy foods that they dramatically altered the type of bacteria in their mouths. The finding suggests our ancestors had adapted to eating lots of starch by at least 600,000 years ago—about the same time as they needed more sugars to fuel a big expansion of their brains.

The study is “groundbreaking,” says Harvard University evolutionary biologist Rachel Carmody, who was not part of the research. The work suggests the ancestors of both humans and Neanderthals were cooking lots of starchy foods at least 600,000 years ago. And they had already adapted to eating more starchy plants long before the invention of agriculture 10,000 years ago, she says.

The brains of our ancestors doubled in size between 2 million and 700,000 years ago. Researchers have long credited better stone tools and cooperative hunting: As early humans got better at killing animals and processing meat, they ate a higher quality diet, which gave them more energy more rapidly to fuel the growth of their hungrier brains.

Still, researchers have puzzled over how meat did the job. “For human ancestors to efficiently grow a bigger brain, they needed energy dense foods containing glucose”—a type of sugar—says molecular archaeologist Christina Warinner of Harvard and the Max Planck Institute for the Science of Human History. “Meat is not a good source of glucose.” 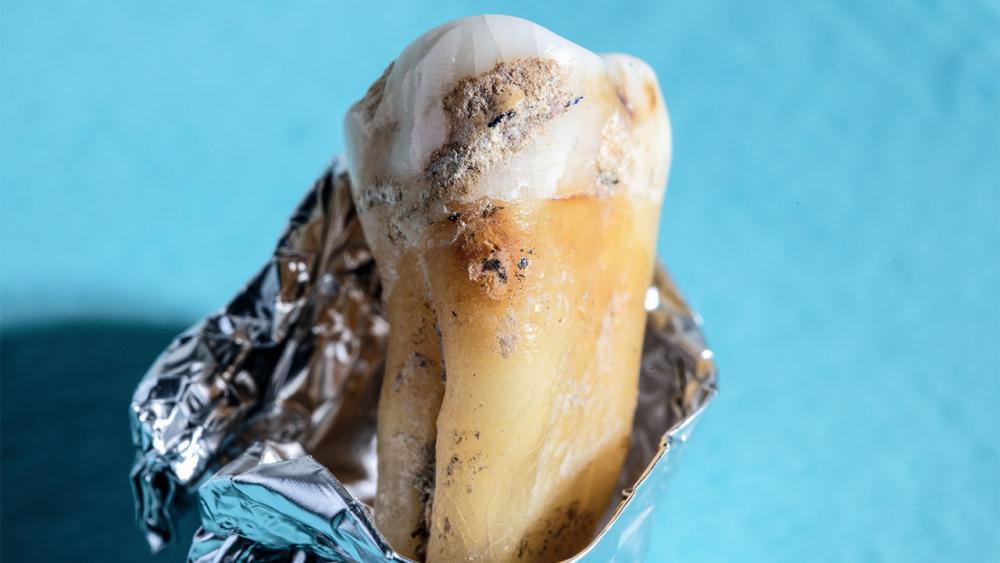 Researchers analyzed the bacterial DNA preserved in dental plaque of fossilized teeth, such as this one from a prehistoric human. WERNER SIEMENS FOUNDATION/FELIX WEY

The starchy plants gathered by many living hunter-gatherers are an excellent source of glucose, however. To figure out whether oral bacteria track changes in diet or the environment, Warinner, Max Planck graduate student James Fellows Yates, and a large international team looked at the oral bacteria stuck to the teeth of Neanderthals, preagriculture modern humans that lived more than 10,000 years ago, chimps, gorillas, and howler monkeys. The researchers analyzed billions of DNA fragments from long-dead bacteria still preserved on the teeth of 124 individuals. One was a Neanderthal who lived 100,000 years ago at Pešturina Cave in Serbia, which produced the oldest oral microbiome genome reconstructed to date.

The communities of bacteria in the mouths of preagricultural humans and Neanderthals strongly resembled each other, the team reports today in the Proceedings of the National Academy of Sciences. In particular, humans and Neanderthals harbored an unusual group of Streptococcus bacteria in their mouths. These microbes had a special ability to bind to an abundant enzyme in human saliva called amylase, which frees sugars from starchy foods. The presence of the strep bacteria that consume sugar on the teeth of Neanderthals and ancient modern humans, but not chimps, shows they were eating more starchy foods, the researchers conclude.

Finding the streptococci on the teeth of both ancient humans and Neanderthals also suggests they inherited these microbes from their common ancestor, who lived more than 600,000 years ago. Although earlier studies found evidence that Neanderthals ate grasses and tubers and cooked barley, the new study indicates they ate so much starch that it dramatically altered the composition of their oral microbiomes.

“This pushes the importance of starch in the diet further back in time,” to when human brains were still expanding, Warinner says. Because the amylase enzyme is much more efficient at digesting cooked rather than raw starch, the finding also suggests cooking, too, was common by 600,000 years ago, Carmody says. Researchers have debated whether cooking became common when the big brain began to expand almost 2 million years ago or it spread later, during a second surge of growth.

The study offers a new way to detect major shifts in diet, says geneticist Ran Blekhman of the University of Minnesota, Twin Cities. In the case of Neanderthals, it reveals how much they depended on plants.

“We sometimes have given short shrift to the plant components of the diet,” says anthropological geneticist Anne Stone of Arizona State University, Tempe. “As we know from modern hunter-gatherers, it’s often the gathering that ends up providing a substantial portion of the calories.”

Ann Gibbons is a contributing correspondent for Science.