The Palestinian Body Is Whole Once Again

Palestinians disconnected from each other have struggled immensely to maintain a national project with clear objectives. Now, struggling together across the entire geography of historic Palestine, the Palestinian body is coming back together.

May 16, 2021 Mahmoud Muna Mondoweiss
Printer friendly
The Palestinian Body Is Whole Once Again Published May 16, 2021 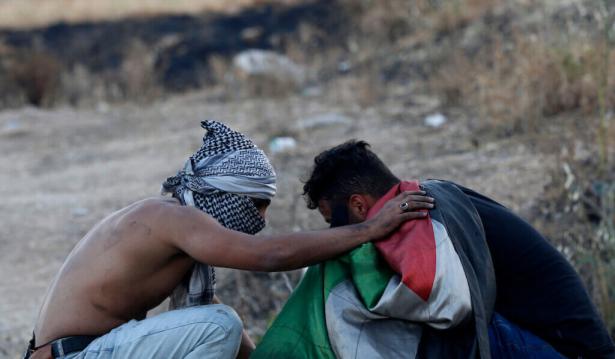 Palestinian protesters clash with israeli soldiers in solidarity with Gaza Strip and Jerusalem near the Hawara Checkpoint south of the Occupied West Bank City of Nablus on May 15, 2021., STRINGER

Let’s be honest: the world is obsessed with the word Intifada. While everything burns around Palestinians, the experts, political analysts and journalists of the world are busy discussing whether the current wave of uprisings could be considered the Third Intifada.

Coined back in 1987, the Intifada was the popular and spontaneous uprising of Palestinians who took to the streets demanding dignity and freedom from the Israeli occupation. The First Intifada ended with the signing of the Oslo Accord in front of the White House in 1994, while the Second — more militant — Intifada started in September 2000 after Ariel Sharon made a highly incendiary visit to al-Haram al-Sharif — the al-Aqsa Mosque. Both of these uprisings came in the form of mass protest movements that lasted for years.

I lived the first Intifada myself as a young schoolboy, when stone throwing and street demonstrations were enough to force Israel to negotiate with what it considered a terrorist organization — the PLO — eventually accepting it as the sole representative of the Palestinian people. My memory of the Second Intifada is more brutal and bloody: the use of heavy weapons was the new normal, with Israeli checkpoints further fragmenting Palestinian cities and villages, causing devastation and humiliation unlike anything before seen. 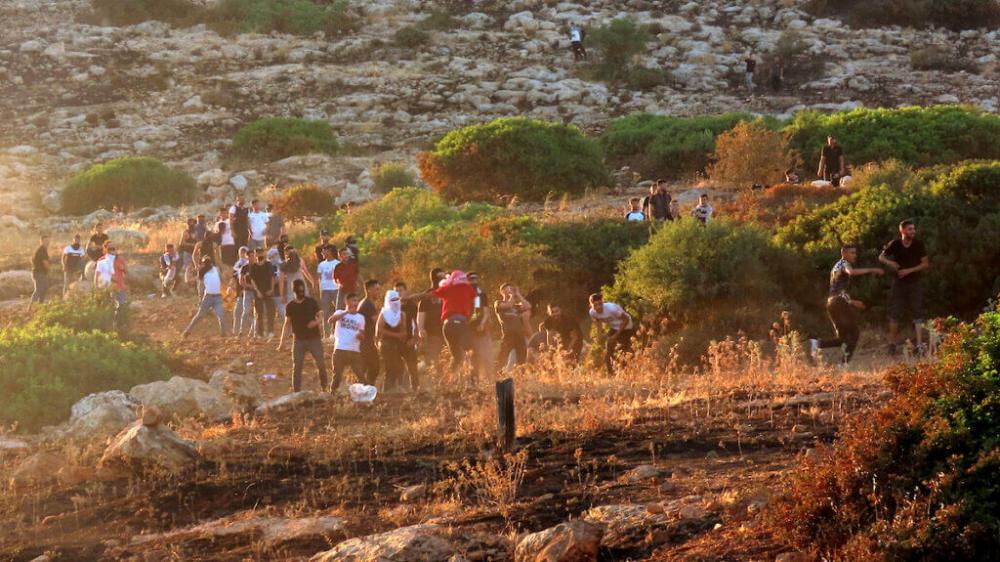 Palestinian protesters clash with Israeli soldiers over violence in Jerusalem, Israeli escalation in Gaza, near Tubas in the Israeli-occupied West Bank, May 15, 2021. (PHOTO BY ODAY DAIBES/APA IMAGES)

As I write these lines, my people are staging another mass protest. Although it started in Jerusalem, it is quickly spreading over the entire geography of historic Palestine — from the Negev Desert to the hilltops of Haifa. But how has the situation escalated this much in just under four weeks?

Years of Israeli military occupation and the escalating settlement building have fragmented the Palestinian polity across several geographical areas. Although we have maintained our strong unifying cultural identity, the reality under occupation is one of subjection to different bureaucratic norms and administrative realities on the ground.

Although some Palestinians within the State of Israel are citizens of the state, those in the West Bank — like my maternal family — are effectively governed by the Israeli Army and the jurisdiction of military courts, while Gazans are even further marginalized and besieged. Meanwhile, as a Palestinian Jerusalemite, I am merely a “resident” of the city — not a citizen of the state — enjoying very limited civil rights, with absolutely no political or voting rights.

Palestinians disconnected from each other have struggled immensely to maintain a national project with clear objectives. But after years of exploitation and increased racism under far-right nationalist governments, this week Palestinians are feeling the revival of their spirit of resistance. Struggling together across several points of confrontation, these disintegrated parts of our body are coming back together. 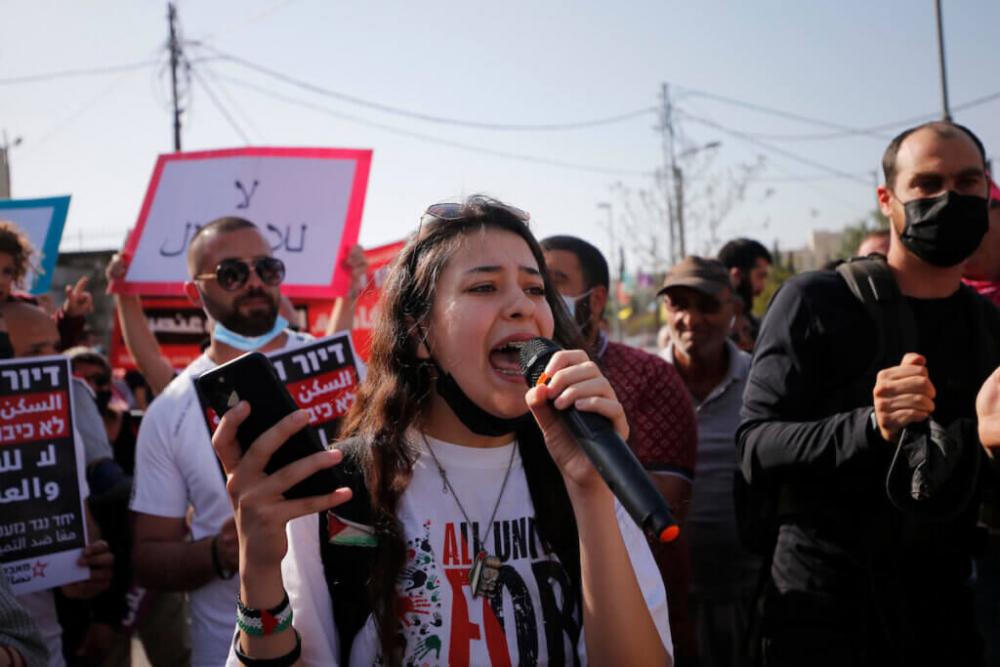 Palestinian activists gather in front of an Israeli settler home during a demonstration against the evictions of Palestinian families in the Palestinian neighborhood of Sheikh Jarrah, in East Jerusalem on April 16, 2021. (PHOTO: JAMAL AWAD/APA IMAGES)

The first demonstration started at Damascus Gate in Jerusalem: the demand was for the Israeli police to remove the metal barrier closing off the Plaza at the gate, the lung of Palestinian social life in the Old City. Although the Israeli police refused to comply at first, after thirteen days of continuous peaceful demonstrations we forced Israel to re-open the plaza during the festive days of Ramadan. Here, the demonstrators were young, relatively apolitical Palestinian Jerusalemites demanding access to local Jerusalem public space.

Just around the same time, a mere hundred meters north of the Old City, twenty-eight families in the neighborhood of Sheikh Jarrah received eviction orders for their homes, in which they’ve lived since 1956. An organization of Jewish settlers managed to convince several Israeli judges — one of whom is a settler himself — that the land beneath these homes is actually owned by Jews as of 1875, seventy-three years before the State of Israel was even born. Many saw this as a clear example of how the Israeli courts are apparatuses of apartheid that manipulate the law to establish new facts on the ground. Invigorated by the Human Rights Watch report recognizing Israel’s apartheid policies, hundreds and then thousands of Palestinians flocked to the neighborhood in a show of solidarity with the families and their legal battle to appeal and reverse this injustice.

During the holy month of Ramadan, tens of thousands of Palestinians access the Al-Haram Al-Sharif nightly, even more so on Fridays. On the 27th night of Ramadan — the holiest of all: the night the Holy Quran descended on the Prophet Muhammad — thousands of extra police and the Army were unnecessarily deployed to the Old City, further escalating the atmosphere in the already tense environment. It was only a matter of time before the thousands of military personnel stormed the Holiest Sanctuary on the holiest day of the year. With their boots, guns and aggression, the Army injured more than 150 people, causing damage to the sacred building, barbarically destroying ancient stained-glass windows and wooden doors. Now the Israeli terror regime had crossed a religious line, violating a religious sanctuary and thus causing fury and anger not only to Palestinians, but to all Muslims worldwide.

We started questioning whether the growing uproar could still be contained when an Israeli settler — before the eyes of the Police — shot and killed a young man at a peaceful demonstration in Lod / Lydda, a town under Israeli control that has long suffered from social problems like crime and drug use due to government negligence. The next day, dozens of towns within the Israeli borders of 1948 organized their own marches calling for police accountability and equal treatment. Unfortunately yet unsurprisingly, the police responded to Palestinians with aggression, while ignoring the right-wing nationalists chanting “Death to Arabs” and calling for the lynching of Palestinians. Almost 2 million Palestinians inside Israel — over 20% percent of the state’s citizens — are finally face to face with the reality of their marginalization. The denial is over, and the community — who are beneath Jewish Israelis in the state’s racial hierarchy — are reverting to their indigenous national identity, aligning their struggle of quality and democracy with that of Palestinians in Jerusalem and the West Bank. 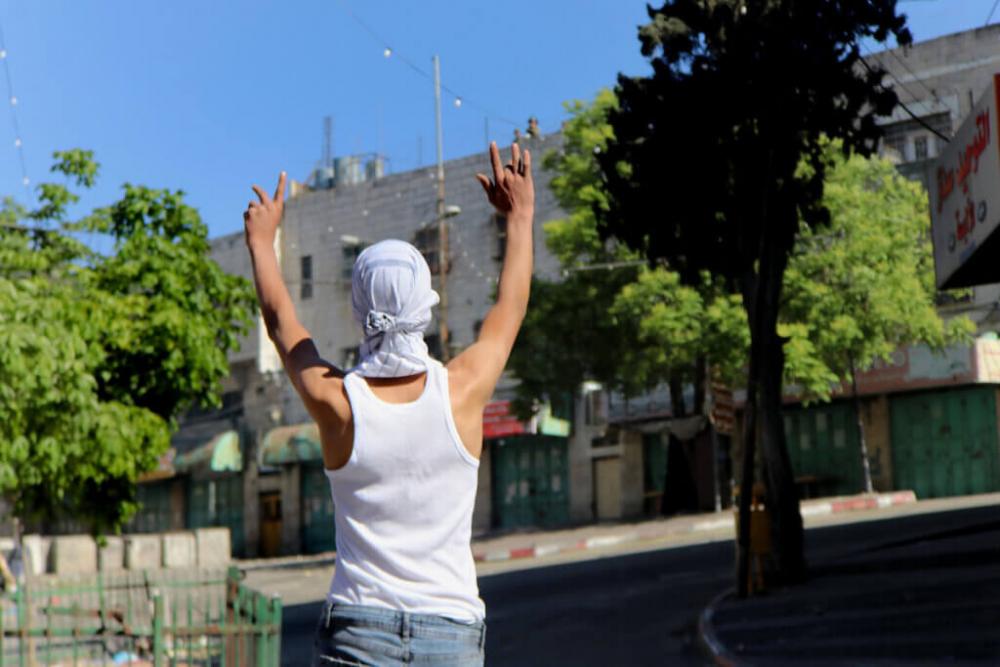 Palestinian protesters clash with Israeli soldiers in solidarity with Gaza and Jerusalem near Bab Al-Zawiya, in the West Bank City of Hebron, on May 15, 2021. (Photo BY MOSAB SHAWER/APA IMAGES)

Meanwhile in Gaza, Israel is implementing its ongoing policy of “mowing the grass” — represented by bloody attacks on the Strip every few years to keep it poor and undeveloped. Since last week, the Israelis’ renewed attack on Gaza claimed the lives of more than 120 people. While Israel threatens to further escalate through land invasion, with little local resistance and no international protection besieged Gazans are left to bleed isolated on the shores of the Mediterranean.

For Israel, the awakening of Palestinian resistance is a threat; for us, this moment represents our hope for freedom and liberty for all.

Finally, Palestinians in historic Palestine are squaring the circle. Whether to consider it the Third Intifada is not important. What is unique about the current uprising is that Palestinians are once again acting in unison to demand freedom, dignity and equality. Local activism is joining forces with the national; the secular among us who work through legal and international law mechanisms are joining forces with religious activists who want to protect our holy sites. Although we are affected differently, the Occupation ultimately affects everyone — no one is privileged, no one is safe from Israeli aggression and racism. For Israel, the awakening of Palestinian resistance is a threat; for us, this moment represents our hope for freedom and liberty for all. Only one route can save everyone from the river to the sea: ending the occupation, ending the apartheid, and ending the oppression.

Mahmoud Muna is a Palestinian culture leader, known to many as the bookseller of Jerusalem. In addition to running the city’s main bookshop, and when not reading, he writes for local and international outlets on current affairs. His interest lies somewhere between language, culture, and identity. He can be reached on @bookseller_jer.

Keep Mondoweiss on the Front Line for Justice in Palestine and Israel. Support Mondoweiss's work informing readers about developments in Israel/Palestine and related US foreign policy: news and analysis unavailable through the mainstream media regarding the struggle for Palestinian human rights.