The Israel-Palestine Narrative Has Evolved

How words like ‘apartheid,’ ‘land theft,’ and ‘ethnic cleansing’ have entered the mainstream conversation

May 23, 2021 Sarah Leah Whitson The American Prospect
Printer friendly
The Israel-Palestine Narrative Has Evolved Published May 23, 2021 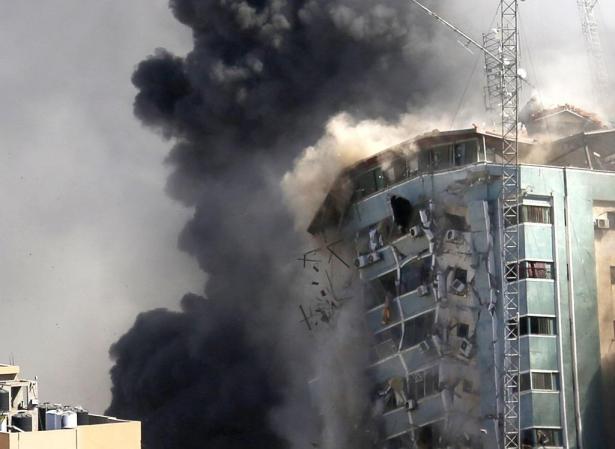 The building housing the offices of the Associated Press and other media in Gaza City collapses after it was hit by an Israeli airstrike, May 15, 2021.,Hatem Moussa/AP Photo

On Saturday, May 15, Israel bombarded a 15-story building in Gaza City, the main media building housing local and international journalists alike, including Al-Jazeera and the Associated Press. While this was not the first time Israel had deliberately attacked journalists, Saturday’s attack neatly symbolized Israel’s desperate efforts to silence the mushrooming discussion of all that is wretched about the Israeli government’s policies both inside Green Line Israel and in the occupied Palestinian Territories. The strictly controlled public narrative, handled in the United States not only by Israeli government spokespersons but the lobbying group AIPAC, the American Jewish Committee, and the Anti-Defamation League cheerleaders in America, has snowballed out of their control.

The images of charred bodies of children in Gaza—59 of the at least 212 Palestinians killed by Israeli bombs as of Monday—flattened and smoldering apartment buildings, traumatized families fleeing their homes with salvaged valuables tucked in their hands: These are not new. They have accompanied so many of Israel’s wars in Gaza (and Lebanon), and frankly are not much by way of competition with the relentless images of devastation and destruction from the Middle East with which we’ve been saturated, even emotionally immunized from, for the past decade from Syria, Yemen, Iraq, Libya, and Egypt.

What is new and qualitatively different is the vigorous and unapologetic analytic criticism of Israel—and U.S. policy that has provided it with billions in annual, unconditional military support for the past several decades—that has seeped into mainstream discourse. From national broadcasters to Washington think tanks, from the floor of the U.S. Congress to street protests in Boston, Chicago, New York, Los Angeles, Washington, D.C., and even Miami, Puerto Rico, Cleveland, and Oklahoma, the conversation has shifted far, far away from the regurgitated, stale defenses of “Israel’s right to exist,” “terrorists,” and “anti-Semitism” to a new recognition of Palestinian rights. Protesters are bringing words to the fore like ‘apartheid,’ ‘land theft,’ and ‘ethnic cleansing.’

Even before the attack on Gaza, the global conversation had been moving away from the Israeli government. In April, Human Rights Watch released a meticulously researched report concluding that Israeli authorities are guilty of the crimes of apartheid and persecution, finding elements of the crimes not only in the occupied territories but within Israel’s borders. This was the first time an international, rather centrist rights organization had issued such a conclusion, building on the work of Palestinian and Israeli organizations that had issued the same analysis over the past few years. Global coverage of Israel’s heavy-handed, violent assault on protesters at Jerusalem’s al-Aqsa mosque, along with protests that erupted in several Palestinian towns inside Israel, in the face of naked efforts to evict Palestinians from the East Jerusalem neighborhood of Sheikh Jarrah, compounded the public relations disaster. These images showed the world what apartheid looks like in practice.

What is new and qualitatively different is the vigorous and unapologetic analytic criticism of Israel.

Even staid American think tanks have shifted their analysis, abandoning the mythical, infinite placeholders of a “two-state solution” and a “peace process,” relied on by Tel Aviv and Washington, to justify the status quo of America’s support for endless military occupation. The Carnegie Endowment for International Peace, where several senior Biden officials hail from, recommends a new policy framework that centers equal rights and freedom for Palestinians and Israelis, living under Israel’s authority in a one-state reality. On the face of it, the call for equality, nondiscrimination, and human rights should be uncontroversial, as basic global values: Who can oppose equal rights? But such a call is tantamount to an intellectual earthquake in the context of Israel, which is legally and politically predicated on Jewish ethno-national supremacy and Palestinian expulsion, a call for equal rights and all that entails—equal voting rights, equal political participation, equal national rights for Jews and Christian and Muslim Palestinians alike.

Your donation keeps this site free and open for all to read. Give what you can...   SUPPORT THE PROSPECT

The shift to a focus on equality for Palestinians has even seeped into U.S. government statements, such as Secretary of State Antony Blinken’s now repeated pronouncement that Israelis and Palestinians should enjoy “equal measures of freedom, security, prosperity and democracy.” Given the wordsmithing applied to every letter, comma, and period of anything to do with Israel in any U.S. administration, it’s doubtful that these words appear randomly. After intense internal negotiations, even the authors of the centrist and Democratic Party brain trust Center for a New American Security were forced to include some grudging language reflecting the new paradigm that borrowed from a 2019 Human Rights Watch report demanding that Israel grant all Palestinians under its authority rights “at least equal to” the rights enjoyed by Israeli citizens. But when even the conservative, uber-cautious U.S. government–funded RAND Corporation is urging America to cut its military support to Israel, as it did in its behemoth report on U.S. policy in the Middle East last month, because they think it’s not at all in America’s interest, it’s hard not to see a major change.

Certainly there are many ivory-tower holdouts, half-heartedly clinging to their dusty, feeble talking points, insisting on resurrecting the corpse of the two-state solution, refusing to accept the apartheid diagnosis because it will make peace “harder,” or suggesting we stop talking about how “morally damning” it is because “it won’t make a difference.” But they are increasingly left out of where the conversation about policy prescriptions is happening: the right to return not just for Jews but for Palestinians, and coming to terms with the reality that one state—whether an apartheid state or one built on equality—is the only real viable option.

The shift to a focus on equality for Palestinians has even seeped into U.S. government statements.

The evolution of the public narrative, from the fiction of Israel as “a land without a people, for a people without a land,” to the reality of brute military occupation and apartheid results from a confluence of factors. The most important has been the ability of Palestinians to document, report, and explain their daily lives under subjugation and military occupation to a broader, global audience; they have leapfrogged, using social media, over traditional media gatekeepers that would otherwise routinely depict them as a singular terrorist entity. Some Palestinian voices have even broken through to be heard in mainstream video, like Mustafa Barghouti, general secretary of the Palestinian National Initiative, and Mohammad Al-Kurd describing his eviction from the Jerusalem neighborhood of Sheik Jarrah, on CNN.

The increased diversification of the foreign-policy establishment, within Congress, think tanks, academia, and journalism, to, at last, include not just people of color generally, but Muslims and Arabs in particular, has been another factor in this evolution. Their analysis and reportage are naturally filtered through their own experiences of and understanding about discrimination and exclusion around the world. The intersections between lethal, knee-on-neck policing in America targeting African Americans and lethal, knee-on-neck military rule in Israel targeting Palestinians, both amply funded by American taxpayers, have become much plainer to see for this new generation.

Your donation keeps this site free and open for all to read. Give what you can...   SUPPORT THE PROSPECT

While in the past, Israel loyalists could wield their power, influence, and wealth to ensure such voices were denied tenure, fired from media jobs, or otherwise sidelined professionally, the numbers of diverse, critical voices have just become too many to quash, like a never-ending round of whack-a-mole. Certainly, the apologists are still much more powerful than the critical voices, which is why one fears that the courageous reporting of journalists at MSNBC, like Ayman Mohyedin and Mehdi Hasan, who have presented TV news coverage and analysis of Israel-Palestine to an American audience like we’ve never seen before, may well be shut down, or watered down, by the corporate bosses there.

The vitriol against critics of Israel, and smearing them as anti-Semites, persists. It is supported by anti–Boycott, Divestment, and Sanction laws in at least 30 states that seek to punish Americans who advocate for accountability for Israel and by the International Holocaust Remembrance Alliance’s definition of anti-Semitism, which has already been used to launch formal investigations of professors at several universities deemed to be too critical of Israel’s policies.

The pro-Israel camp and their allies in the military defense industry also continue to dominate both Congress and the executive branch through matchless political donations and lobbying that has enshrined military support for Israel into U.S. law. Just this week, amid the bombardment of Gaza, President Biden approved $735 million in Boeing arms sales, including JDAM guided-missile kits, to Israel, reiterating the mantra of “Israel’s right to defend itself,” and blocking not one, not two, but three efforts to secure a ceasefire resolution at the U.N. Security Council, to ensure Israel has ample time to exercise this right.

It’s hard, in an American society so focused on racial justice, to justify support for an ethno-national state that privileges one racial group over another.

This time, however, the pushback from increasing numbers of members of Congress has been vocal, unequivocal, and unapologetic. It’s not just the most progressive members of Congress who have spoken out, like Reps. Alexandria Ocasio-Cortez, Rashida Tlaib, Ilhan Omar, Andre Carson, and Ayanna Pressley, but even more powerful members of the House and Senate, like Gregory Meeks, chair of the House Foreign Affairs Committee, who denounced the lack of transparency about the pending arms deal and promised to scrutinize it, and Sens. Todd Young and Chris Murphy, who issued a bipartisan call for a ceasefire.

The bottom line is it’s just really hard, in an American society so focused on racial justice, to justify support for an ethno-national state that privileges one racial group over another in a diverse, mixed-race and -religion society. It’s become impossible to keep mouthing that human rights are for all humans—except Palestinians. Even Andrew Yang, New York City’s most prominent mayoral candidate in a city with perhaps the most sizable Jewish American electorate, was forced to walk back his full-throated vow of support for Israel amidst the bombardment of Gaza with a more balanced statement that acknowledged the humanity of Palestinians.

Real power on Israel-Palestine does not yet reside with the people. But if shifting American sentiment about our relationship with Israel is any indication, the gap between what the American government does for Israel—and to Palestinians—and what the American people think is fair and just has become a chasm that may well create openings for real political change.

The American Prospect depends on reader support. If you are scraping by right now, please don’t give us anything. But if you have the ability to support independent, non-profit journalism, we are so grateful. Your voluntary contribution helps keep this website paywall-free. You can sign up as a subscriber with a range of benefits, including an opt-in to receive the print magazine by mail.