food High on the Hog is an important, long overdue journey through African American food history

Food history – and food programming on TV – has been whitewashed for centuries. This powerful series sets an example of how to start correcting the record 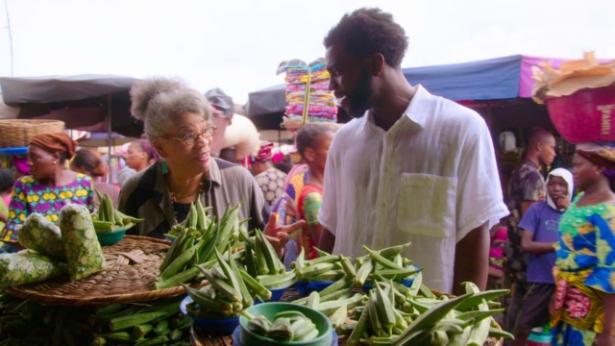 Dr. Jessica B. Harris and Stephen Satterfield visit a market in Benin in High on the Hog: How African American Cuisine Transformed America , Netflix

Netflix’s High on the Hog: How African American Cuisine Transformed America begins in Dantokpa Market in Cotonou, Benin, where Stephen Satterfield and Dr Jessica B Harris (whose book inspired the show) meander through piles of emerald green okra and yams the size and shape of dinosaurs’ feet.

The trip to the market is a staple in formulaic foody travelogues, which usually involve a famous chef being guided around the vivid, bustling stalls before cooking their own spin on the national dish in a rented villa. High on the Hog isn’t a travelogue – it is a novelistic, powerful documentary about food and history and how the foundations of America’s culinary traditions – from Thanksgiving dinner to southern barbecue to mac ‘n’ cheese – rest on the food culture brought over from Africa. Benin is where 1 million African people were shipped across the sea in the transatlantic slave trade. Okra, Satterfield says, “made the voyage with us.” “We brought it to the New World,” Harris continues. “It’s the connector”.

Food transcends sustenance and indulgence in this four-part series: it is the key to understanding American history, and key to the process of undoing centuries of whitewashing. It is absorbing to watch, as Satterfield – food writer, sommelier and now gentle, unrehearsed presenter – brings emotion and insight to the broad and living subject of African American food.

A chef he meets, early on, says, “We call our food soul food, we are the only people who named our cuisine after something invisible, that you could feel, like love and God, something completely transcendental. It’s about a connection between us and our dead, and those who are waiting to be born”.

High on the Hog is cinematic and visually stunning, made with a black production team and directed by Roger Ross Williams, the first African American director to win an Oscar. The series begins to correct the historical record, as well as correcting the erasure of black cooks and filmmakers in food TV.

Throughout, Satterfield’s journey balances joy – each episode opens with a montage of song and dance – with sadness and disbelief, at how many important figures have been overlooked for so long. The opening credits are a supercut of archive footage of white children pouring Aunt Jemima syrup on their pancakes, shrimps on the grill, a Historically Black College and University marching band, a KKK march, a hand ladling rich sauces from high.

Starting with “Our Roots” in Benin, Satterfield walks the slave route, eats fried fish and oily peanut sweets in a floating village, and breaks down in sobs in the Cemetery of Slaves, a long, anguished and moving scene unlike any I have seen in food programming before.

In “The Rice Kingdom”, he travels to South Carolina and makes Gullah food – roasting a whole pig, he learns how unwanted cuts of meat given to slaves shaped the Southern stews to come; he asks why so many black restaurant owners are still overlooked in Charleston; he interrogates a white farmer about his feelings about profiting from rice – and its part in slavery.

In New York and Philadelphia in “Our Founding Chefs”, he learns about Thomas Downing, the free black man who created an oyster empire in the 19th century and James Hemings, Thomas Jefferson’s cook who became the first chef to train in France and brought home staples like macaroni with him, before he trained his brother to replace him in exchange for his freedom.

In “Freedom”, in Texas, Satterfield meets cowboys at an all-black rodeo and visits a baking blogger making cakes for Juneteenth who tearfully tells him that “the kitchen is one of the safest spaces for me”: at every turn, the African American past and present are intertwined.

Food TV, especially in Britain, is too often hasty and clean and apolitical, divorced from its greater context to our history and culture. High on the Hog should set a new precedent – a vegetable or fish or spice morphs from food on a plate to a crucial symbol of generational importance, the mood moving fluidly from angry to celebratory.

It is not only long overdue recognition of black food and its contribution to America, told by African Americans, but a story about how many families, cooks, and farmers, restauranteurs, and historians have committed to honouring their ancestors and preserving their legacies and traditions to ensure they will not be forgotten. Mainstream television should start making the same commitment.