The movement for women's lives finds a new cultural expression across Latin America, and reports from four continents 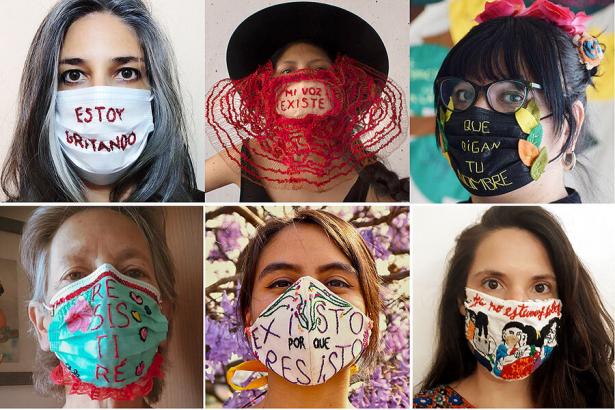 Clockwise from upper left: “I'm screaming” (Uruguay), “My voice exists” (Peru), “Let them say your name” (Chile), “We are no longer alone” (Argentina), “I exist because I resist” (Mexico), “I will resist” (Chile). Credit, courtesy of Des-bordando Feminismos

Discrimination, police violence, and disparities between Palestinians and religious settlers in the city of Lydd have led to the largest uprising in decades.

Protesters voiced support for the recent ceasefire between Israel and Hamas and called on the government to take immediate action to reach peace with the Palestinians.

The West Papuan provisional government has just announced that it has covertly established a cabinet and government departments, along with having appointed ministers, inside Indonesian occupied West Papua to directly challenge Jakarta’s rule.

__________
Protest Embroidery and the Fight Against Femicide

These women in Latin America turn stereotypes about needlecraft upside down. In their hands, beautiful sewing is an act of protest against violence – stitching their pain, resilience, and demands for change.

The climate movement lacks economic power, and workers need political arguments that appeal to the whole of society. With unions as a hinge between those two groups, we were looking for a campaign to bring their interests together.

Madrid’s electoral result does not directly affect the progressive government in Spain. The federal system in Spain makes difficult for the radicalized right to have the necessary alliances to rule the country, but we must not lower our guard against the radicalization of the right and the media messages demonizing all progressive thinking.

“We need a society in which development is truly for people... a political system where power is really of the people, by the people and for the people.”

There are radical changes in the political climate in Russia: the dissatisfied, those seeking a way out of the dead end of our national politics, now number in the millions.

Julia Lovell’s Maoism: A Global History contains a wealth of material indispensable for the twenty-first-century left to consider if we are to avoid the terrible mistakes of the past.

The South African activist and man of letters used language as a weapon to defend the marginalised and reflect upon the people, places and culture that defined him.