Corporations like Amazon need to pay their fair share so we can address decades of delayed essential maintenance and upgrades to provide all Minnesotans with safe roads and bridges, affordable housing and functional school buildings. 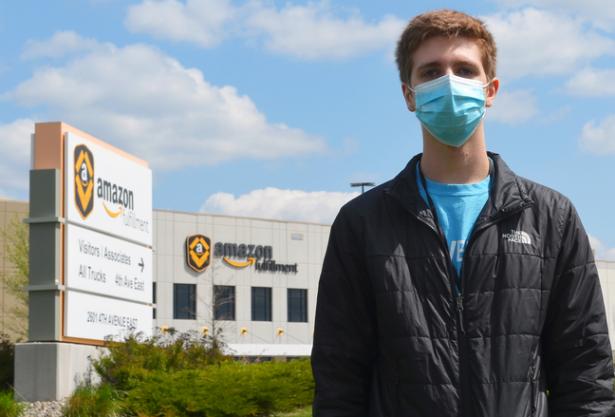 Minnesota workers unfurled a “Tax the Rich” banner outside Amazon’s MSP1 fulfillment center here today. It was a not-so-subtle suggestion to state lawmakers about how they might pay for investments in child care, paid family leave, education, infrastructure and other supports for working families.

Tyler Hamilton, in his fourth year working at MSP1, said he and others inside the facility could use a little support right now.

“Honestly, I’m tired,” the Maplewood resident said during a press conference organized by local unions. “And I’m not just tired from working night shift, even though I’m a night-shift guy.

“I’m tired from working in this building behind me for over a year during the coronavirus pandemic and having to deal with all the stupid stuff Amazon does all the time – and they get away with.”

But the pandemic has been anything but exhausting for corporations like Amazon and the wealthiest Americans. With stock markets posting record gains over the last year, the super-rich have consolidated even more wealth. U.S. billionaires increased their combined wealth by $1.62 trillion, or 55 percent, between March 2020 and April 2021, according to an analysis published last month.

Inequality in the U.S., already sped up by corporate tax cuts in 2017, has shifted into overdrive. “Evidently, those tax cuts don’t go toward their workforce,” Hamilton said. “It’s really frustrating.”

Minnesota lawmakers have an opportunity to restore some fairness to the system before the Legislature’s scheduled adjournment May 17, other speakers at the event outside Amazon said.

Mary Solheim, a child care provider from Maplewood, described a state of “chronic underinvestment in care for the children” of Minnesota’s workforce – a crisis made worse by the pandemic, as frontline workers not eligible for essential care struggled to find care for their children after school buildings shut down.

Solheim was precise about where to pin the blame. “We know there is enough for everyone to thrive in Minnesota,” she said. “But for too long, corporations haven’t paid their fair share.”

Meeting students’ needs, she said, requires smaller class sizes, more access to counselors and other specialists, healthy meals and safe buildings. But instead of fully funding those priorities, school districts across Minnesota are preparing to lay off teachers, a response to uncertain state funding.

“This year let’s demand that our Legislature ensure the wealthiest among us pay their fair share,” Schmidt said. “That’s how we fund the future of our students, by ensuring every child has what they need to focus on all they can become, whether they are black, brown or white.”

Chelsie Glaubitz Gabiou, president of the Minneapolis Regional Labor Federation, emcees a press conference calling on corporations like Amazon and the super-rich to pay more taxes.

Octavio Chung, a union Laborer from Hugo, said improvements to the state’s transportation system and other infrastructure are urgently needed. Corporate profits rely on getting products to customers, after all.

“Corporations like Amazon need to pay their fair share so we can address decades of delayed essential maintenance and upgrades to provide all Minnesotans with safe roads and bridges, more affordable housing and functional school buildings,” Chung said. “It is long past time.”

Debate over whether to fund these and other priorities is likely to heat up at the Capitol next week, as the deadline to adjourn draws closer.

Gov. Tim Walz has proposed – and Republicans in control of the Senate have opposed – small tax hikes on some corporations and on individual income over $500,000, or over $1 million for married couples filing jointly.

Among the proposed investments Walz and DFLers who control the Minnesota House would make with the extra revenue is paid family leave for all Minnesota workers. That’s a measure Hamilton, who believes he contracted COVID-19 while working at MSP1 last year, said is long overdue.

“I was out of work for a month, the majority of that being unpaid,” Hamilton said. “It’s tiring having to work hard to pay your bills – 10-hour shifts, 12-hour shifts – only to be hit with something like getting sick and falling behind because we don’t have paid family medical leave or paid sick leave like we should.”