"A ton of our work is dragging elected officials toward where their voters actually are," says Working Families Party New England Regional Director Georgia Hollister Isman. She shares her take on where the Dems are to kick off new interview series. 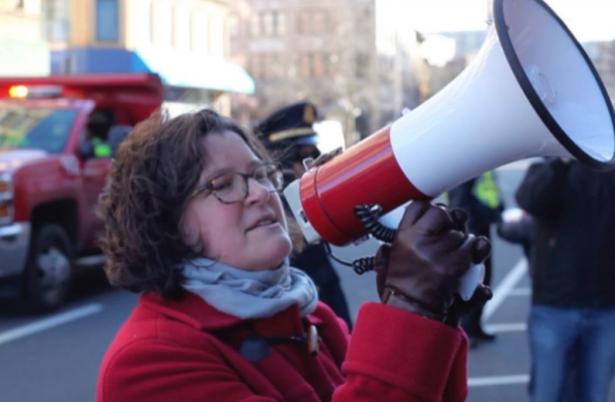 [This is the first in Organizing Upgrade’s new interview series, “Mapping the Moment.” We’ll be talking with activists and organizers about pressing issues and strategic questions that define the terrain our movements work in. To start, we asked people how they understand the Democratic Party at the moment. How do we understand the rifts in the party as a new economic policy direction emerges? How do we push moderate Dems and take advantage of openings for leftists and progressives – while fighting the Right at the same time? In the interview that follows, the New England Regional Director for the Working Families Party, Georgia Hollister Isman, says that we need to keep pushing for real solutions.]

Can you start by telling us a bit about what you do?

I supervise the state teams in Rhode Island and Connecticut and work on more discrete projects in the other four New England states. I am also part of the WFP national political team. Most of my work is focused on contests among Democrats, both electorally and legislatively.

Are you seeing a shift within the Democratic Party in terms of their political priorities and orientation? And if so, does it make it easier or harder to figure out how to work with them?

I would say no, the Democratic Party is not changing much. They tend to be harbingers of the status quo and the last to move left. What has changed has been the mainstream common sense – the sort of Main Street thinking.

For example, when we started working on a $15.00 an hour minimum wage a few years ago, people said it was crazy and now it’s just about to pass in Rhode Island this week and it’s passed recently in Connecticut. It seems more common sense to people.

But Democratic Party structures and elected officials are slower to shift. A lot of Democrats holding power in states and nationally got into office at a time when you couldn’t talk about marijuana legalization or other big ideas, so a ton of our work is dragging elected officials toward where their voters actually are. Voters are shifting, and if elected officials are smart, they are following. but that takes a lot of work.

VOTERS ARE ATTRACTED TO REAL SOLUTIONS

What is happening to explain how voters are shifting to the left?

I think voters are attracted to real solutions, not complicated compromises. And in the last ten years or so we’ve had a lot more people articulating those real solutions. A lot at the top of the ticket, like in the Bernie Sanders and Elizabeth Warren campaigns, but that’s also been happening at the state and local level. It’s expanded the window of the possible. That is part of our work: to expand the window of the possible. Then voters say, “yes, I want that” and our job is also to convince legislators that aren’t already there to follow their voters.

So how does WFP navigate this fine line, of pushing Democrats to the left, but also building support for the WFP?

I think people in general are emerging from four years where there was absolute moral clarity in being in opposition to Trump and it is a trickier position now to figure out how to relate to Biden. A lot of stuff that he’s doing is good. It’s not what we would do if we if we ran the country, but it’s like 25% of what we would do.

I think our vision would be really different and much bigger. I think our role is first to continue to articulate the things that we actually want. So for example, we are working on the THRIVE Act and calling for a $10 trillion investment. Biden’s plan is a $4 trillion investment, which is a big difference. We think articulating the big, bold vision actually works in the long run. We work to clarify the differences that exist, such as the Democrats would support trillions for infrastructure but won’t support the commitments to environmental justice.

Or the Democrats who say they’re voting to pass $15.00 an hour minimum wage. That’s great, we support that, but they don’t support an increase in the tipped minimum wage. But we will continue to call for that and push them on the issue. We acknowledge that there are differences and some of the issues are more complicated, but we will push for things to improve the lives of a lot of working people and support racial justice.

And how does that happen? How do you keep pushing on the issue?

I think our lane in WFP is to think about these things as they relate to elections. The thing that we do is make these issues priorities in elections and then, of course, win some elections!

Those electoral victories don’t just put good people in office but give other people who are in office and who are reading the tea leaves the sense that, “the arena is shifting under me and I need to follow.” WFP is going to continue to push by running on big bold policy proposals and ones that are explicitly to the left of the mainstream of the Democratic Party. And we will be clear that while Biden is doing a lot, he’s not going to do everything that we want, everything that we asked for, and everything that we need.

WFP also has good partnerships with The Frontline and through that we are doing more protest-type activity in West Virginia around Joe Manchin and creating an on-the-ground demand for things like $15.00 an hour federal minimum wage. But I think anybody at WFP would tell you the thing that we specifically are best at is making these big issues matter in terms of shifting the terrain and the window of the possible on issues.

Can you say more about what happens once people are elected? Is there a way to hold them accountable to their promises? Are there WFP legislative caucuses?

That’s a little bit of the Holy Grail. We’re really trying to figure that out. In different places we have different ways of working with our champions to move stuff forward. In Connecticut there is a coalition of folks working on the campaign to tax the rich as a suite of tax proposals that raise much money to invest in recovery. They have a huge group of progressive legislative champions working on that already. About 20% of the legislators are with us no matter what, on every issue. And then there’s the next 10%, who are more issue-to-issue and often it is more effective for us to think about how we organize them on a particular issue.

But in the long run we would love for there to be WFP caucuses.

On the flip side of our political spectrum is growing white nationalism, a continuation of Trumpism or authoritarianism, however you might call it. Does your strategy of pushing to the left carry a risk of alienating voters? Is the hope that pushing to the left can undermine support for Trumpism?

This is a really tough nut to crack. I do think there are people who see these kinds of corporate Democrat compromise solutions as irrelevant to their lives, and they have turned from the Democrats but will be attracted to a WFP-type of working-class populism. For them left populist solutions are relevant.

What keeps you going right now? What is most exciting about your work?

The thing that keeps me going are the people who are stepping up to run for office, mostly at the state and local level. The working-class activists, the women of color, the people who have been organizing in our communities that nobody in politics noticed that much for a long time. That’s the thing that’s exciting and that’s the shift that matters. I’ve been doing this long enough to remember when Ayanna Presley decided run for City Council for the first time. I know that shift in people’s thinking about running for the first time is going to remake the whole country over time.

And part of your work is helping them do that? Give them training?

Yes. Some of it is formal training and some of it’s late night conversations. Listening to them, talking with them about what is happening in the campaign. Reassuring them that it is not impossible.

[Stephanie Luce is a professor at the School of Labor and Urban Studies/CUNY. She is the author of 'Labor Movements: Global Perspectives and Fighting for a Living Wage' and is an Editor of Organizing Upgrade. Her writing can be found at stephanieluce.net.]