A series of slave revolts terrified white residents and helped fuel the rationale for gun ownership. 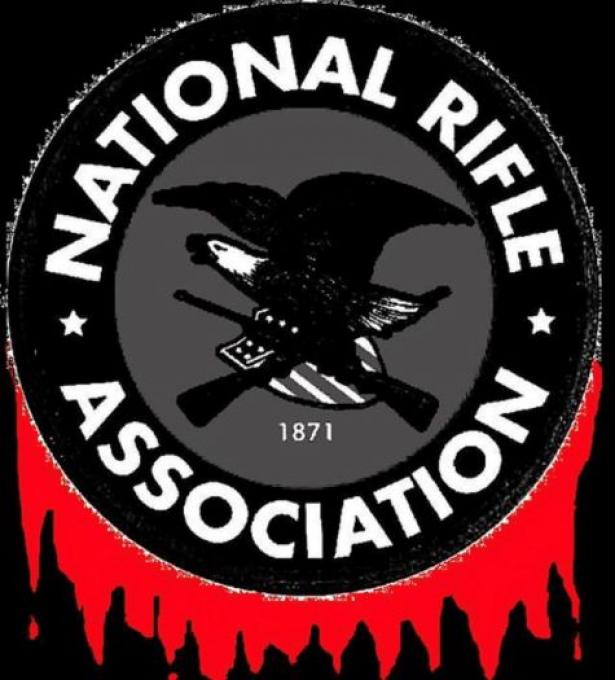 Your NRA, exploiting a tragedy to advance a pre-existing political and economic agenda" by Patrick Feller is licensed under CC BY 2.0,

Bodies are piling up all over the second amendment as two of America’s pandemics converge. The “plague of gun violence” and the inability to mount an effective response, even in the wake of multiple mass shootings, is, unfortunately, rooted in the other pandemic gripping the United States: anti-Blackness and the sense that African Americans are a dangerous threat that can only be neutralized or stopped by a well-armed white citizenry.

For too long, the second amendment has been portrayed with a founding fathers aura swaddled in the stars and stripes.

But “a well-regulated militia” wasn’t, as the story goes, about how valiant and effective the militias were in repelling the British. George Washingtonwas disgusted with their lack of fighting ability and the way the men would just cut and run from battling against a professional army. Nor was the militia reliable as a force to uphold the law. In Shays’ Rebellion, bands of armed white men, who were in the state’s militia, attacked the Massachusetts government because of foreclosures and debt seizures, demonstrating, again, how unreliable the militia were. Boston merchants had to hire mercenaries to put down the rebellion.

On the other hand, where the militia had been steadfast was in controlling the enslaved Black population. Access to guns for white people was essential for this function.

In 1788, at the constitutional ratification convention in Virginia, a major source of contention was that the draft constitution had placed the training and arming of the states’ militia under federal control. Virginians Patrick Henry and George Mason balked, and raised the specter of a massive slave revolt left unchecked because Congress could not be trusted to summon the forces to protect the plantation owners. Mason warned that if and when Virginia’s enslaved rose up (as they had before), whites would be left “defenseless”. Patrick Henry explained that white plantation owners would be abandoned because “the north detests slavery”. In short, Black people had to be subjugated and contained and state control of the militia was the way to do that.

The sheer brutality of human bondage, where plantation owners were notorious for “barbarities such as scalding, burning, castrating and extracting the tongues or eyes of slaves”, had created an overwhelming fear among whites of the enslaved’s capacity and desire for retribution. A series of revolts in the 1600s and 1700s terrified white residents and led to a slew of laws forbidding Black people from having any weapons, including guns. The militias’ all-important role was to quash those revolts, especially if the uprising was widespread, as in the 1740 Stono Rebellion in South Carolina.

This function of the militias was so important during the war of independence that governments such as that in South Carolina devoted the lion’s share of their white manpower to the containment of the enslaved. As a result, the colony did not have enough white men to join the Continental Army and repel the British. The calculus was simple: it was more important to the plantation owners in the colonial government to maintain slavery and control Black people than to fight for American independence.

In other words, concerns about keeping enslaved Black people in check are the context and background to the second amendment. The same holds true for today.

In May 2000, NRA president Charlton Heston invoked the constitution and then asserted, as he held a 19th-century-era rifle over his head, that the only way that Al Gore and other liberals would take his gun would be “from my cold dead hands”. That unyielding statement was a response to his people supposedly being under attack. Three years earlier Heston had declared: “Heaven help the God-fearing, law-abiding, Caucasian, middle-class, Protestant or – even worse – admitted heterosexual, gun-owning or – even worse – NRA-card-carrying, average working stiff.”

Nearly two decades later the Colorado congresswoman Lauren Boebert, who bragged about carrying her Glock to work in Washington DC, echoed that same defiance and fear as she wrote to her followers: “I told Beto [O’Rourke] HELL NO to taking our guns.” Without weapons, she exclaimed in a fundraising ad, her overwhelmingly white constituency would be left defenseless against “gang members, drug runners and thugs”, pejoratives that are often deployed as synonyms for African Americans.

Previously, Dana Loesch, NRA spokeswoman, had painted a similar picture of “them” screaming “racism,” breaking windows, burning cars, bullying and terrorizing “the law-abiding”. And, she added, when the police are called “to stop this madness, “they” get outraged. The only way we save our country and our freedom, she asserted, is to “fight this violence of lies with the clenched fist of truth”. Clearly, the same clenched one that Heston held over his head holding a gun.

Thus, the slaughters in Sandy Hook, the Pulse Club in Orlando, Mother Emanuel AME Church in Charleston and San Bernardino did not lead to any meaningful gun safety laws despite the staggering casualties. The rampant anti-Blackness that dominated Barack Obama’s presidency helped to short-circuit a tangible, legislative response. Instead, the fear of being left defenseless to a nation with a sizable Black population and Black leadership was palpable. Gun sales soared by 158% as did the rise of anti-Black rightwing militias.

The Wisconsin senator Ron Johnson, who has an A rating from the NRA, sums it up. He didn’t fear white insurrectionists who stormed the US Capitol, injured 140 police officers, built a gallows to “hang Mike Pence” and hunted for Nancy Pelosi; he would have been afraid, however, if it had been Black Lives Matter. Indeed, because that fear and the second amendment mean that Black lives don’t matter. And whites and others caught in the crosshairs of mass shootings are the collateral damage and pay the price.

Carol Anderson is the Charles Howard Candler professor of African American studies at Emory University. She is the author of White Rage and The Second: Race and Guns in a Fatally Unequal America