When popular struggles defy borders and demand statehood, and left views on the Palestine crisis 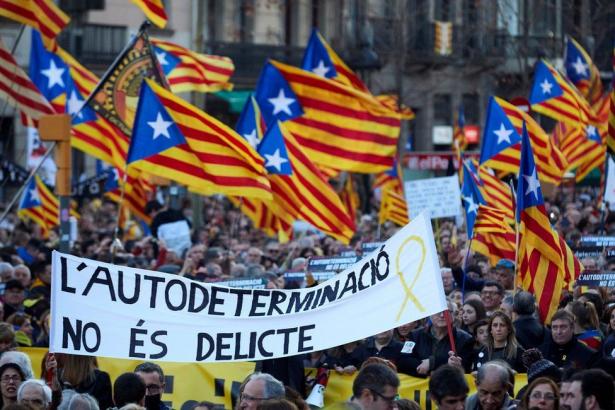 A banner reading "self-determination is not a crime" is waved by protesters in Barcelona. Credit, EPA

The Republican Left of Catalonia (ERC) and Together for Catalonia (Junts) reached an unexpected agreement for coalition government. Hammered out in two days of secret meetings between ERC national coordinator Pere Aragonès and jailed Junts national secretary Jordi Sànchez, the accord was ratified on May 19.

Back in 2007, the United Peoples Council for the Defence of the Río Verde was founded. More than 40 villages with Indigenous, Afro-Mexican, and Mestizo populations joined together to resist the half-dozen dam projects along the river. They connected with the nationwide Mexican Movement of Dam Victims in Defence of Rivers, as well as initiatives in Central America.

Last month’s elections in Scotland confirmed the position of the National Party. But what vision of an independent future are its supporters backing?

“Here, we heal the wounds of women. And we do it starting from what happened after the attack: women have taken up arms and have shown they can fight, overcoming old prejudices. We also fought in Raqqa, Syria, and we found some of our kidnapped women there. Today we are present all over Sinjar, in neighborhoods and villages.”

Mebyon Kernow – the self-proclaimed ‘Party for Cornwall’ at the forefront of the campaign for Cornish self-government –  defines itself as a ‘progressive left-of-centre’ party, with its central focus being on securing social justice and protection of the environment.

Indigenous communities will need time — to grieve, to process and to consider what should happen in the wake of devastating news that has resurfaced the trauma of Canada’s colonial legacy and genocide against Indigenous people.

Linke figure Sahra Wagenknecht and her allies believed that, to reverse the AfD’s electoral success, anti-Merkel and anti-migration politics could not be ceded to the far right. The rules of politics were changing, and “the center” would not hold.

Myanmar’s Spring Revolution is an inflection point in the country’s history. The old forces of domination and repression are still present, but it is providing new fissures, solidarities and potential for progressive change.

The farmers’ protests that have grown into a countrywide people’s movement took off from Punjab and later spread out to other states. But of late farmers in Haryana are taking on the Bharatiya Janata Party–Jannayak Janata Party government in a big way.