A deep look at how Palestinian women have practiced creative and often informal forms of everyday political activism and resistance. The reviewer considers the book among the finest social scientific works on contemporary Palestine in recent years. 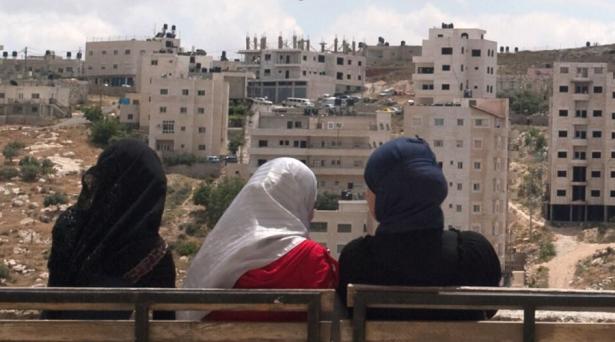 For writers on contemporary colonised Palestine, there are basic issues to address. First, the issue of positionality is fraught. If you are an ‘outsider’, colonial violence is forcibly present but always at one remove; this is crucial for situating claims made on the workings of power. Second, there is the question of framing. Life is not reducible to political formations, but nor is it divorced from political context. One thus cannot write about contemporary Palestine without addressing the brutal violence of Israel’s occupation; one should not over-determine Palestine as (passive) object of that violence. Third, accounts must speak with and through Palestinians. For a population in continual struggle for political visibility, it is imperative that authors do not replicate the silencing of already-marginalised voices.

At least by my reckoning, these issues are key for ethical and credible writing on contemporary Palestine. It is a matter of political urgency that writers pay careful attention to each and that representation itself affirms a potential for something other than the current and deleterious ‘status quo’ maintained by Israel and its security infrastructures.

Sophie Richter-Devroe’s Women’s Political Activism in Palestine: Peacebuilding, Resistance, and Survival not only engages but also advances these issues, placing them front and centre of a rigorous and lively text that does not relent in its critique but – just like its fully-formed protagonists – does not submit to the awesome power of the colonising force. Richter-Devroe’s prose portrays rounded characters who are agential, thoughtful political actors – ‘these women are not victims’ (1), we learn at the very outset.

This is reinforced from the quick-paced but carefully written introduction through the book’s three substantive chapters: the first focuses on women’s peacebuilding, and in particular the shortcomings of the liberal agenda for dialogue and empowerment. The second takes us to the alternatively stymied and rousing involvements of women in Palestinian popular resistance. The third moves into the ways that women live – every day – resistance through humour, relaxing, enjoying, negotiating, ‘getting by’ and remaining steadfast (sumud) even in the most oppressive political conditions. 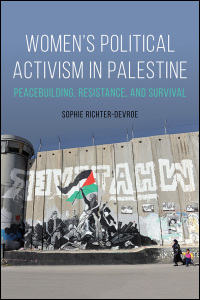 Women’s Political Activism in Palestine is remarkable for its attention to detail that is skilfully pitched to appeal both to readers with interests in women’s activism more generally and to those with a deeper regional knowledge specific to Palestine. This is evident in the thorough documentation of important governance contexts such as the UNSC Resolution 1325 (Chapter One) to the typology of political mobilising mechanisms (78-79) and the meticulous phenomenology of sumud (Chapter Three) that manages to reclaim something of its subtle anti-colonial dynamism. For scholars at different career stages, from student to professor, the text will prove a valuable resource for both teaching and research.

It is in the book’s third chapter – where the ‘infrapolitics of sumud’ are brought to the fore – that its most notable contributions lie. Sumud (most usually translated as ‘steadfastness’) has become something of a staid political concept in recent academic commentary on Palestine: its over-use can be the product of (often Western) scholars’ eagerness to tap into localised ideas, its romanticisation often betrays more than a hint of Orientalism and its commonplace glorification somewhat contradicts its subtlety.

But for Richter-Devroe the question of sumud is none of these things. It is instead addressed with and through her long-term Palestinian interlocutors, ones whose alternatively hopeful, angry and jovial agency is set in relation to (but not determined by) the ‘destruction, death, and frustration they are caught in’ (121). We thus come to know well-formed (pseudonymised) protagonists: Najla enjoys changes of scenery in different West Bank cities at weekends (118), Amal (somewhat unusually!) visits illegal Israeli settlements to relax (119) and Karima goes through the motions at peacebuilding events precisely so she can then visit the beach (121). These women’s activities and activism are at once courageous and mundane, and this is the tenor of resistance in the quotidian that forms the basis of the book’s main and convincing claims.

On the one level, as Richter-Devroe points out, this is a ‘tragicomedy’ in which Najla, Amal, Karima and other women included in the narrative see more than a little irony in their pursuits. On another level there’s some important political work going on here: mobilities are reclaimed, time becomes one’s own and space is re-made in an image other than that imposed by the coloniser. It is politically important, Richter-Devroe insists, that a Palestinian woman can re-purpose the tools of colonialism to the ends of sustaining her own agency.

The second struggle faced by Palestinian women (and women everywhere) is against patriarchal forms that can often complement and be accentuated by colonial impositions. Women’s Political Activism in Palestine does not shy away from this notoriously difficult question, documenting occasions when women’s resistance must be intersectional as they project voice into the masculinised discourses of Palestinian politics and refuse racialised liberal peacebuilding claims to ‘save local women’ (139). All adds up to a persuasive yet prudently cautious claim that we are witness to the emergence of ‘new provocative and hybrid female political subjectivities’ as part of ‘alternative subaltern counterpublics’ (88) in Palestine. The ‘personal is political’ is thus revitalised to (quietly) dismantle patriarchal and colonial forms alike.

There is hope, then. But given these emerging politics, and pushed to offer criticism: that Richter-Devroe persists so long in dialogue with Jürgen Habermas (and Nancy Fraser) without fully turning to writers more specifically focused on the point where women’s agency meets colonialism and patriarchy leaves questions to be further explored. How does Palestinian women’s activism move from ‘under Western eyes’? Can a ‘subaltern counterpublic’ prise itself from a colonial textuality? These questions, at least by my reading, are immanent to the cases at hand and left open for future research on the topic of women and colonialism.

This is more provocation than criticism, owed to a thought-provoking text that sits among the finest social scientific works on contemporary Palestine in recent years. It provides foundational lessons in writing as ‘outsider’; in portraying both colonial violence and the vibrancy of life; and in narrating alongside and through marginalised voices. Women’s Political Activism in Palestine presents a valuable contribution to the study of power in a context where anti-colonial movements – whether subtle or revolutionary – must be platformed and better understood towards the dismantling of Israel’s violent occupation.

Note: This review gives the views of the author, and not the position of the LSE Review of Books blog, or of the London School of Economics and Political Science.

Book author Sophie Richter-Devroe is an associate professor in the Middle Eastern Studies Department at Hamad Bin Khalifa University, Doha, and an honorary fellow at the European Centre for Palestine Studies at the University of Exeter. She is the coeditor of Gender, Governance, and International Security and of a special issue of South Atlantic Quarterly, "Palestine beyond National Frames: Emerging Politics, Cultures and Claims."

[Essayist Mark Griffiths is a political geographer in the School of Geography, Politics and Sociology at Newcastle University. He writes on the themes of geographical ethics and political geographies of Palestine. His recent work is published in the journals Transactions of the Institute of British Geographers, Antipode, Security Dialogue and Gender, Place and Culture.]