What’s Behind Ireland’s Support for Palestine?

Dublin may lie 4,000km (2,485 miles) from Jerusalem on the map, but in the Irish political imagination, Palestine feels much closer, with both perceived as sharing a history of struggle against colonialism and oppression. 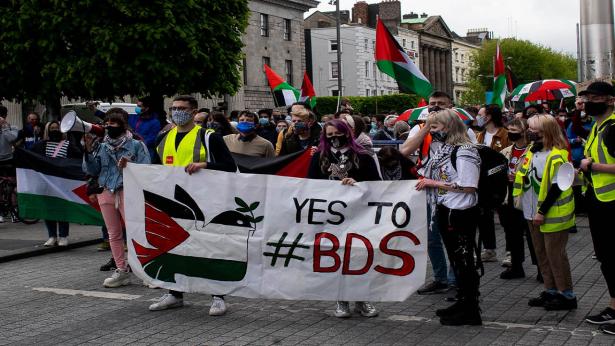 After Abraham Aljamal Phelan moved to Dublin in the late 1980s, many customers at his grocery store, where the shelves were adorned with fresh figs and olives, were up to date with the latest news from his native Palestine.

During their exchanges about food, culture and history, his stories of home found sympathetic ears.

“They relate to what’s going on, for what we are going through, they relate to it in Ireland because of their history,” he told Al Jazeera.

Dublin may lie 4,000km (2,485 miles) from Jerusalem on the map, but in the Irish political imagination, Palestine feels much closer, with both perceived as sharing a history of struggle against colonialism and oppression.

The following day, the Irish flag was hoisted above Ramallah’s city hall, a video of which spread quickly on social media, shared by many of Aljamal Phelan’s loved ones in Jerusalem.

Coming soon after the worst outbreak of Israel-Hamas violence in years, in which at least 254 Palestinians in Gaza and 12 people in Israel were killed, it was a welcome sight to many.

“I think the Palestinians are delighted, absolutely delighted to see a friend like Ireland, somebody standing by them,” he said. “Because we are left out to dry by the whole world. Everybody is ignoring us.”

From the hillside village of Beit Surik, just north of Jerusalem, his family have witnessed first-hand how Israel has deepened its control over the occupied territories.

His elder brother was shot dead at 17 by the Israeli army while walking with his family during the 1967 war, and much of the family land has since been taken for settlement and its water source diverted.

Today a border wall ruled illegal by the International Court of Justice separates his family from their olive groves.

Another brother has been shot at by Israeli settlers and his nephew, who suffers from leukaemia, has faced gruelling delays at army checkpoints to visit a nearby hospital for treatment.

John Boyne, foreign affairs speaker for the opposition, left-wing Sinn Fein party, who tabled the recent motion, told Al Jazeera that the move was a direct consequence of Israel’s actions and an expression of the common bonds between Irish and Palestinian sufferings.

But his party wants to go further.

“The time has gone for words of condemnation. Now is the time to take decisive action against a lawbreaker that presides over an apartheid system,” he said.

‘Deep understanding for what it means to be Palestinian’

The Irish Parliament captured international attention in 2018 when it passed the Occupied Territories Bill, which would have banned all goods and services originating in illegal settlements in the West Bank.

Though it had broad support across political parties and the general public, it was shot down during coalition negotiations between the two governing conservative parties.

For Amir Abualrob, a theatre artist, actor and LGBTQ activist, who came to Ireland from the West Bank town of Jenin three years ago, identification with the Palestinian cause has deep roots in Irish society.

“I see flags everywhere I go of my country, and I’m so proud walking in Ireland because I’m Palestinian, wherein another place it would be something else,” he told Al Jazeera.

In the late 19th and early 20th century, the picture was very different.

Irish republicans found common cause with Zionists, recognising each other as fellow persecuted and dispossessed peoples.

Returning from Russia on a trip to investigate a deadly pogrom in Kishinev, Irish republican leader Michael Davitt proclaimed in 1906 he was “a convinced believer in the remedy of Zionism”.

Decades later, during their fight against British rule in Mandatory Palestine, Zionist paramilitary and armed groups such as the Irgun and Lehi closely studied the guerrilla tactics used during the Irish war of independence.

But Irish sympathy ran dry when the Zionists accepted the 1937 British plan to partition Palestine and create a Jewish state.

At the League of Nations, Prime Minister Eamonn De Valera denounced the carve-up as cruel and unjust, a bitter repetition of Ireland’s own division by the British 15 years earlier.

“Irish political opinion saw the evolution of its attitude towards Zionism very much through the prism of the British. If the Zionists and the British are on the same side of partition then, ‘We can’t support the Zionists’,” said Rory Miller, professor of government at Georgetown University in Qatar.

There was still considerable support for Israel in Ireland by the time of the 1967 war, but growing awareness of the fate of Palestinian refugees, alongside the work of Irish charities, and civil rights groups in Palestine, began to shift public opinion.

“Organised, mobilised activism on behalf of the Palestinians is absolutely – relative in per capita terms – higher in Ireland than it is in Britain or Germany, or many, many EU countries,” said Miller.

The deaths of a number of Irish soldiers at the hands of Israel and its proxy forces were among the reasons Dublin did not open an Israeli embassy until 1993.

Ireland was the first member of the European community to recognise the Palestinian Liberation Organization in 1980, with others following a few months later, and became a stalwart advocate for the two-state solution, hosting and meeting with Yasser Arafat on several occasions, sometimes to the ire of the Israeli government.

Like many Palestinians, Aljamal Phelan is critical of Arafat, but understood his power as a symbol.

“There was a great reception for him [in Dublin]. He was treated as a  freedom fighter,” he said.

Though Ireland has never broken with EU foreign policy and still officially supports the two-state solution set out in the Oslo Accords, leaders from across the Irish political spectrum have sharply criticised Israel’s settlement policy, breaches of human rights and undermining of the peace process.

Their criticism has only grown as the two-state solution appears increasingly doomed and as the EU has become preoccupied with other foreign policy issues.

The result has been an often fractious diplomatic relationship with Israel.

Its foreign ministry described last week’s motion as “one-sided”, and in 2018 blasted the Occupied Territories Bill as “the most extreme anti-Israel piece of legislation in Europe”.

Ireland is unlikely to be an important player on the international stage, but Sinn Fein’s Boyne believes that the Irish government can use its influence within the EU and the United Nations, where it currently sits on the Security Council, to convince other states that annexation is a reality and that Israel must face consequences for violating the rights of Palestinians.

“It is now time for the EU,” he said. “It’s time for other countries around the world to take that stand against the apartheid system that Israel perpetrates.

“We hope that we have set a course for other countries to follow suit.”