Yes, We Should Still Defund the Police

A social safety net does a better job of achieving a more harmonious society than thousands of assault weapons and armored vehicles. Police reduction should become the American way. 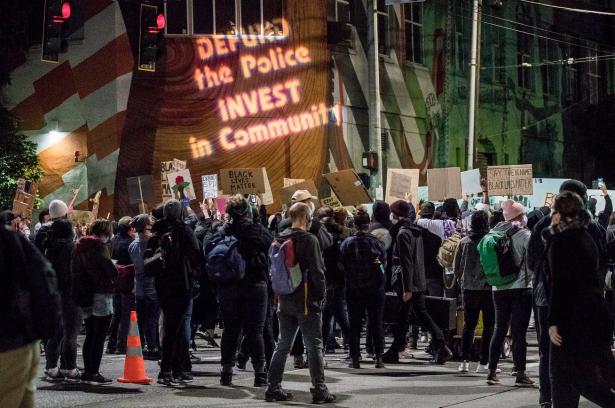 Protesters gather in Seattle, Washington, to demand the defunding of the city's police department.,

Millions of people have celebrated former Minneapolis police officer Derek Chauvin’s conviction for the murder of George Floyd as a validation of the Black Lives Matter movement. It is a major step along the way to police reform.

Yet we should not be satisfied with anything less than total reform, including a full reappraisal of the mandate of law enforcement. And most of these necessary changes have been summed up under the rallying cry of “Defund the Police.”

I know that this phrase has been both dismissed by jittery politicians on the left and seized on by those on the right to generate fear around progressive politics. I have seen a Facebook meme warning “Don’t say ‘Defund the Police.’ ”

“Defund the police” isn’t about attacking cops. It isn’t about letting criminals run rampant. It’s about getting the United States out of a “cops and robbers” mentality that simplifies crime to the “good guys” and “bad guys.” It’s about looking realistically at the social forces that contribute to making America unsafe, and having the courage to correct them.

Most of all, it is about embracing the most effective method of crime stopping — redirecting troubled lives before they turn to law-breaking. It recognizes the roots of crime in unconscionable levels of deprivation in underserved neighborhoods.

Opposition to defunding the police stems from the presumption, reinforced by countless television shows, that policing stymies violence and property crimes. This presumption is, in reality, highly questionable.

Between 1997 and 2016, violent crime rates in the United States dropped by a significant 37%, even as the number of police officers per 100,000 residents fell from 242 to 217, according to an analysis by USA Today and the Marshall Project. Perhaps this owed to a reduction in the daily hostilities with the police in underserved communities.

Crime rates, it’s true, have risen during the pandemic. But more police, argues historian Elizabeth Hinton in her new book, “America on Fire,” usually leads to more police violence. She quotes James Baldwin, who likened the presence of police in minority communities to “an occupying soldier in a bitterly hostile country.”

Policing in the United States is militarized and astronomically expensive. Local governments collectively spend more than $100 billion a year on police. This investment is a serious drain on resources that could be spent on housing, health care, education and jobs.

Middle-class Americans often don’t appreciate what policing looks like in poor communities, who often feel that it exists to stigmatize them. In fact, 95% of all arrests are for such offenses as traffic violations, marijuana possession, unlawful assembly, or “crimes” like removing a shopping cart from grocery store premises.

Let’s try something different. We must stop excessively penalizing marijuana possession, stop penalizing the poor (often for doing what they have to do to survive) and rebuild society in ways that make petty crimes unnecessary.

The way that policing is practiced today exacerbates social divisions along the lines of race, class, and gender, creating systemic oppression which proves difficult to root out without reimagining the system entirely. Western European countries have lower levels of crime compared to the United States, because they pour money into social resources (and have more sensible gun laws).

A social safety net does a better job of achieving a more harmonious society than thousands of assault weapons and armored vehicles. Police reduction should become the American way.

Darryl Lorenzo Wellington is a writer living in Santa Fe, New Mexico, and a communications fellow at Community Change.

The Progressive has been on the frontlines—advocating for peace, gender and racial equity, fair labor practices, environmental safeguards, and keeping elected officials and corporations in check. We don’t rely on the billionaire class to fund the type of hard-hitting journalism we set out to do.  Rather, we depend on people like you. Reader support makes up more than half of our budget, Your support allows us to dig deep on the stories that matter most. Donate:  https://progressive.org/about-us/Support