labor Know Your Enemy: How to Defeat Capitalism

But why does the capitalist want to hire workers? Because by doing so, he gains control over the worker’s capacity in the workplace. 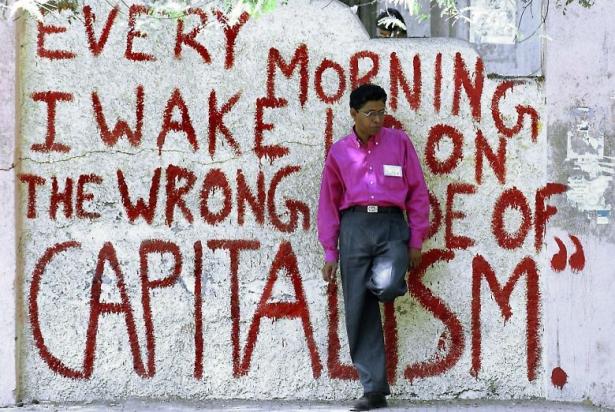 In a capitalist society, there is always a good explanation for your poverty, your meaningless job (if you have a job), your difficulties and your general unhappiness. You are to blame. It is your failure. After all, look at other people who do succeed. If only you had worked a little harder, studied a little more, made those sacrifices.

We are told that anybody who works hard can become a success. Anyone can save up and become your own boss, a boss with employees. And there is some truth to this. Often, any one person can do these things — but we can’t conclude from this that every person can. It is a basic fallacy to conclude that because one person can do something, therefore everyone can. One person can see better in the theater if he stands, but if everyone stands no one can see better. Anyone can get the last seat on the plane, but everyone can’t. Any country can cut its costs and become more competitive, but every country cannot become more competitive by cutting costs.

The lessons they want you to learn

So, what does this focus upon the individual tell you? It tells you that it’s your own fault, that you are your own worst enemy. But maybe you don’t accept that. Maybe what’s holding you back is those other people. The problem is those people of color, the immigrants, indeed everyone willing to work for less who is taking a job away from you. They are the enemy because they compete with you. They’re the ones who force you to take a job for much less than you deserve, if you are to get a job at all.

Think about what’s known as “The Prisoners’ Dilemma”. Two people have been arrested for a crime, and each is separately made an offer: if you confess and the other prisoner doesn’t, you will get a very short sentence. But if the other confesses and you don’t, you will be in jail for a long time. So, each separately decides to confess. That’s a lot like your situation. The Workers’ Dilemma is: do I take the low wage job with little security or do I stay unemployed? “If everything were left to isolated, individual bargaining,” argued the General Council of the International Workingman’s Association (in which Karl Marx was a central figure), competition would, if unchecked, “reduce the producers of all wealth to a starvation level.” Of course, if the prisoners were able to cooperate, they would be much better off. And so are workers.

Immigrants, people of color, people in other countries are not inherently enemies. The other prisoners are not the enemy. Something, though, wants you to see each other as enemies. That something is the prison — the structure in which we all exist. That is the enemy: capitalism.

The separation of workers in capitalism is not an accident. Capitalism, which emerged historically in a time of slavery, extermination of indigenous peoples and patriarchy, has always searched actively for ways to prevent workers from cooperating and combining. How better than to foster differences (real and imagined) such as race, ethnicity, nation and gender, and to convert difference into antagonism! Marx certainly understood how capital thrives upon divisions within the working class. That, he argued, is the secret of capital’s rule. Describing the antagonism in England at the time between English and Irish workers, he explained that this was the secret of the weakness of the English working class — “the secret by which the capitalist class maintains its power. And that class is fully aware of it.” It’s not hard to imagine what he would have said about antagonisms between white and Black workers in the United States; further, the effect of divisions between workers in different countries should not be a secret for workers.

To understand why separation of workers is so central for capitalists, we need to consider the characteristics of capitalism.

All production begins with “the original sources of all wealth” — human beings and Nature, according to Marx. Production is a process of activity (labor) involving the use of the products of past labor (means of production, including that drawn directly from Nature) to achieve a particular purpose envisioned at the outset. But production under capitalist relations has particular characteristics. By considering the relation between the capitalist class and the working class, we can analyze it as a system and show the connection between many patterns.

Capitalist relations of production are characterized by the relation between the side of capitalists and the side of workers. On the one hand, there are capitalists — the owners of wealth, the owners of the physical and material means of production. Their orientation is toward the growth of their wealth. Beginning with capital of a certain value in the form of money, capitalists purchase commodities with the goal of gaining more money, additional value, surplus value. And that’s the point: profits. As capitalists, all that matters for them is the growth of their capital.

On the other hand, we have workers — people who have neither material goods they can sell nor the material means of producing the things they need for themselves. Without those means of production, they can’t produce commodities to sell in the market to exchange. So, how do they get the things they need? By selling the only thing they do have available to sell, their ability to work. They can sell it to whomever they choose, but they cannot choose whether or not to sell their power to perform labor … if they are to survive. In short, workers need money to buy the things they need to maintain themselves and their families.

The logic of capital

But why does the capitalist want to hire workers? Because by doing so, he gains control over the worker’s capacity in the workplace. Marx commented that once the worker agrees to sell his capacity to the capitalist, “he who was previously the money-owner now strides out in front as a capitalist; the possessor of labor-power follows as his worker.” Through his command over the worker, the capitalist is able to compel the extraction of more labor from the worker’s capacity than the labor he is paying for; or stated another way, he can get more value from the employment of the worker than he pays in the form of wages. A coercive relationship of “supremacy and subordination” of capital over workers is the basis for exploitation — surplus labor and surplus value.

Since the capitalist’s goal is the growth of his wealth, he is always searching for ways to achieve this. Nothing is fixed for him. So, he can try to increase exploitation of the worker by extracting more labor from her — for example, by extending the workday. Similarly, the pores of the given workday, when the worker pauses or takes a bathroom break, are a waste for the capitalist, so he does what he can to intensify the pace of work (“speed-up”). Every moment workers rest is time they are not working for capital.

Further, for workers to be able to rest away from work allows capital more room to intensify the pace of work. The existence of unpaid labor within the household reduces the amount of the wage that must be spent upon necessities and facilitates the driving down of the wage. In this way, capitalism supports the maintenance of patriarchy and exploitation within the household.

Both by intensification of work and by driving wages downward, surplus labor and surplus value are increased. Accordingly, it’s easy to understand why Marx commented that “the capitalist [is] constantly tending to reduce wages to their physical minimum and extend the working day to its physical maximum.” He continued, however, saying “while the working man constantly presses in the opposite direction.”

In other words, within the framework of capitalist relations, while capital pushes to increase the workday, both in length and intensity, and to drive down wages, workers struggle to reduce the workday and increase wages. Just as there is struggle from the side of capital, so also is there class struggle from the side of the worker. Why? Take the struggle over the workday, for example. Why do the workers want more time for themselves? Time, Marx noted, is “the room of human development. A man who has no free time to dispose of, whose whole lifetime, apart from the mere physical interruptions by sleep, meals, and so forth, is absorbed by his labor for the capitalist, is less than a beast of burden.” And the same is true if all your energy is consumed by the pace of work so that all you can do is collapse at home.

What about the struggle for higher wages? Of course, workers have physical requirements to survive that must be obtained. But they need much more than this. The worker’s social needs, Marx commented at the time, include “the worker’s participation in the higher, even cultural satisfactions, the agitation for his own interests, newspaper subscriptions, attending lectures, educating his children, developing his taste, etc.” Of course, our social needs now are different. We live in society and our needs are formed by that. While we struggle to satisfy those needs through higher wages, capital resists because it means lower profits.

What determines the outcome of this struggle between the capitalist and worker? We already have seen what determines the relative power of the combatants — the degree of separation of workers. The more workers are separated and competing against each other, the longer and more intense the workday and the lower the wages they get. In particular, the more unemployment there is, the more workers find themselves competing for part-time and precarious work in order to survive.

Remember, though, that Marx pointed out that “the working man constantly presses in the opposite direction.” Workers press in the opposite direction to capital by struggling to reduce the separation among them. For workers in capitalism to make gains in terms of their workdays, their wages and their ability to satisfy their needs, they need to unite against capital; they need to overcome their divisions and competition among workers. That was and is the point of trade unions — to strengthen workers in their struggle within capitalism.

Of course, capital doesn’t bow down and give up when workers organize. It does everything it can to weaken and evade trade unions. How does capital respond? By using racism and sexism to divide workers. It brings in people to compete for work by working for less — for example, immigrants, impoverished people from the countryside. It subcontracts and outsources so organized workers can be replaced. It uses the state — its state — to regulate, outlaw and destroy unions. It shuts down operations and moves to parts of the world where people are poor and unions are banned. Even threatening to shut down and move is a powerful weapon because of the fear that workers have of losing their jobs. All this is logical from the perspective of capital. The logic of capital is to do everything possible to pit workers against each other because that increases the rate of exploitation.