The Tokyo Olympics Are In Peril

The masses of Tokyo want to postpone or cancel the games, but the government says it’s the IOC’s decision, not the host country’s. If the Olympics go on, it will be the ultimate negation of its alleged purpose: profit trumping the joy of sport. 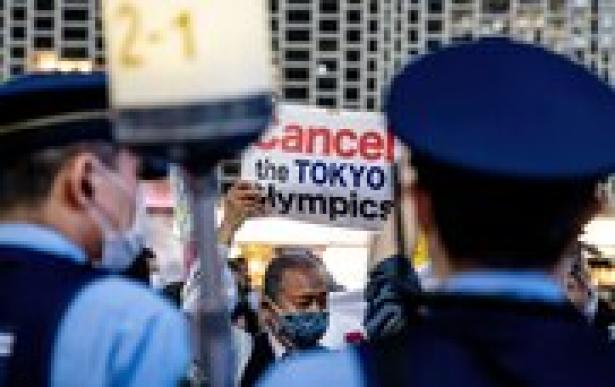 Ten thousand people. That’s how many Olympic volunteers quit their posts in Tokyo, with the games just 50 days away. That is one of every eight volunteers needed to pull off the 2021 (still called the 2020) Olympics. This is just the latest warning sign that, despite the Panglossian protestations of the International Olympic Committee, this summer’s Games are in peril. Japan is currently wrestling with a coronavirus upsurge and less than 3 percent of the population is vaccinated. According to polls, as much as 80 percent of the country does not want to host the games, for fear of it exacerbating this omnipresent public health crisis, currently classified as a state of emergency.

The masses of Tokyo want to postpone or cancel the games, but the government says it’s the IOC’s decision, not the host country’s, sovereignty be damned. In a, pardon the expression, viral editorial, Japanese Olympic Committee member and one-time bronze medalist Kaori Yamaguchi wrote that Japan has been “cornered” into having to host the games. She wrote, “We have been cornered into a situation where we cannot even stop now. We are damned if we do, and damned if we do not…. The IOC also seems to think that public opinion in Japan is not important.” It was an extraordinary statement that broke a wall of blithe arrogance from the JOC in the face of this public opposition.

In a sane world, the Olympics would have already been postponed. But money has trumped all other concerns, and that’s what Yamaguchi is referring to when she says the country is “damned if we do, and damned if we don’t.” Japan has officially spent $15.4 billion on the games, but government audits reveal that the actual cost could be as high as $30 billion and climbing. At least a portion of that lucre needs to be recouped, and it won’t be if the gleaming new facilities are shuttered.

For the IOC, the pressure to televise something they can call the Olympics is a matter of survival. The committee receives 75 percent of its budget from Olympic television rights and is already hurting from last year’s postponement, which was instituted against its will. If these Olympics are postponed again or—heaven forfend—canceled, the IOC stands to lose, according to the Associated Press, between $3 billion and $4 billion. If the Olympics go on, it will be the ultimate negation of its alleged purpose: profit trumping the joy of sport.

Examples of this abound in Olympic history. As recently as the last Olympics in Rio, I saw communities destroyed in the shadows of newly built stadiums that now stand empty. But putting on a global Olympics in what is effectively an unvaccinated country in order to recoup billions is a special kind of obscene. The IOC counters this argument by pointing out that fans from abroad are already banned. A decision is expected by June 20 as to whether fans from the host country will be allowed to attend (it is expected that they also will be prohibited). Yet this unprecedented decision to almost certainly hold an Olympics without fans, kind of gives the game away. If the Olympics are not safe for the public, what about the athletes, coaches, trainers, announcers, camera crews, and all assorted support staff? We are still talking about tens of thousands of people from 200 nations and territories, some from countries with meager vaccine rollouts. Also, the absence of global tourists makes the $30 billion investment of the Japanese public and attendant sponsors all the more wasteful at a time when resources are precious.

Japanese government medical adviser Dr. Shigeru Omi, has testified to parliament that “holding the games in the middle of the pandemic is abnormal.” He also said that if the country is still in a state of emergency, the games “should be avoided.” This is ratcheting up pressure on Prime Minister Yoshihide Suga to take a stand. But he is passing the buck, parroting the line that the IOC holds all the cards as to a postponement or cancelation. The IOC is certainly strutting as if it does. Senior IOC member Dick Pound this past week that it would take “Armageddon” to stop the games. There may not be Armageddon before the games, but if they steamroll ahead, the aftermath certainly could bear a close approximation.

Dave Zirin is the author of the book: "Welcome to the Terrordome: The Pain, Politics and Promise of Sports" (Haymarket). You can receive his column Edge of Sports, every week by going to dave@edgeofsports.com.
Become an Edge of Sports Sustainer (Click Here)