Thirty Years Ago, the Beginning of the End of the Yugoslav Federation

The wars behind the breakup of Ygoslavia left hundreds of thousands of victims. Tribunals have blamed only local criminals, but not international ones—as they probably never will. Because here too, the truth was the first victim of the internal war. 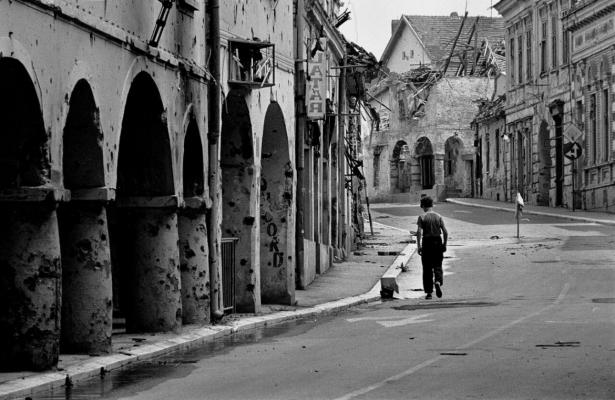 June 25, 1991 is a memorable date. Starting on that inauspicious day, with the proclamation of independence of Slovenia and Croatia from the Yugoslav Federation—which still had a seat at the UN and a unified army—the bloody abyss of the Yugoslav inter-ethnic war opened up. It is a date that changed the world’s agenda. The Nineties had begun, the crisis in the USSR precipitated, the conflict in Iraq began, and the reunification of Germany started after the fall of the Wall. And war returned to the Old Continent, to south-eastern Europe, the strategic bridge of confrontation and encounter with the East.

Now that people are beginning to recognize what il manifesto already denounced at the time, it is worth recounting the decisive developments.

The Yugoslav Federation was a highly original historical-political structure, in part due to the extraordinary history of the mass partisan movement that had liberated the country from Nazi-Fascist occupation and from the regimes and local forces linked to it. Under Tito’s leadership, the country had been in equilibrium during the Cold War; since the break with Stalin in 1948, it had built up an international position by promoting the Non-Aligned Movement; internally, it had launched a form of representative democracy, with localized rule, although still with a single party, which was rather popular and participatory.

The thorn in the side of the project remained the different economic weights, often poorly distributed, of the countries making up the Federation. For this reason, in 1974, after a unification under the constitutional aegis of the Socialist republic, Tito and Kardely had made substantial federal-level changes to the autonomy of the six republics (Slovenia, Croatia, Macedonia, Bosnia-Herzegovina, Montenegro, Serbia, plus two autonomous regions bundled with Serbia, Kosovo with an Albanian majority and Vojvodina with a strong presence of a population of Hungarian origin). After the death of Tito in 1980, the country experienced strong economic turmoil, and it had recourse to the International Monetary Fund, which would soon ask for its money back; austerity measures were adopted, and starting in 1985, widespread social protests and conflicts in the production sectors started (see the case of Agrokomerc for a paradigmatic example).

This climate could not fail to have an impact on the Yugoslavian party structure, the League of Communists, and on the new constitutional structure, as one of its articles established the right to veto federal-level decisions for each component republic.

That’s how a phenomenon took root in the Balkans which was a foreshadowing antecedent of future history, not just an isolated incident in the past. It’s the same one that has characterized the crisis of the European Union recently: division due to the economic and social crisis. Faced with the problems of their state budget, the “richest” regions, such as Slovenia, vetoed the sharing of the costs of the crisis with the poorest regions (Montenegro, Kosovo, Macedonia—the latter being the only one to remain out of the conflict, thanks to an agreement between Milosevic and Kiro Gligorov, at least until the internal civil war between Albanians and Slovenian-Macedonians).

The political expression of this breakdown of the original bond of solidarity, of “brotherhood and unity,” was the first multi-party elections of 1990, with the emergence of nationalist and pro-independence parties everywhere—in Croatia, the strength of the neo-Ustashe movements became evident also thanks to massive Western funding brought in in the name of “democracy.” In Serbia, in the face of the first crisis that exploded in Kosovo with social protests and miners’ strikes, Slobodan Milosevic put up his smoke and mirrors, the emerging leader of the League that rode the wave of resurgent Serbian nationalism in an unscrupulous and irresponsible manner.

At the same time, the European Union was being born. Maastricht was far in the future, but the fear of the explosive crisis of the USSR committed the European countries to an important choice: the Badinter Commission decided that proclamations of independence made unilaterally, by violence and in contempt of the democratic process, should not be recognized. But on June 25, 1991, Europe did the opposite of what it had decided: it recognized—with the Germany of Kohl and Genscher being the first, together with the Vatican, led by the Polish Pope Wojtyla—the independence of Slovenia and Croatia, which had declared themselves independent on the basis of ethnic values: “Slovenia is the homeland of the Slovenes” and “Croatia is the homeland of the Croats,” declared the first constitutions of the new states.

Gradually, all the other states of the new European Union recognized this independence on an ethnic basis, without wondering what was going to happen to the non-Slovene and non-Croatian populations in ethnically pure states. The result was that the proclamations of the Serbs in Croatia, Baranja and Krajina began. And this opened the chasm of what would be the conflict in Bosnia and Herzegovina, where all ethnicities and religions were represented.

That’s how it was. As in a mirror image, the European Union was born out of the destruction of the Yugoslav Federation.

All came about through a war in which it’s not true that we “didn’t intervene,” or were too late. It’s one whose outbreak we favored, and for which we are co-responsible, together with the internal nationalist movements. It’s a heavy responsibility, with hundreds of thousands of victims, of massacres, ethnic cleansing, the siege of Sarajevo, violence against women, all crimes for which ad hoc Tribunals have blamed only local criminals, but not international ones—as they probably never will. Because here too, the truth was the first victim of the internal war.

Could it have been handled differently? And how? Faced with a Yugoslavia that included 19 nationalities, at least three religions (Orthodox Christian, Muslim and Catholic) and four languages, but in which, at the first census in 1981, millions of people declared themselves to be “Yugoslav” only, it would have been necessary to act wisely and say that the area would only join the EU if it kept its unity.

But the nascent Europe—against the open disagreement of the United States at the time—did the opposite: it made it clear, with the recognition of independence on an ethnic basis, that Yugoslavia would join it in pieces, and, indeed, that it could only join if divided. Even worse, every European state began to support one republic against another (e.g. Germany sided with Slovenia and Croatia, France with Serbia, etc.). Divide and rule, in short. So we can say that the unitary construction of the EU was built on the destruction of the Yugoslav Federation.

It was a nefarious all-European plan. At that time, the U.S. Secretary of State, the Republican James Baker, and the great envoy Cyrus Vance, were worrying about the collapse of a pivotal country in the balance with the East, which had been an ally of the West throughout the Cold War, and they tried to fight the trend until the end. But afterwards, with the Clinton presidency, everything changed, and the U.S. became the sponsor of all the conflicts in the field, even creating an opening in Bosnia for the arrival of mujahedin from Afghanistan, and there were repeated NATO interventions that finally found an opportunity to play a leading role, until the theoretical Dayton peace at the end of 1995, which was nothing more than a division on an ethnic basis.

The current picture of the small states born from the bloody other-led self-determination of the Yugoslav Federation tells us that none of these countries has a future alone. Slovenia, an EU member, does not have a future with the leader Janez Jansa, a former dissident from Mladina and leader of the militias that mercilessly attacked groups of Yugoslav conscripts, and who is now linked to Orban and is being called a “dictator” by the protesters in the streets.

The conflicts over the borders between the statelets are still there (the Gulf of Piran is disputed between Ljubljana and Zagreb). The Bosnian crisis, always in the background of the partition, is reopening. The Albanian question in the area remains unresolved, including in the new entity of North Macedonia. The solitude of Serbia remains dangerous, and Kosovo is hardly much of a state.

But all, or almost all of them have shiny new defense budgets: after tiny Montenegro, they are all now in NATO or being eyed by it. Should we call this “the expansion of liberal democracy”?