A lot of questions remain about Congress' path forward to repeal military authorizations that empowered presidents to put boots on the ground and conduct airstrikes. Here's what we know.

July 11, 2021 Andrew Desiderio Politico
Printer friendly
Why Congress Is Finally Starting to Claw Back its War Powers from the President Published July 11, 2021 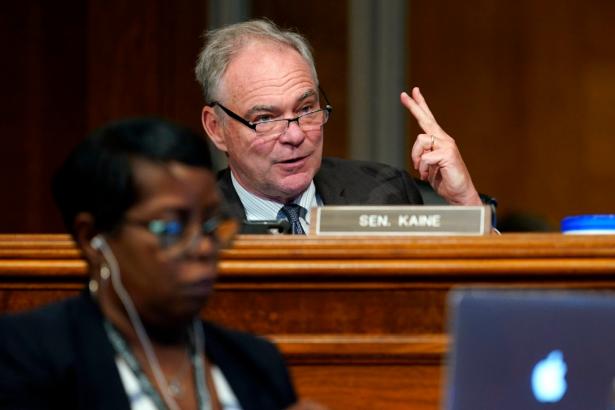 Sen. Tim Kaine (D-Va.), pictured, and Sen. Todd Young (R-Ind.) are sponsoring a bipartisan bill that would repeal the 2002 and 1991 AUMFs in tandem. , Susan Walsh/AP Photo

Congress is taking unprecedented action this year to clean up a mess largely of its own making: the expanded war powers that presidents of both parties have seized in the post-9/11 era.

The Senate and House are moving to repeal outdated authorizations for the use of military force that are often ripe for abuse by the executive branch. Often abbreviated as AUMFs, those authorizations have undergirded U.S. military operations in the Middle East for the better part of the last 30 years, giving presidents wide and mostly unchallenged legal authority to put boots on the ground, conduct airstrikes and more.

For years, lawmakers who pushed to rein in presidential war powers were relegated to the fringes, and the idea was slammed as a fantasy of the progressive left. Today, as the nation grows weary of so-called forever wars, the concept has near-unanimous support in the Democratic Party and buy-in from a significant cohort of Republicans — giving Congress its best chance in a generation to re-assert its authority over matters of war and peace.

But even with President Joe Biden coming out in support of repealing past authorizations and re-tailoring others, on top of commitments from both Senate and House leadership, scrapping the AUMFs will be a complicated affair. It underscores the limits of Congress’ power and raises important questions about what authorities a president should retain to defend Americans in harm’s way and retaliate against enemy strikes.

The flurry of activity on Capitol Hill also comes amid growing uncertainty surrounding the U.S. presence in the Middle East after all American troops are withdrawn from Afghanistan later this summer — and how Biden plans to handle the increasing spate of attacks from Iran-backed militia groups in other parts of the region.

What is Congress doing now to repeal old AUMFs?

The House already repealed AUMFs passed in 1957, 1991 and 2002 — with the latter representing a particularly crucial goal for activists, since it authorized the initial post-9/11 invasion of Iraq. And the Senate is on track to scrap the 1991 and 2002 authorizations, a process that is slated to begin when the chamber returns to session next week.

The House took definitive action last month, first voting to repeal the 2002 AUMF and later scrapping the 1991 and 1957 AUMFs. Those efforts have been led by Rep. Barbara Lee (D-Calif.).

The 1991 measure was approved in the run-up to the first Gulf War, and the 1957 one was signed into law by President Dwight D. Eisenhower to prevent the spread of Soviet communism in the Middle East, but it was never formally invoked. Neither serves a practical purpose today; and most lawmakers view the 2002 AUMF the same way, since the Iraq War has been over for a decade now.

In the House, 49 Republicans and all but one Democrat backed the 2002 repeal; the 1991 and 1957 measures were voted off the books with a resounding 366-46 vote as part of a package of other foreign-policy bills.

On the other side of the Capitol, the path forward is more tangled.

Senate Majority Leader Chuck Schumer has vowed to put a bipartisan bill on the floor that would repeal the 2002 and 1991 AUMFs in tandem, and the Foreign Relations Committee is slated to take up the legislation when the Senate returns to Washington next week. It’s sponsored by Sens. Tim Kaine (D-Va.) and Todd Young (R-Ind.).

A group of GOP senators had pushed to delay the markup — which was initially scheduled to take place last month — until after committee members received a briefing from top Biden administration officials about the operational impact of repealing the AUMFs. Chair Bob Menendez (D-N.J.) granted the Republicans’ request, and the briefing is expected to take place next week.

“I talked to a few of them who wrote the letter and they said, ‘Hey, I very well might vote with you on this, but I just want to hear from the White House,’” Kaine said. 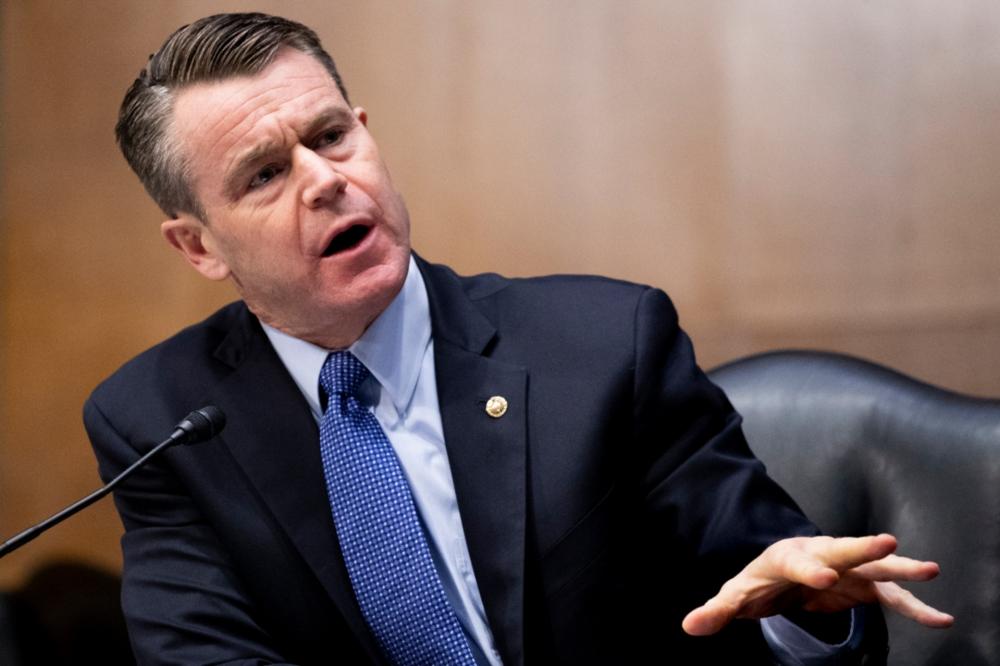 What do Republicans want?

Most Republicans have already staked out their opposition to scrapping the 2002 AUMF, contending that it would unnecessarily hamstring the commander-in-chief and would send a bad signal to terror groups looking to gain a foothold in the region. It would also embolden Iran, they argue.

Accordingly, Republicans are planning to complicate matters in the Senate committee markup. Sen. Ted Cruz (R-Texas) said in an interview that while Congress has been “far too lax” in ceding war authorities to presidents over the years, he plans to introduce an amendment that would preserve Biden’s authority to take military action against Iran — both to protect Americans in the region and to prevent Tehran from acquiring a nuclear weapon.

As they push for a harder line against Iran, Republicans have pointed to former President Donald Trump’s decision to order an airstrike that killed a top Iranian general. Democrats opposed that move at the time for fear that it would prompt a protracted war.

“If it’s framed and argued as some kind of resolution to restrain America’s ability to take action against the Iranian regime as its principal focus … you’re gonna not get a lot of Republicans to support it,” Sen. Dan Sullivan, an Armed Services Committee member, said in an interview. The Alaska Republican made a similar pitch to his colleagues at a party lunch last week.

That approach won’t fly with Democrats, said Kaine, who predicted that Cruz’s amendment will fail: “If he wants to do something with Iran, he’s got to bring a separate authorization bill on that.”

Despite the GOP efforts, the Foreign Relations Committee is expected to approve the Kaine-Young bill next week. It will then head to the Senate floor, where it needs support from at least 10 Republicans to overcome a filibuster; several GOP senators have already signed onto the effort, and Democrats are cautiously optimistic that they’ll get enough support from across the aisle.

If the Senate repeals the AUMFs, what comes next?

Since the House and Senate will have passed separate bills for the various AUMF repeals, Democratic leaders in both chambers will have to decide whether to reconcile the two approaches through a conference committee or slip the measures into the annual defense policy bill, considered a must-pass.

Kaine told POLITICO that the defense bill is the most likely path for their efforts to be signed into law. Lee, the top House negotiator, has not stated her preference, though she has spoken with Kaine on the matter.

What does Biden want to do?

Proponents of reforming presidential war powers got a major boost when Biden earlier this year came out in favor of replacing the open-ended 2001 AUMF with one that is more tailored to the current threats in the region. That authorization was adopted in the days following the Sept. 11 attacks and effectively gave successive presidents a blank check to go after the terrorist groups responsible.

Replacing the 2001 AUMF will be extremely difficult, even with an amenable White House, as GOP hawks warn against moves that would prevent the U.S. from attacking Iran. Also, Biden risks giving away too much of his authority to Congress in the event of a significant escalation in the region, especially since he has already backed repealing the 2002 AUMF.

Some Democrats worry that Biden is relying too heavily on the powers granted to him by Article II of the Constitution as a substitute for AUMFs. Even as the president backs congressional efforts to scale back his war powers, he has increasingly relied on his Article II authority to conduct airstrikes against Iran-backed militant groups in Iraq and Syria.

The president has justified not seeking congressional approval for the strikes by pointing to recent attacks on Americans and U.S. interests by the Iranian proxies, and has framed them as retaliatory.

The Constitution grants the president broad authority to act in self-defense, so Congress can do little if anything to stop potential abuses of Article II.

The White House has already signaled that Biden intends to rely more on Article II than even his predecessor. The Washington Post reported recently that the Biden administration will retaliate against the Iran-backed militias in Syria and Iraq even if no Americans are killed or injured — a lower threshold than the Trump administration used. That could prompt Democrats to demand that Biden seek congressional authorization for continued attacks on the Iran-backed groups.

Democrats say they’re just as worried about abuses of Article II as they are about an expansive interpretation of AUMFs already on the books. But they’re also clear-eyed about what they can control and what they can’t, especially as hostilities with the Iranian proxies appear likely to escalate — despite the Biden administration’s stated goal of deterrence.

“Does this escalate without a congressional discussion?” Kaine asked bluntly, suggesting that the debate itself is a necessary check on Biden.

Andrew Desiderio is a congressional reporter for POLITICO, covering the Senate, national security and foreign policy. He previously covered House investigations and oversight of the Trump administration. He joined POLITICO from The Daily Beast, where he covered Congress with a focus on national security, foreign affairs and Senate campaigns. He previously worked at BBC News and RealClearPolitics.

He is a graduate of The George Washington University’s School of Media and Public Affairs, where he studied journalism and Italian language and literature. He hails from Philadelphia and is a proud Philly sports fan.