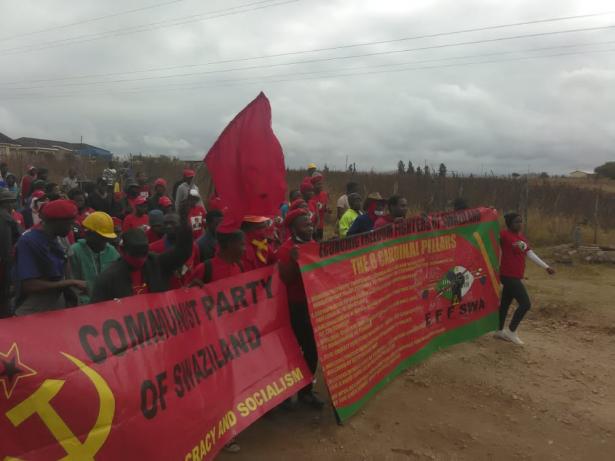 [Translated by Portside with thanks to Max Böhnel. Read the German original here.]

On Sunday afternoon [July 11, 2021] Cuban television interrupted the live broadcast of the European Championship final for an extraordinary speech by President Miguel Díaz-Canel. All other channels also interrupted their programming. The Cuban head of state addressing the people unscheduled is unusual and usually due to special events.

The same day, thousands of people took to the streets in several cities in the country to protest against food and drug shortages. Some chanted anti-government slogans. These were the biggest protests in Cuba since the so-called “Maleconazo”, when hundreds of people demonstrated on Havana's waterfront in August 1994, at the height of the special period. This weekend, demonstrators also gathered on the Malecón, as well as in front of the Capitol.

Videos of street protests in San Antonio de los Baños, Palma Soriano, Holguín, Camagüey, Santiago de Cuba and other places quickly made the rounds on social networks. Such an outbreak of social dissatisfaction is unusual for the Caribbean country and accordingly attracted a lot of attention abroad. Expressions of solidarity and calls for “intervention” quickly came from Miami.

Participants and eyewitnesses reported that the police had suppressed the protests, violently to some extent. Others called them brawls, with claims of several arrests. No account could be independently confirmed at first. This reflects the generally confusing situation, since the protests took place in several cities and the mobile Internet was switched off on Sunday afternoon. Some video footage shows groups of people breaking shop windows and looting foreign exchanges stores.

The protests began at noon on Sunday in San Antonio de los Baños, a small town not far from Havana. In this case it did not seem to be a spontaneous demonstration. One participant told the BBC that the protest was organized on Saturday via social networks for Sunday at 11.30 a.m. Hundreds of people took to the streets because of the long power outages, but also to demand “freedom” and political changes. The protest was broadcast live via Facebook and triggered calls on the networks for more demonstrations. President Díaz-Canel went to San Antonio de los Baños at noon and took a tour of the city, talked about the difficult epidemiological situation in the country and the government's efforts to address it.

In his televised speech that afternoon, he addressed the discontent and acknowledged numerous problems; but at the same time recalled the tightening of the blockade by former US President Donald Trump. Díaz-Canel blamed the United States and its blockade policies for the worsening economic situation for inciting the protests. He called for defending the revolution in the streets, saying, “We call on all revolutionaries, all communists, to take to the streets and go to the places where these provocations are taking place.” They will not be allowed, Díaz-Canel said, invoking a famous quote from Fidel Castro: “The street belongs to the revolutionaries.”

In the Parque de la Fraternidad near the Capitolio, several thousand people gathered in Havana: demonstrators, onlookers and defenders of the revolution. Supporters of the government gathered in several places in the capital. Posters of Fidel Castro were held aloft, Cuban flags waved, pro-revolutionary slogans chanted. In Centro Habana and Old Town, numerous special police units and rapid response teams were on the move in the afternoon and evening, and the Capitol was widely cordoned off. By early evening, the situation had largely calmed down.

The protests were triggered by the severe economic and supply crisis in Cuba. The collapse of tourism due to the Corona pandemic has cut the country off from important foreign exchange revenues and drastically narrowed the government’s room for maneuver. In addition, there is the tightening of sanctions by the US. People line up for hours every day to buy basic foodstuffs. Outside Havana, power outages sometimes last for hours.

And more: the pandemic situation has recently worsened. For months, Cuba had managed to contain the spread of the coronavirus and keep the number of infections at only a few dozen cases per day. But in recent weeks it has risen sharply: At first it was hundreds of cases a day, and in recent days even thousands. Especially in the province of Matanzas, the situation is very tense and the health system is on the limit of its capacity. The government sent medical personnel from the Henry Reeve Brigade to help, which Cuba sends abroad to deal with humanitarian disasters. It had never been used within the country before.

The pandemic, the dire supply situation, the sanctions, the queues, power cuts, inflation - there has been a lot building up in recent months. The discontent is palpable and will not go away easily. [END]

Support for the Cuban State from Latin America / teleSUR (Caracas)

__________
To Survive, Low- and Middle-Income Countries Must Work Together

The North now undermines the very globalisation it once imposed on the South. Hence, it is imperative to instead establish new, more equitable, pacifist and principled international relations, under multilateral auspices, promoting cooperation.

The battle for the future of eSwatini continues. A coalition of five political parties, including the largest, the People’s United Democratic Movement, has documented more than 40 deaths. They claim that about 1,000 people have been seriously injured and 500 have been arrested.

Attempts by Israeli hasbara (a Hebrew term meaning public relations efforts to defend a state’s interests) to whitewash their war crimes and spin the narrative of Gaza went belly up in the face of global protest, following graphic images of massive destruction and the shattered bodies of children in Gaza.

Analysis the day after the Haitian president’s assassination focused on liberal constitutionalism and elections. This narrow view overlooks the longstanding demands from organized popular sectors.

The same firms that used to close the door on environmentalist Ma Jun when he tried to convince them to invest in pollution controls are asking him for advice on how to reduce their emissions and be taken off the list of offenders.

Colombia has been gripped by social and political upheaval on a level unparalleled in the past half century. But more than just a spontaneous reflection of the broad social crisis that has gripped Colombia for decades, the present context portends a much deeper, wider, and momentous social explosion.

Their mission: To mobilize young women from Africa and the diaspora to take action against issues affecting women across the continent.

__________
A New Look at Power and Organization: Neither Vertical Nor Horizontal

Willingness to work and share resources with others even if you don’t agree with them 100 percent, and caring for the rest of the ecology instead of only your organization or political position. You’re not racing against others to see who will arrive at the head of the revolution, but working to create conditions in which you can win together.