labor At a Convention Like No Other, Teamster Challengers Turn a Corner

At the convention, members of the durable reform movement Teamsters for a Democratic Union and their allies achieved constitutional amendments they’ve been seeking for decades.

July 17, 2021 Alexandra Bradbury Labor Notes
Printer friendly
At a Convention Like No Other, Teamster Challengers Turn a Corner Published July 17, 2021 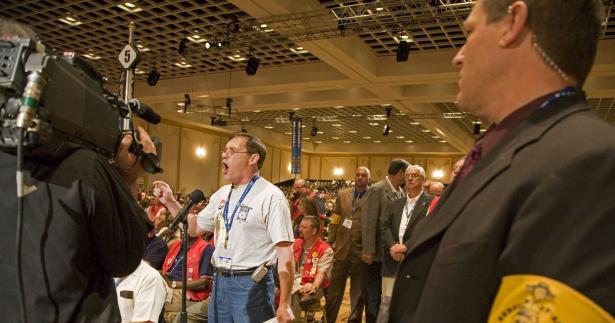 This was a Teamsters convention like no other—and not just because it was held online, avoiding the usual Las Vegas spectacle where a few brave reformers run a gauntlet of booing red-vested delegates.

Even in person, the 2021 convention wouldn’t have gone down that way. The opposition slate didn’t just squeak past the 5 percent of delegates required to get on the ballot, as it often has before.

This time it pulled half the votes—reflecting a power shift in the union.

All 1.3 million Teamsters have the right to vote on their top officers. Now that the slates are nominated, members will be mailed a ballot on October 4; votes will be counted November 15.

At the convention, members of the durable reform movement Teamsters for a Democratic Union and their allies achieved constitutional amendments they’ve been seeking for decades.

For one, they won majority rule on contracts. Delegates voted to end the two-thirds loophole, which let leaders force a contract through unless a supermajority voted no; President James P. Hoffa sparked fury in 2018 when he imposed a UPS pact where members’ top concerns were ignored or worse.

About that out-of-touch contract: delegates also wrote into the constitution that every bargaining committee from now on has to include rank and filers.

And they voted to distribute strike benefits from day one, not day eight—reflecting a growing willingness to put the ultimate weapon on the table. The 320,000 UPS Teamsters are looking ahead to the 2023 contract.

“You always want that tool in your toolbox,” said Willie Ford, reform president of Local 71 in Charlotte, North Carolina, and a candidate for trustee on the TDU-backed Teamsters United slate. “You may not have to use it, but it needs to be there.”

“The international union treats our members like they’re stupid, and they’re not,” said Fred Zuckerman, president of Louisville Local 89 and second on the Teamsters United ticket. “They’re very intelligent. They know what’s going on. We have found out that our members are willing to take on a fight, as long as leaders have their back.”

A few reform proposals went down to defeat. One would have protected the 5 percent nomination threshold. Raising it to 10 percent, something incumbents have threatened, would have kept the last four opposition slates off the ballot. Other proposals would have plugged a loophole on the officer salary cap and made rank-and-file experience a prerequisite for top office.

If elected he plans to clean house in division leadership roles around the country, end the communication “brownout” in contract negotiations, and fight to reverse the UPS concessions.

“We’re going to ask for as much member participation as possible,” O’Brien said. “You’re going to see a more active, more militant union.”

All the at-large Teamsters United candidates won about half the delegates. That’s a far cry from the single digits the opposition usually scores at the convention—even the 2016 slate, which nearly toppled Hoffa in the popular vote.

Typically the delegates are a tough crowd. Many are local union officers who have made their own bargains with the international leadership to get and keep power. So the even split this year shows that some local officers see which way the wind is blowing.

It also reflects a mood in the membership. Out campaigning, Ford said, he’s finding that the grassroots fight over the past six years to save Central States pensions has riled up freight Teamsters: “People lose faith in the leadership when something you’ve worked so hard for all your life seemed to be going down the drain.”

And at UPS, members are living the bad contract. Since the pandemic began, many delivery drivers are almost hitting the weekly legal maximum of 70 hours behind the wheel. “That is really taxing on their body,” Ford said. “Something has to be done.”

A Teamsters convention resolution in favor of organizing Amazon got a lot of press. That doesn’t mean a union drive is imminent, though it’s a good start.

Zuckerman said his local tested the waters a few years ago at sites in Louisville and couldn’t get anywhere—too much turnover. He believes a multi-union effort is required: “We need to sit down and form a strategy among everybody about how to attack this problem.”

O’Brien said the international union’s organizing department right now focuses more on monitoring union dissidents than on actually organizing. “We’re going to put organizers to work that first of all know how to organize,” he said, “and in industries and communities where they’re from.”

TDU leaders have stressed how an organizing drive could grow out of a high-profile UPS contract campaign—inspiring Amazon workers to set their sights higher, and mobilizing an army of Teamsters ready to help organize Amazon.

The online convention was a quirky spectacle. Speakers joined by phone while the video showed only the chair, Hoffa, who grimaced and walked off screen during one impassioned speech.

Many of the unseen convention delegates weren’t sitting at home in their bathrobes; they gathered regionally. Gabriella Killpack, a UPS driver and local trustee from Salt Lake City, got a taste of the traditional vitriol as one of just a handful of Teamsters United delegates in Denver—Vairma’s home turf.

The crowd there booed Killpack when she spoke on the virtual convention floor. A man followed her outside to call her a coward. Another person kept threatening her: “Some people here want to beat you the f--- up.”

Killpack was shocked at the intense animosity. “It just blew my mind,” she said. “But it’s also kind of invigorating. They couldn’t even handle one person supporting the reform slate. The old guard of the Teamsters are paper tigers.”

Vairma and two other Teamster Power candidates did not respond to interview requests for this article.

The campaign kicked off three years ago when Zuckerman and O’Brien announced they were teaming up, long before Hoffa announced his retirement and recruited Vairma as his successor.

TDU members ultimately voted to back the slate—some with enthusiasm, others with trepidation. O’Brien was an old foe who had run and won on Hoffa’s ticket before—a talking point the Vairma campaign is now making hay of.

But O’Brien took his job seriously as chief UPS negotiator in 2017. He reached out to opposition leaders to build the contract campaign; he insisted Zuckerman should be on the bargaining team. Hoffa then fired him as package division director.

TDU local leaders in the Northeast—the ones who had fought O’Brien most bitterly over the years—now call him their strong ally. Juan Campos, another powerhouse who leads a 15,000-member local in Chicago, joined the slate too.

The 2016 incarnation of Teamsters United fell just short of a win, with 49 percent of the vote. Now with an expanded coalition, it looks strong enough to go the distance.

But for a reform movement, there’s an upside to the rank and file going into victory with a healthy skepticism of the leaders they elect. Members will recognize the need to keep mobilizing and pushing from below.

With the nomination secured, candidates and activists are hitting the road to talk with as many Teamsters as possible. Supporters are signing a pledge card that will be mailed back to them as a get-out-the-vote reminder.

In her local, Killpack is both campaigning for the slate and promoting collective action among overworked UPS drivers. By the end of the summer she aims to bring drivers together for parking lot meetings, then rallies with demands.

“Our primary objective is rank-and-file Teamsters organizing Teamsters over our issues,” she said. “A change in leadership only works if we also get members to step up and take on these fights. If the members aren’t activated and organized, then we have nothing.”

A version of this article appeared in Labor Notes #509, August 2021. Don't miss an issue, subscribe today.

Alexandra Bradbury is the editor of Labor Notes.al@labornotes.org