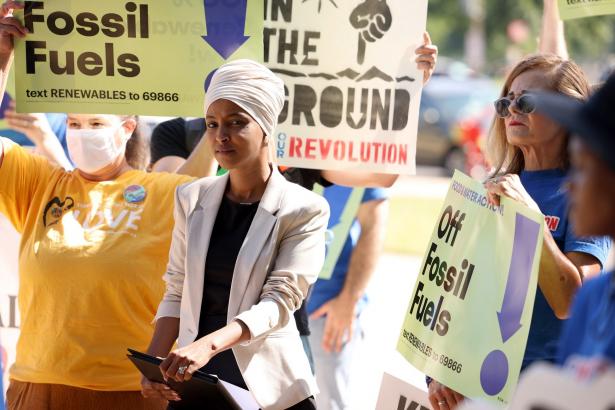 Last Friday, a video went viral of a bemused German driver navigating through floodwaters, laughing at a floating car before realizing that he had lost control himself. It was a lighthearted moment amid flooding that has killed at least 110 in Europe, a devastating drought in Brazil, deadly landslides in India, and heat waves and wildfires in the Pacific Northwest. We are all navigating a climate-changed century in very different vessels. Twenty-one lawmakers from across the world, however, say there’s a better, more collaborative option.

The Global Alliance for a Green New Deal, launching Monday, counts among its initial group lawmakers from every continent except Antarctica, belonging to both opposition and governing parties from Tanzania to the United States, represented by founding member Congresswoman Ilhan Omar. Their goal is to put the principles of a Green New Deal at the heart of a global recovery from Covid-19, united “in the pursuit of economic, social, racial and ecological justice and in global solidarity,” the group’s founding declaration states. “We are at one in our belief in the need for a rapid and just transition to an economy that operates within planetary boundaries and supports human flourishing.”

That means “significant” public investment in clean energy and conservation, coupled with policies to reduce resource use in the global north. They also plan to tackle problems they say are hampering countries’ ability to adapt to and reduce climate change, like tax dodging, vaccine inequality, and debt burdens. Among the founding calls of the alliance, accordingly, is to “dismantle the systems of predatory finance that are responsible for keeping governments on a debt-treadmill, undermining public services and contributing to social and environmental destruction.”

Share this article on
“There’s this big force of neoliberalism that is a boat keeping on in the same direction. We need to join our forces to divert the direction of that boat.”

They also aim to put pressure on world governments ahead of the United Nations climate talks, COP 26, set to take place in Glasgow, Scotland, this November; a study released late last year found that G20 governments are committing 60 percent more to fossil fuel–based activities than to sustainable investments in their Covid-19 responses.

The idea “is that all of us are fighting at all levels, but we have something bigger in front of us,” founding alliance member Manon Aubry, a French member of the European Parliament who co-chairs its Left Group and co-founded its Inter-Group on the Green New Deal, told me by phone. “There’s this big force of neoliberalism that is a boat keeping on in the same direction. We need to join our forces to divert the direction of that boat.”

The Global Alliance for a Green New Deal is, in part, a response to a spate of net-zero pledges that have emerged from corporations and governments over the last several years. In the European Union, politicians are in the process of rolling out a “Green Deal,” details of which were announced last week. Among other measures, the “Fit for 55” (percent emissions reductions by 2030) plan will create new carbon markets for carbon-intensive sectors, phase out coal, and end the sale of fossil fueled internal combustion vehicles by 2035.

To observers in the U.S.—especially those paying attention to the slow progress of infrastructure negotiations—these European policy proposals and pledges might sound great. But left-leaning Continental lawmakers are quick to point out that the bar shouldn’t be nearly so low.

In the past few years, environmentalists and democratic socialists (or other leftists) have started to band together as the weather and electoral constituencies have begun to shift.

“They are not challenging … our agricultural policies that are very carbon intensive and polluting,” Aubry said of the climate proposals out of Brussels, noting that the plan falls short of the 65 percent reductions needed for the bloc to do its part keeping warming below 1.5 degrees Celsius (2.7 degrees Fahrenheit). “They are not challenging austerity policies that limit the ability of states to invest in renewable energy or insulation. They keep on the same logic of free trade,” she added, referring in part to the Energy Charter Treaty that protects fossil fuel investments.

The Alliance offers other models to draw on. Costa Rica is one of the few places on earth with a national decarbonization plan on the books, passed by the ruling Citizens Action Party in 2019. Currently, the country gets roughly 99 percent of its electricity from renewables. Paola Vega Rodriguez, a founding member of the alliance and Citizens Action Party congresswoman, chairs the legislature’s Environmental Committee. She urged other countries to see their plan as an inspiration, but noted the challenge of putting climate at the center of an economic and development policy more broadly. “Hungry people will not make the climate issue a priority, but they will make it a priority if climate policy offers them a job. I think it is the great challenge that we have, and the Alliance can help us with that,” she said over the phone.

Aside from being a relatively novel union of lawmakers from the global north and global south, the Global Alliance for a Green New Deal represents a new sort of “red-green” pact that young voters, swelling the ranks of left-wing and green parties in many countries, have made possible. In the past few years, environmentalists and democratic socialists (or other leftists) have started to band together as the weather and electoral constituencies have begun to shift.

Caroline Lucas is a longtime Green Party member of Parliament in the U.K., and co-chair of the All Party Parliamentary Group on the Green New Deal. Back in 2007, she became a founding member of the U.K.’s Green New Deal Group, a set of thinkers who did some of the earliest research on what an ecologically sustainable recovery might look like. “There is an opportunity to think much bigger even than we did in 2007, because what we have learned is that governments can do big things,” she said, noting expansive governmental responses—in the U.K., especially—to Covid-19. In the eleventh year of Tory rule, the Green Party and Labour Party are attempting to combine forces, both in formations like the All Party Parliamentary Group that she chairs with Labour MP and fellow alliance co-founder Clive Lewis, and in elections. “What happens here so often is that the more progressive parties all contest, so we split the vote and the Conservatives go through the middle and win the seat. There is an increasing recognition that that is serving no one.”

Left-wing lawmakers face a somewhat similar situation in Ecuador, which elected right-wing President Guillermo Lasso earlier this year. National Assembly member Esther Cuesta served for a decade in Rafael Correa’s Pink Tide government, and represents Ecuadorian migrants abroad. Now in opposition, she would like to see the Union for Hope—the largest parliamentary opposition group—find common cause with the Pachakutik, the second-largest opposition group and the electoral arm of the muscular Indigenous federation, CONAIE, after a contentious history. “I think it is possible to get minimum consensus on legislation that can promote a just recovery, a greener economy, a more sustainable economy,” she told me. “We share many visions.”

Internationally, Cuesta is eager to see collaboration from the North and South transform multilateral institutions that have ensnared countries like Ecuador in punishing debt arrangements; the Global Alliance for a Green New Deal is calling for both widespread debt relief and to democratize the Bretton Woods institutions—i.e., the International Monetary Fund and World Bank. “It’s good to have an ally in Washington. It’s good to have an ally to be able to propose changes in the enormous debt that we have with the IMF,” Cuesta said. “Having this collaboration and cooperation with legislators in the North can help us lobby institutions in which the South would otherwise have much less of a voice.”

The Alliance also offers a complement to the Paris Agreement on climate change—currently the primary international framework on this topic. The Paris Agreement encourages countries individually to come up with their own plans to satisfy their “common but differentiated responsibility” to lower global emissions, via state or bloc-wide (in the case of the EU) nationally determined contributions. These NDCs are all meant to add up to keep warming “well below” two degrees Celsius. Whatever the merits of that approach, many also see the need for additional forms of collaboration to help manage the wide-ranging transformation that both a global energy transition and climate adaptation will require. Inadequate commitments on climate finance from the global north—in other words, a reluctance to pay its fair share given its disproportionate contribution to global warming—have always been a major sticking point of U.N. climate talks but have reached a fever pitch over the last year, inflamed by the disastrously unequal global vaccine rollout and therefore divergent prospects for economic recovery.

Green energy’s proliferation in the global north, as well, is premised on mining for more minerals. Plenty of that is happening in the South, and while there aren’t currently shortages of technology metals like lithium—used to make batteries that power electric cars—there could be soon. Alliance members point out that lines of communication between sources of demand and supply for lithium could prevent exploitation by supporting consistent labor standards and reductions in resource use in the North, while showing that decarbonization is a thoroughly international process that can’t be decided solely within national borders.

“A transformation in one country can’t be built on the extraction of resources and the exploitation of people in other countries,” Caroline Lucas said. “A real Green New Deal worthy of the name would recognize the U.K.’s colonial history and climate debt to the global south. Part of that would need to be about transferring technology, canceling debt, and learning from Indigenous communities in the global south,” for example when it comes to land management and biodiversity.

“Indigenous peoples protect forest carbon more effectively than anyone else in the Amazon,” added Joenia Wapichana, an Alliance co-founder who’s a member of the Wapixana tribe of northern Brazil and the first Indigenous woman elected to Brazil’s Federal Parliament. She’s helped start the Alliance, she said, “to join forces so my work in parliament can contribute to the strengthening of the legislative process in defense of collective rights, the environment and in defense of Indigenous peoples.”

As the U.S. political class this week focuses on the infrastructure battle on the Hill, the Alliance offers a much-needed reminder of climate change’s international context. Even the progressive edge of climate politics in the U.S. can be a bit parochial, omitting questions of climate finance, debt, and historical responsibility that are roiling in U.N. climate talks and other multilateral institutions. As Congress haggles over the details of a clean energy standard and electric vehicle chargers, it can be easy to forget that the U.S. is not, in fact, the center of the universe. For the planet’s sake, that’s almost certainly a good thing.

[Kate Aronoff is a staff writer at The New Republic. @KateAronoff]