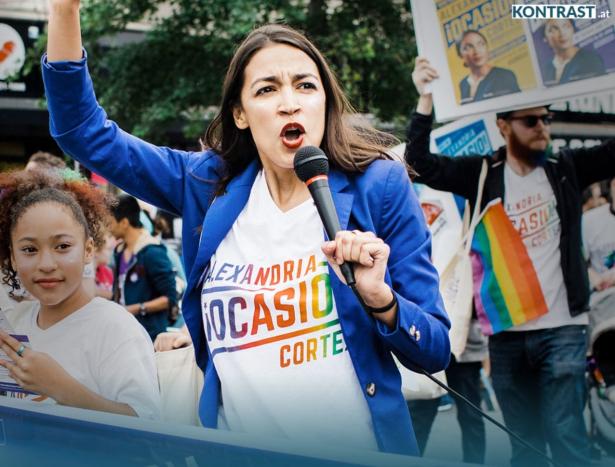 "Zitat Alexandria Ocasio-Cortez" by kontrast.at, licensed under CC BY 2.0

Smoke from raging, climate-fueled wildfires out West blanketed East Coast skies this week. Siberia is burning, too. And flooding in China has displaced some 1.2 million people. In Jacobabad, Pakistan, conditions are too hot and humid for the human body to withstand, leading to a rash of heat-related illnesses and death. One might think this drumbeat of extreme weather would have some bearing on the week’s political events in D.C. It hasn’t. Republicans are still dragging the process along on the White House–supported infrastructure bill so as to obstruct it for as long as possible, and Joes Manchin and Biden are still holding out hope for bipartisan agreement from a party that can’t agree that Donald Trump lost the presidential election.

A few days before the smoky haze made it risky for New Yorkers to take their morning jog, the members of the New York Times editorial board chided Biden’s “chattering critics on the left wing of his party” for not giving him enough credit for a series of environmental pledges, a handful of executive actions, and a bipartisan infrastructure bill whose text has not been released. “This was less than Mr. Biden wanted,” the editorial board wrote of the yet-to-be-passed package, “but his critics reacted as if there were nothing there at all, sending protesters to the White House and Capitol Hill.” The climate left, the Times editorial board and others have recently suggested, is too tough on the president, with counterproductive results.

They’re wrong. The reason there are currently any climate provisions in this infrastructure package is because of the chattering leftists the editorial board and its fellow travelers are telling to pipe down and call it a day.

After the failure of cap-and-trade legislation at the start of the Obama administration, the Beltway was out of ideas for how to move climate policy forward—intimidated by the reactionary frenzy the Koch brothers helped whip up to defeat that bill. Democrats largely stopped talking about climate policy at all, since the prospects for passing it looked so dim.

The moment things started to change can be traced most neatly back to a 2018 Sunrise Movement sit-in at then–aspiring House Speaker Nancy Pelosi’s office, where newly elected Congresswoman Ocasio-Cortez showed up. (While Pelosi took the day mostly in stride before ridiculing a “green dream, or whatever,” other top Democrats feared the demonstrators’ demands would undermine their prized committee posts, and launched into hissy fits.) But the shift had its roots in Indigenous-led fights against the Keystone XL and Dakota Access pipelines, among others; Bernie Sanders’s presidential campaign; and decades of unglamorous climate and environmental justice organizing.

Sunrise and Ocasio-Cortez, when they demonstrated in Pelosi’s office, weren’t calling for the immediate passage of a Green New Deal. Rather, they were proposing a select committee that would take more than a year to draft legislation so that, by now, there would be something coherent to roll out and pass. (This request was rejected.) The innovation climate activists offered was, instead of seeing climate policy as a matter of sacrifice—figuring out the right way to make things more expensive—reframing climate policy as a series of investments that create jobs and improve livelihoods. Lacking any other ideas for how to talk about climate change, the Biden administration and top Democrats have mostly run with that, ending a decades-long love affair with carbon pricing as the be-all and end-all of emissions reduction policy.

The result has not been a wholehearted embrace of the Green New Deal but a basic friendliness toward its strategic vision: namely, that policymakers have to make climate policy look like something ordinary people can understand and might want to see. This happened, in part, because the Biden campaign saw the Sanders wing of the party, where young climate activists clustered, as a constituency worth appeasing, and proceeded to enlist them in unity task forces. Whatever its merits, the push for a Civilian Climate Corps is a product of that appeasement process. So is the administration’s all-of-government approach to greening the executive and its creation of dedicated Cabinet posts on climate. The fact that Democrats as fundamentally moderate as Joe Biden and Chuck Schumer are sticking up for climate policy—to the extent that they are—behind closed doors is in no small part thanks to climate leftists who refused to shut up.

The role of social movements is to make things that look impossible seem possible.

Despite global warming being an existential threat, you can count the number of Democratic congresspeople whose top issue is climate change on one hand. The rest rely on an overworked 25-year-old staffer to tell them how to vote on it and what to say in hearings and on television. If these senators and representatives pay attention at all to the climate crisis outside of those briefings, it’s because someone has forced them to, by creating a situation that has made reporters or their constituents ask them about it. Members of Congress are, by and large, insulated from the effects of extreme weather, shuffling between air conditioned cars, homes, and office buildings. They are busy on hours of call time with donors who in some cases would prefer that they didn’t do very much to address the climate crisis at all.

The average age of a House member is 58. The average senator is 62. Statistically speaking, they will be dead by the time shit really hits the fan in the United States and probably still insulated from its worst effects if they’re alive: Over half of members of Congress are millionaires.

The brutal fact is that, since James E. Hansen’s pivotal testimony before Congress on the “greenhouse effect” in 1988, no strategy to pass comprehensive climate policy in the U.S. has been successful; every “win” activists have managed to eke out so far should be put in that context. Every rhetorical commitment from Democrats to pass climate legislation is so far just that: rhetorical. Even the $3.5 trillion worth of overall infrastructure spending now on the table—itself already a gross compromise with physics—may not pass. The climate left is pushing to make sure it does. The full range of policies needed for the U.S. to play its part in zeroing out global carbon emissions by 2050—what’s really needed—are not politically possible right now.

The role of social movements is to make things that look impossible seem possible. In recent years, the climate left has done just that. There’s no guarantee it’ll be able to do it again.

Left to their own devices, though, neither Congress nor the White House can be trusted to pass climate policy. They certainly won’t pass anything that meets the scale of the challenge head-on, which requires a radical shift away from the fossil fuels that have built industrial capitalism. Many, many thousands of people need to join the fight and put more pressure on congressional inertia. Who knows whether they will, or if it’ll work. But no one should be telling the handful of people who’ve dragged politicians this far to keep quiet.

Kate Aronoff @KateAronoff is a staff writer at The New Republic.