Will the current situation in Cuba lead to US-backed violence in Cuba? To answer that question, we first need an understanding of what’s happening. There has been ongoing violence from the United States towards Cuba for 60 years. 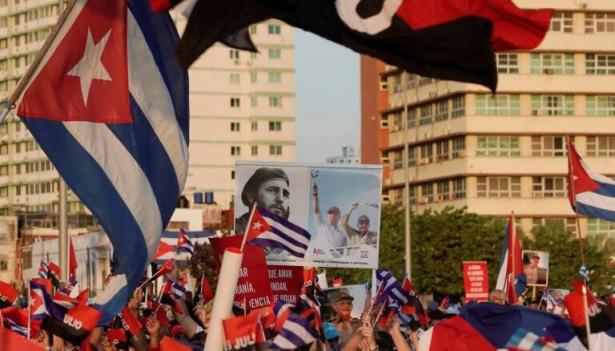 The violence isn’t new. In fact, there has been ongoing violence from the United States towards Cuba for 60 years—from an economic embargo that prevents US companies from trading with Cuba and encourages other countries not to do so, to military, ideological, and cultural violence. And that doesn’t include the violence and occupation following the U.S. invasion of Cuba in the so-called Spanish-American war in the late 1800s.

The United States and right wing organizations across Latin America instigated, supported, and provided money to these movements. Additionally, there were several high-level threats in Washington, as well as some at low levels; however, the low-level threats were largely orchestrated by private citizens (some Cuban-Americans) who want to live here but want also to push for change in Cuba.  There is some risk that the United States government will take action, but this is mainly about trying to create a “soft coup”.

Most of the recent protesters in Cuba were peaceful. What was concerning, however, was the number of people falling in with what was really a provocation out of a sense of despair.

But here is my view, keeping in mind that I have spent 11 of the last 18 months in Cuba. People have gone through 17 months of pandemic and hardship.  When I returned from Cuba to Massachusetts in June, people were exhausted and were finding daily life very difficult due to shortages. Not only that but the constant stress of following the strict protocols for Covid was difficult, however, as vaccinations began, people saw there seemed to be light at the end of the tunnel.  Soon after the Beta and Delta variants emerged, the virus just bloomed — from a barely imaginable 2,000 cases one month — to nearly 7,000 the next. So there was now the renewed stress and fear of contracting the virus before one could get vaccinated and the ongoing stress of shortages in not just food but medicines as well.

You couldn’t find antibiotics, or analgesics or colostomy bags.  You had to stand in hours-long lines to buy horrible-tasting US chicken, or spend high amounts of money to buy it from resellers.  There was a month of shortage of cooking oil (I finally found some online to send to my family at $22 for a liter).  And then with the surge in Matanzas/Cardenas, a large quantity of the already scarce supplies had to be rushed to that province for hospitalized positive cases and isolated contacts.

The minister of planning said the other day that it costs about 4,500 pesos a day in food, supplies, equipment, and medicine to care for a single patient in hospital care with Covid.  It costs 13,045 pesos a day for someone in intensive care.

This is almost equivalent to the combined salary of my nephew and his wife –5000 pesos a month.

At the same time, it was becoming pretty clear that Biden was not going to do anything to lift any of Trump’s 243 measures against Cuba, including, the ability of U.S.-based families to send remittances to their Cuban family members from the U.S.

The hard currency stores were the hardest hit by vandals during the protests — see the video.  These stores were expanded in January because the hard currency income and earnings of the government had been reduced by millions and millions of dollars in 2020, and then even further, and substantially reduced just in the first six6 months of 2021.  Not only must Cuban entities purchase everything abroad that they can’t produce, but they are also restricted by the Embargo in their purchases abroad, which are in hard currency. At the start of 2021, the Cuban Ministry of Domestic Trade expanded the special stores where you could buy imported goods using hard currency to include imported food items as well as just imported appliances and car parts. This step was seen as one of the few ways to capture the scarce hard currency circulating in the country to be used to make further purchases abroad, something only a limited number of some people could access.

Well, it’s hard for ordinary people to understand how complicated all of this is, let alone accept it, even when they do understand it. It all just does not seem fair.  And the fact is simple: really, people just want someone to fix the problem. And when it’s not fixed, as in most places, people blame the government.  The U.S. embargo can seem intangible; the government is right there and supposedly committed to guaranteeing the quality of life, in the Cuban concept.

In Cuba, there are groups of people who hate the government, hate the system, and just want to be able to live the way people in capitalist countries live. There is another group of people who really have a problem with the way so much is centralized, for a variety of reasons and beliefs. And then there were simply a large number of people who simply felt they couldn’t take it anymore.  Yes, they had their first, second, and some even third dose of the vaccine, but it seemed as though that wasn’t going to change anything, and certainly not any time soon.

I think it also is evident that there is an even a larger majority of people who also are exhausted and anxious, but who think and believe that the only way forward is to keep doing what they are doing:  working with the government and systems in place to try to push forward through this twin disaster of Covid 19 and Biden’s recalcitrance.  The alternative is to leave each person and their family on their own, effectively throwing out everything they’ve worked for and sacrificed to the dogs.  They turned out en masse, Saturday July 17, taking a risk of Covid to make clear their support for going forward.

I’ll end with what my 20-year-old niece, who is Cuban, wrote to me just after the protests of July 11:

“I am just so stressed.  I don’t understand anything and I just want it to end.  I’m stressed by the whole situation of Covid, the being locked inside all the time, the long lines, the prices, and now on top of everything these protests that don’t accomplish anything.  I am just so worn out.  I feel like a canary in a cage and I don’t like being locked up.  Every day I go from work to home and back again.  I need to go out, I need to see things, I need to do things.”

She did not attend turn out in the streets forthe protests as she said they simply stressed her more.

Here is a petition that I hope everyone will not just sign but pass on far and wide.  It was put together by a diverse group of individuals nationally, some affiliated with Cuba solidarity groups and others not:  EMERGENCY RELIEF FOR CUBA.  And all who can might consider going to Washington DC to join the protest July  25  led by the Cuban American group Puentes de Amor that just walked from Florida to Washington to protest the US embargo on Cuba.   You can get more information about writing to this email.