'Recess Can Wait': 23 Groups Demand Senate Stay in DC to Pass For the People Act

"It would be unconscionable for the Senate to break for recess without addressing the ongoing assaults on our democratic systems happening across the nation." 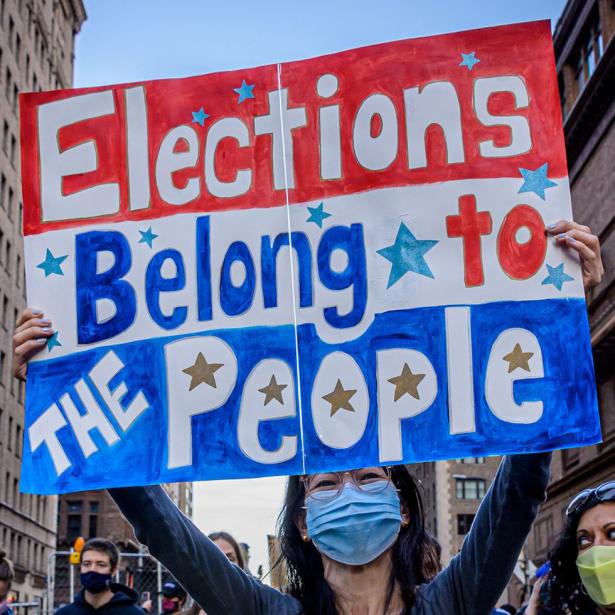 The Declaration for American Democracy coalition and 22 member organizations on Tuesday issued statements calling on the U.S. Senate to delay the August recess to pass the For the People Act—sweeping voting rights legislation the House approved months ago.

Jana Morgan, director of the Declaration for American Democracy (DFAD), said that President Joe Biden and Senate Majority Leader Chuck Schumer (D-N.Y.) "know that time to pass the For the People Act (S. 1) is quickly diminishing."

"It is critical that this legislation is enacted before the 2022 midterm elections," she explained, "and before partisan maps that would disenfranchise voters for the next decade, especially voters of color, are drawn."

"We call on Sen. Schumer to delay Senate recess until the bill is sent to the president's desk," she continued. "We also call on President Biden to use the full power of the Oval Office to ensure that the For the People Act is signed into law before the end of summer and to not let the Jim Crow filibuster stand in the way."

Morgan added that "one of the major tenets of a fully functioning democracy is that the public interest, not special interests, guide decision-making. More than 80% of Americans across party lines support the For the People Act, and it is time for the Senate and the Biden administration to rise to the occasion and respond to the will of the people: Recess can wait; our democracy can't."

The call comes after Republican senators last month blocked debate on the pro-democracy bill that would thwart some of the GOP's recently enacted state-level voter-suppression laws, a move that elevated demands from progressive activists and lawmakers to kill the filibuster.

Abolishing the filibuster requires the support of every single Democrat in the evenly split Senate. Not only are there some Democratic holdouts, Biden—a former senator himself—has also stopped short of calling for scrapping it, instead advocating for a return to the so-called talking filibuster and claiming that Republicans "know better" than to suppress voting rights.

Progressive advocates behind Tuesday's demand for delaying recess—which is scheduled to start on Monday, August 9—disagree.

"Our democracy is on the line," warned Free Speech for People president John Bonifaz. "The Senate must not go on recess in the midst of this voting rights crisis. Senators have a duty to protect and defend the constitutional right to vote, the bedrock of our democracy, and they must cancel their recess to ensure that they end the filibuster and pass now the For the People Act and the John Lewis Voting Rights Advancement Act."

As Ben Jealous, president of People for the American Way, put it:

More than 50 years ago, Dr. Martin Luther King Jr. wrote poignantly about how it feels to be told to "wait" for justice and equal rights, in his "Letter from a Birmingham Jail." For the Senate to go on August recess without addressing the voting rights emergency in this country would be to tell us to 'wait' once again. There is no more time to wait. Every day that passes brings more efforts by Republican-controlled states to suppress the votes of Black and brown Americans. So we are saying to senators, your recess can "wait"; voting rights for all Americans can't. Do not leave Washington without passing the For the People Act. This is a moment in history when all Americans will be watching what you do, and we'll remember.

Noting that "this year alone, 18 states have already passed 30 new laws to restrict access to the ballot," Tiffany Muller, president of End Citizens United/Let America Vote Action Fund, argued the "only way to protect the freedom to vote is for Congress to respond by passing the For the People Act."

Multiple advocacy group leaders highlighted the dozens of Democratic state lawmakers who left Texas for Washington, D.C. to block GOP voter suppression legislation. On Monday, the Republican speaker of the Texas House of Representatives signed an arrest warrant for a Democrat who returned to Austin briefly in an attempt to engage in "good faith dialogue."

"State legislators in Texas have literally fled the state in a last-ditch effort to protect Texans' freedom to vote—with the hope that the Senate will act now to pass legislation that will stop the rampant voter suppression efforts in Texas and elsewhere," said Christina Harvey, executive director of Stand Up America.

"They, and we, are running out of time to protect our freedom to vote, our elections, and the sanctity of our democratic process," Harvey said. "The American people, especially those long left out of equal participation in our democracy, cannot wait for the Senate to return from a monthlong break before they pass urgently needed legislation like the For the People Act and the John Lewis Voting Rights Act."

Clean Elections Texas executive director Liz Wally emphasized that the Texas Democrats left their state to highlight that only the passage of S. 1 "stands between Texans and some of the most extreme, far-right policies in the country."

Pointing to the upcoming release of Census data for redistricting and the need for election officials to prepare for primaries, Wally added that "the Texas legislators are fighting not only for ALL Americans but for our democratic form of government."

According to Sister Quincy Howard, coordinating director of the Faithful Democracy Coalition, "It would be unconscionable for the Senate to break for recess without addressing the ongoing assaults on our democratic systems happening across the nation."

"The well-being of our democracy is a moral issue of the utmost importance: It's about the dignity of voters and about the ability of the people to choose their leaders and the future for next generations," she added. "There is a path to passage and the power to make it happen—what we need is the political will and the courage."