For the People Act vs. Jim Crow in New Clothes

A broad coalition of groups is calling for a week of action April 5-9 to press for passage of the For the People Act, S.1 – federal legislation that would counter the GOP’s push for harsh state-level voter suppression bills. 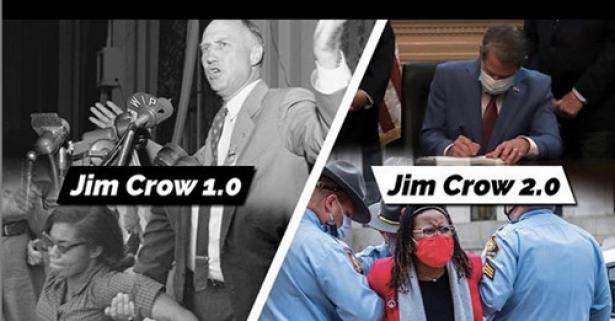 The number one priority of today’s Republican Party is to implement the biggest voter suppression campaign since the rollback of Reconstruction after 1876. Like the resurgent Confederacy 150 years ago, the GOP is more committed to white supremacy than to anything close to “one person, one vote” democracy.

The main difference between then and now is that – largely because of demographic change – today’s advocates of white political rule fear that this is the last chance for their authoritarian project to take hold. Texas Senator Ted Cruz was blunt. Speaking on an invitation-only strategy call for GOP lawmakers, he warned that if the For the People Act voting rights bill now before the Senate becomes law, “the GOP won’t win elections again for generations.”

It’s not just top echelon GOP leaders who see things this way. The belief that the country “as they know it” is under existential threat saturates the GOP base, especially white Evangelical Christians. A recent survey by a top Republican pollster asked voters if they thought politics is more about “enacting good public policy” or “ensuring the country’s survival as we know it.” Only 25% of Republicans said politics is about policy. Nearly half said it’s about survival.

This is not breaking news. After Trump won the 2016 Republican presidential nomination, conservative intellectual Avik Roy cut to the chase on the reason why:  “Conservative intellectuals and politicians … had this view that the voters were with us on philosophical, economic conservatism. In reality, the gravitational center of the Republican Party is white nationalism.”

In the wake of Trump’s 2020 loss, and especially for a few days after Confederate-flag-waving Trumpists stormed the Capitol, some pundits speculated that the GOP would distance itself from blatant lies and shameless white supremacy.

But instead, the party has doubled down.

The “naked power grab” voter suppression law the GOP just rammed through in Georgia is their model. Arizona is their next target, and GOP leaders hope to follow up with similar restrictions in dozens of additional states. Every force in the conservative orbit is on board, as reported by Nicholas Riccardi and Michael Biesecker for the Associated Press: “Voting restrictions are now viewed as a political life-or-death debate, and the fight has all-but eclipsed traditional Republican issues like abortion, gun rights and tax cuts… it’s  visible even among groups with no clear interest in the voting debate.” They went on to name some of the groups involved: the anti-abortion Susan B. Anthony List, the “small government”-focused FreedomWorks, the Heritage Foundation, and the Family Research Council.

Yet a tone of desperation pervades the right wing’s planning sessions. And for good reason. Arizona and Georgia, states that had been safely in their column, both flipped to Biden in 2020. Republican losses in the two Georgia run-offs gave Democrats control of the Senate and gave voting rights legislation a chance to become law. The continuing energy and tangible gains those victories have already produced (passage of the American Rescue Plan, for instance) signal that 2021 might not see a repeat of the 1876 disaster. Rather, we could see legislation that builds on and expands the “Second Reconstruction” civil rights and voting rights victories of 1964-65.

The balance of power is nearly even; the country is on a precipice. What the left does will make a difference. Will the U.S. be thrown backward to “Jim Crow in new clothes?” Or can enough clout be built to take the road toward a vibrant multiracial democracy, with all the potential for transformative change that path embodies?

Fights over the next two to four years in workplaces, communities, and schools, in Congress and at the ballot box, will decide which way things tip.

A key battle in the immediate weeks ahead is over the filibuster.

THE RACISTS NEED THE FILIBUSTER

The GOP needs the filibuster to block the For the People Act, termed by the Brennan Center for Justice “the most significant democracy reform measure in over half a century.” Its provisions (detailed here) “set national standards to ensure that all eligible citizens have the freedom to vote and the ability to make that ballot count… and by doing so it would stop the new wave of voter suppression cold.”

The For the People Act has already passed the House, and has been introduced in the Senate as S.1. With Democrats in control of that body, the bill is a highly likely to attain a majority vote. But Republicans are unanimously opposed, and under current Senate rules, they have the tools to block the Democratic majority.  A minority of 41 Senators can use the filibuster to prevent the bill from being brought up for a vote. They don’t even have to show up to do so: They can simply phone in, saying they intend to filibuster – and that’s that.

To counter such anti-democratic obstructionism, advocates of voting rights and racial justice, especially Black activists and officeholders, are demanding that the filibuster either be scrapped completely or be banned  when considering civil rights or voting rights legislation.

GOP lawmakers and the entire right-wing media machine cry foul. They present the filibuster as a sacred component of the U.S. Constitutional system, designed to protect democratic rights.

In fact, the country’s founding documents make no mention of the filibuster or any other procedure that would allow a minority of Senators to block legislation. Nothing of the sort was practiced for the country’s first few decades. The filibuster evolved in the lead-up to the Civil War, promoted by slavery’s leading Senate champion, John C. Calhoun. It became widely used in the Jim Crow era as southern senators sought to defeat civil rights bills. In 1917, the Senate adopted “Rule 22,” codifying the need for a supermajority (originally 67 votes, now 60) to end debate and bring a bill to a vote. In the following decades, only civil rights bills were consistently subjected to the filibuster – so none ever passed. All other legislation rose or fell on a simple majority vote (except treaties and Constitutional amendments).

In 2017, the GOP stirred some hypocrisy into their racism. The GOP used a “carve-out” (suspension) of the filibuster rule to push through a $1.5 trillion tax cut for the rich and their attempt to repeal Obamacare (which ended up failing by one vote).

But when “Last Stand for White Christian America” is emblazoned on your banner, racism and hypocrisy are a matter of course. Mitch McConnell, true to form, promises that it will be “nuclear winter” in the Senate if the Democrats touch a hair on the filibuster’s head.

And here is where it gets complicated.

Every House Democrat voted to pass the For the People Act, and most Democratic Senators also support it. But at least two – Joe Manchin of West Virginia and Kyrsten Sinema of Arizona – don’t support all of its provisions and advocate some kind of compromise with Republicans. Those two are balking at the idea of filibuster reform. Others on the Democratic side who are lukewarm on the For the People Act’s sweeping character are also vacillating. Many want only to return to a “talking filibuster” – meaning Senators must keep speaking on the Senate floor to prevent a bill from coming to a vote rather than simply signaling that they have 41 or more opposing votes. That would put a strain on those who filibuster and shine a bright spotlight on their obstructionism and the reasons behind it. But it would still leave their ability to block voting rights legislation in place.

Voting rights and pro-democracy activists have launched a full-court press demanding that Senate Democrats do whatever it takes to prevent Senate minority obstructionism and push the For the People Act over the finish line. Grassroots racial justice activists and Black elected officials at all levels are driving the effort, and a large cohort of whites in the Democratic leadership have jumped on board. Specific campaigns are underway targeting Manchin and Sinema. These efforts have momentum and there are signs they are making a dent.

On this issue, as with so many others, the terrain has changed since the pre-Trump era. The caution then shown by top Democrats when it came to fighting Republicans (caution here being a charitable term) is now waning. Previous advocates of conciliation are reading from a different script. When giving the eulogy at John Lewis’ funeral Barack Obama called the filibuster a “relic of Jim Crow,” and called for its elimination if needed to restore voting rights. President Biden said in his first press conference that the filibuster was “being abused in a gigantic way,” and that he was “willing to consider” its full elimination if the GOP continued its obstructionism.

These words alone won’t do it, though. This is where our movements come in. The Black voter turnout in November and the Black-led victories in the Georgia Senate run-offs were crucial in giving Biden the presidency and the Democrats control of the Senate. The hard work to make that happen was done for results, not rhetoric. So everyone from the President on down has to be put on notice. Rev. Al Sharpton put it like this:

“All of us in the civil rights leadership are committed to policies and laws and causes, not to people’s political careers. We’re not into that. We want to change the country. And if there is not feasible evidence that we’re doing that, it is not in our concern to be aggressively involved.

“The pressure that we are going to put on Sinema and Manchin is calling [the filibuster] racist and saying that they are, in effect, supporting racism. Why would they be wedded to something that has those results?”

Of particular importance, radical voices are linking voting rights to the economic and other policy changes the country needs. Rev. William Barber, co-chair of the Poor People’s Campaign, explains:

“I said that to the Biden administration and said it to the Democrats, you cannot be serious about dealing with racism, and then you don’t get living wages done. And you’re never gonna get living wages done … and health care if you don’t push and fight against voter suppression. If you can’t support getting rid of the filibuster, don’t tell me you love John Lewis. John Lewis wanted living wages, and he wanted voting rights.”

There is lesson for all social justice activists in Rev. Barber’s approach. The fight for racial justice is driving the campaign for voting rights and providing the moral high ground and political punch to make abolishing the filibuster a real possibility. And since the filibuster is the weapon that the racist reactionaries plan to use not just to block democratic rights but to block transformative policies on the economy, health care, climate change, and more, it is the fight for racial justice that is powering the drive for the full social justice agenda.

Winning passage of the For the People Act is at the pivot of the progressive agenda. It’s urgent, and it can succeed.

A broad coalition of more than 150 organizations ranging from the Working Families Party and the Communication Workers of America to March for Our Lives, Planned Parenthood and Color Of Change has called for a “For the People Week of Action” April 5-9. Full information can be found here.

Max Elbaum has been active in peace, anti-racist and radical movements since the 1960s. He is an editor of Organizing Upgrade and the author of Revolution in the Air: Sixties Radicals Turn to Lenin, Mao and Che (Verso Books, Third Edition, 2018).
Subscribe to Portside