What the Texas Abortion Ban Means For People Seeking an Abortion

This is the first time a six week ban has gone into effect and the ban has handed enforcement to private citizens, rather than authorities. The bill allows private citizens to file civil lawsuits against anyone they believe “aids and abets.” 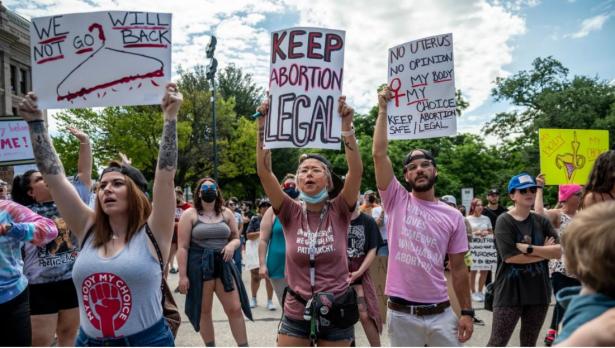 Protesters hold up signs and cheer at a protest in Austin, Texas in May., Photograph: Sergio Flores // The Guardian

At 10 p.m. on August 31, the staff at Whole Woman's Health of Fort Worth had 27 patients in the waiting room. The clinic usually closes at 5 p.m., but that night, they wouldn't shut their doors until 11:56 p.m. Doctors were crying, wondering how they'd treat everyone in the waiting room before midnight. But, just four minutes before a near-total abortion ban went into effect in Texas, they managed to treat each of the 27 people who went to the clinic to race the clock.

On September 1, Senate Bill 8 took effect in Texas, banning abortion after about six weeks of pregnancy and allowing private citizens to sue anyone they suspect of knowingly providing or helping someone get an abortion. According to abortion advocates, 85 to 90% of people who seek abortion in Texas are at least six weeks pregnant, meaning SB8 effectively bans almost all abortion across the state.

This marks the first time a six week ban has been allowed to go into effect, after the Supreme Court failed to act on an emergency request to prevent the law from moving forward. It's also the first time an abortion ban has handed enforcement to private citizens, rather than authorities. The bill allows private citizens to file civil lawsuits against anyone they believe “aids and abets” a pregnant person in accessing abortion in the state. According to the Guttmacher Institute, this structure makes federal court intervention harder.

If the plaintiff in these cases wins, they will receive a minimum $10,000 payment from the defendant, along with coverage of their court and attorney costs. Marc Hearron, lead attorney in the lawsuit attempting to stop the ban, and senior counsel at the Center for Reproductive Rights, said in a call with reporters that there is no penalty should a plaintiff lose their suit.

“[This bill] creates a vigilante scheme where it allows private systems to hijack the Texas court system and sue providers, abortion funds … anyone who supports a patient getting an abortion is at risk with this pernicious law,” Hearron said.

While the law has only been in effect for a few hours, clinic staff and advocates in Texas say the impact has been immediate. Amy Hagstrom Miller, CEO of Whole Woman’s Health and Whole Woman’s Health Alliance, described the crowded waiting rooms ahead of the ban. At the organization's Fort Worth location, Hagstrom Miller said anti-abortion protesters set up bright lights in the parking lot, which she believed was to “surveil” patients and staff.

Vanessa Rodriguez, call center manager at Planned Parenthood of Greater Texas, said she and her team are hearing from angry, scared, and confused patients who are trying to understand the challenges they now face to accessing their healthcare, on top of the existing restrictions Texans face.

“My team … hears patient concerns about the additional cost of travel, taking time off work for [two visits], finding child care. We know how much harder all of this becomes when the patient is lower income, undocumented,” she said. “For many people, it will simply be insurmountable, and we have to acknowledge you’re taking that choice away from people.”

While many clinics across the state are open and providing abortion in compliance with the new law, the Houston Chronicle reports that some clinics prepared to close once SB8 took place, a familiar predicament for many Texans. Prior to SB8 taking effect, Texas already had some of the harshest abortion restrictions in the country, requiring patients to attend state-directed counseling at least 24 hours before their abortion, get an ultrasound at least 24 hours before the procedure, and requires minors to get parental consent. And, the state has seen a litany of anti-abortion bills in the past that have shuttered clinics and forced patients to either seek care out of state (a more costly and time-consuming endeavor that not everyone can afford) or carry out unwanted pregnancies.

At the start of the COVID-19 pandemic, Gov. Greg Abbott banned abortion in Texas, calling it an unnecessary medical procedure and citing the need to keep medical facilities open for COVID patients.  (Despite soaring COVID number currently, Abbott has refused to enact any safety measures, claiming Texas is “past the time of government mandates” when it comes to the virus.) In 2016, a court overturned a Texas law that would place undue requirements on abortion clinics, but many clinics had already closed by the time it was reversed.

While the ban taking effect has already had an impact on Texans, Hearron said it's not clear what will happen next. Though it didn't intervene in time to prevent the ban from starting, Hearron said the Supreme Court may take action in the coming days. In the meantime, patients seeking abortion in Texas can still access it if they are fewer than six weeks pregnant. Abortion funds are also on hand to direct patients to clinics in other states.

As for how the ban might ripple into other states, Hearron said it's not uncommon to see copy cat bills when it comes to abortion restrictions. Many states have attempted to ban abortion at six weeks, only to be blocked by courts. Texas' successful bill may inspire states that have attempted and failed in the past to take the same approach. But regardless of one's view on abortion, Hearron said everyone should be concerned about the implications of SB8.

“If a state can simply outsource its enforcement authority to private citizens and...deputize them to sue people for simply recognizing a fundamental right thats protected in the Constitution's Bill of Rights,” he said, “that allows any state to do so...about any individual right.”

[Brittney McNamara is an award-winning journalist and editor who has been reporting on issues including health, identity, and sexual assault since 2014. She is Identity Editor on Teen Vogue.]